How Many Sloths Are Left In The World? Fun Facts For Kids | Kidadl

How Many Sloths Are Left In The World? Fun Facts For Kids 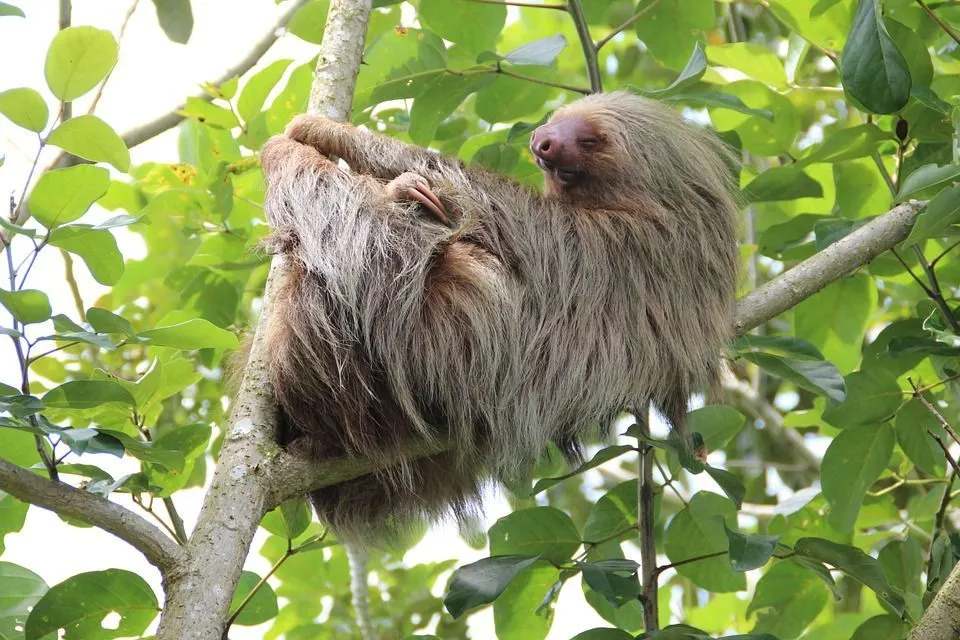 Female sloths produce one baby per year. The baby learns to eat by licking the mother's lips.

Sloths are recognized as an arboreal Neotropical group of mammals within the Folivora suborder. Many sloth species lived between the Early Oligocene and Holocene epochs. Famous for slowness in movement, sloths spend most time hanging upside-down from trees in the tropical rainforests of Central America and South America. These animals are closely related to anteaters. There are currently six species of sloths. These animals were named sloths because of their deliberate movements and very little metabolism. Sloths translate to 'laziness' and have names in other languages that translate to 'lazy'. The slowness of sloths' movement permits them to stay on a low-energy diet consisting of leaves and avoid detection from predators like cats and hawks hunting by sight. Although sloths can swim, they are helpless on the ground. Their shaggy coat has grooved hair that hosts symbiotic green algae that camouflage this animal on tress and also provide nutrients.

The conservation status of species ranges from Least Concern, Vulnerable, to Critically endangered as per the IUCN Red List of Threatened Species. The Sloth Institute in Costa Rica, Central America care, rehabilitates and releases sloths back into the wild. The average life expectancy of sloths in captivity is 40 years and the life span in the wild is not known.

If you enjoyed reading these facts about how many sloths are left in the world, then make sure to read some more interesting facts about how much weight can a horse carry and how long do rabbits live here on Kidadl.

There is no data on the exact number of species of sloths. There are fewer than 100 pygmy sloths in the world.

What sloths are endangered?

The pygmy three-toed sloth is restricted to Isla Escudo de Veraguas, a small island off the coast of Panama. The conservation efforts for pygmy three-toed sloths are getting impacted by conflicts between the government and local people. The population of these sloths has mainly declined due to changes in the environment. Pygmy sloths resemble brown-throated sloths but weigh a lot lesser than brown-throated species. Maned sloths are only found in Brazil and are currently Vulnerable. Maned sloths are the largest species among the three-toed sloths. There is not much information available about how well they do in captivity. These species are named so because of their lion-like mane.

Reasons For The Decline Of Sloth Population

Reasons for the decline of the sloth population are deforestation, fungi and algae attack, electrocutions, vehicle collisions, illegal trafficking, and poaching, and habitat loss.

The extinction of sloth species started when humans evolved on Earth around 12,000 years ago. However, climate change also made an impact on their population. The habitat range might be limited but that environment has been successfully providing a healthy home to sloths. 70% of the biomass among arboreal species is estimated to be sloths on Barro Colorado Island, Panama. The maximum population decline of sloths was due to habitat loss. Continuos rainforests hold sloths and sloths are unable to travel long distances. They get on the ground for defecating and to reach the next tree. So, getting off of trees to poop makes them vulnerable to predators and increases their chance of getting killed. Also, due to decreasing trees sloth population has declined. This also forces them to cross roads through crawling due to a lack of canopy bridges, which causes roadkill. The survival rate after electrocution of sloths is only around 25%. The use of pesticides or habitat fragmentation is resulting in birth defects and genetic deformities. Now that homes are being built in between forests, sloths are attacked by domestic dogs.

Here at Kidadl, we have carefully created lots of interesting family-friendly facts for everyone to enjoy! If you liked our suggestion for how many sloths are left in the world, then why not take a look at how much does a silverback gorilla weigh or two-toed sloth facts.