Interesting Bible Facts That Everyone Should Know About! | Kidadl

Interesting Bible Facts That Everyone Should Know About! 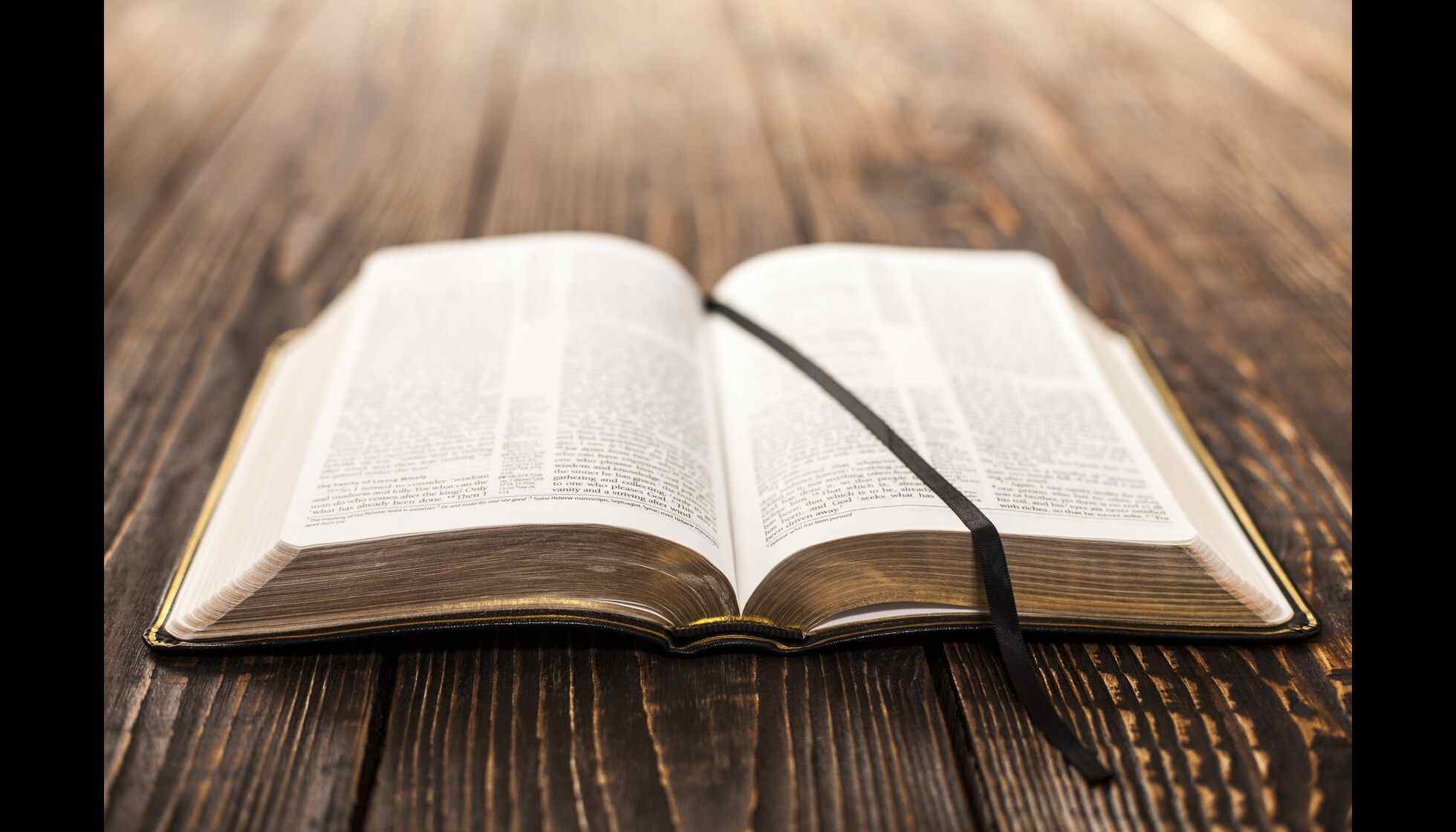 There is an amazing truth about the Bible, that it is historically accurate. The events written in the New Testament were also written by some historians at the same time when the Bible was written.

The word Bible is derived from the Greek word bíblos, meaning 'book'. The entire Bible is divided into parts- The Old Testament and the New Testament. They both together form the sacred book of Christianity, the Holy Bible, and contain the word of God. Did you know that originally the Bible consisted of 80 books? Well, today there are only 66 books in the Bible. The longest book in the Bible is the ‘Psalms’ with 150 chapters and 2,527 verses. The shortest book in the Bible is ‘The Epistle of Jude’ with only one chapter and 25 verses. The Bible has 1,189 chapters and was written by around 40 authors but it has no contradiction in it, though some people find the contradiction by taking the verses out of the context. The longest word in the Bible is 'Mahershalalhashbaz'. After reading about these lesser known Bible facts, you will also like to check basketball facts and zodiac facts.

Who really wrote the Bible?

Did you know that Bible is the most shoplifted book in the world? The Bible is not just a holy script written by one community or tradition. There are many books from other traditions which are included in the Bible. The books of the Bible are represented by the word ‘Canonical’. This is a sign that the Holy Bible represents God’s word and will. The Bible is generally associated with Christianity but, it is a collection of religious texts related to many communities such as Islam, Judaism, Rastafari, Samaritanism, Christianity, and many more.

The Old Testament is believed to be written by Moses, a Hebrew prophet. He was the one who led the Israelites out of Egyptian captivity. The first five books of Bible, the Old Testament are called the five books of Moses. But, today most scholars agree that the text in the Bible was written by different groups of people. On this basis, they divide the Bible into various sections or blocks. Scholars believe that the stories and laws written in the Bible were originally conveyed to people orally over centuries, through poems and prose. Later, people began to write them down and completed the writings around the 1st Century B.C.

The Old Testament is all about the stories of Israelites which led to the birth of Jesus Christ. The New Testament is all about Jesus’s life, his teachings, his death, and resurrection. This all forms the very basis of Christianity. Matthew, Mark, Luke, and John are believed to be the most devoted disciples of Jesus and the four canonical gospels who eyewitness various accounts of Jesus’s life.

Traditionally, 13 of the 27 books of the New Testament are attributed to Paul, the Apostle. Paul met Jesus on the road to Damascus and converted to Christianity. He wrote many letters that helped in the spread of the faith in Jesus in the Mediterranean world. But now only seven of his epistles are considered authentic.

What is moral truth in the Bible?

The Bible is primarily about religious truths. It is about the relationship of God and God’s people, the Hebrews. It tells us about how God treated his people and how they responded to it. The Bible also deals with moral truths. Moral truths are those things that tell us what is wrong and what is right, just as your parents and teacher tell you about what to do and what not to do. They all get it from the Bible.

Moral truths like non deception, listening to the word of God (Bible), non hatred, sweet tongued, respect, brotherhood, meditation, integrity, faith and virtue, self control, discipline, mercy, trustworthiness, prayer, worship, honor, and many more, all are derived from a number of verses in the Bible. These form the base of beliefs in Christianity.

Are there scientific facts in the Bible?

A lot of people consider the Bible as a mere collection of only religious writings. People believe that the Bible is the book of revelation, and revelation is religious truth, not a scientific one. But the Holy Bible is much more than that. It has many scientific truths which many of us do not know. It has many truths about Earth, Sun, and the Universe, which at that time were not discovered by science.

Today, you know that our Earth is one of the many planets in space and has its own gravity. At the time when the Bible was written, it was believed that the earth is held on the back of an elephant or a turtle. But the Bible states that Earth is not hanged or attached to anything. It is free floating in space. Also, Earth was considered flat and the sun was believed to be set in the sea. But the Bible states that the Earth is spherical and the Sun does not move anywhere, it is stable at its position.

The Bible states about the presence of the atomic particles almost 2000 years earlier than the discovery of atoms by science. And also, the Bible states the fact that our body is made from the dust of the ground, while scientists discovered this very late.

You must have known that there are mountains and deep trenches in the ocean. This fact was discovered by scientists only in the last century. But the Bible states this fact at that time when no one even thought of exploring the oceans.

The bible also states astronomy. It describes the Pleiades and Orion star clusters so beautifully. Isn’t it surprising that how the writers of the Holy Bible know these scientific facts way earlier than science can even think of it?

Where is the original Bible kept?

Did you know that Moses wrote the first five books of the Bible?

The Bible has been written many times and under a number of denominations based on the traditions of different communities. Many books were added and many were removed from the original Bible. There are many versions of the Bible, and the New Revised Version of the Bible is the most commonly used by scholars. All the versions of the Bible are just the translation of the original Bible which was written in the 1st Century B.C.

How long after did Jesus died after the Bible was written?

Jesus Christ marked the beginning of Christianity in this world. The entire New Testament in Christianity is about his life and teachings. This is called Gospel. The Gospel itself has five Gospels, Matthew, Mark, Luke, John, and the Christian. People generally know only about the fifth gospel. Every Gospel reflects different ideas with the same life lessons. The four Gospels were written after a century of Jesus's death.

The first gospel was written after almost 40 years of Jesus's death. After his death, his teachings and sacred words are written in the form of the New Testament. Did you know that there are at least 4 Jesus in the Bible? Jesus means the son of God. Jesus Christ was one of them. There are many copies of the Bible that are regarded as important in different sects of Christianity, and one of the most popular biblical versions is King James Bible. Catholics prefer mostly the New American Bible or the Jerusalem Bible.

What are the beliefs of Christianity?

A person is considered a Christian because he is a follower of Jesus Christ and goes to Church. But other than being just a follower, there are many rules and laws to which the person abides and as being a Christian. Just as any religion in the world, Christianity also has some beliefs which you should know. These are the things which your parents might have told you many times but just read them once again to know more about it.

The biggest belief of Christianity is the belief in God. Here, God does not mean the God which you pray in the Church, here God is a supreme being that is invisible but present everywhere to help you whenever you need him.

Another great belief of Christianity is that Jesus Christ died for the sins of all humanity. According to Christianity, Jesus was God’s son. He came to Earth in the form of a human being. He was the word of God. Other than this, there are many more beliefs of Christianity, which you can find by reading the Bible, the true word of God. If you think that the Bible is just a book for old and religious people, just take a look at the next question. That will bring some excitement in you to read the Holy Bible.

You might think that the Bible has only some boring texts which have very heavy meanings, just like your maths textbook. But no, the Bible has approximately 185 songs in it. And do you know that almost 150 of them are only from Psalms? Psalms are also the longest chapter in the Bible. Isn’t it interesting?

The Holy Bible is written on three continents of this world: Asia, Africa, and Europe. Most of the part of the Old Testament is in Israel, that is in Asia. Some passages of Jeremiah are written in the African country, Egypt. Many epistles in the New Testament are written in many cities of Europe.

Do you know what the last word in the Bible is? It’s 'Amen'.

Here at Kidadl, we have carefully created lots of interesting family friendly facts for everyone to enjoy! If you liked our suggestions for Interesting Bible Facts That Everyone Should Know About! Then why not take a look at Where Do Strawberries Come From? Amazing Berry Facts For Kids, or Where Did The Name America Come From? Cool Continent Facts For Kids facts pages?