What Is A Group Of Jellyfish Called? Why Do They Move In A Group? | Kidadl

What Is A Group Of Jellyfish Called? Why Do They Move In A Group? 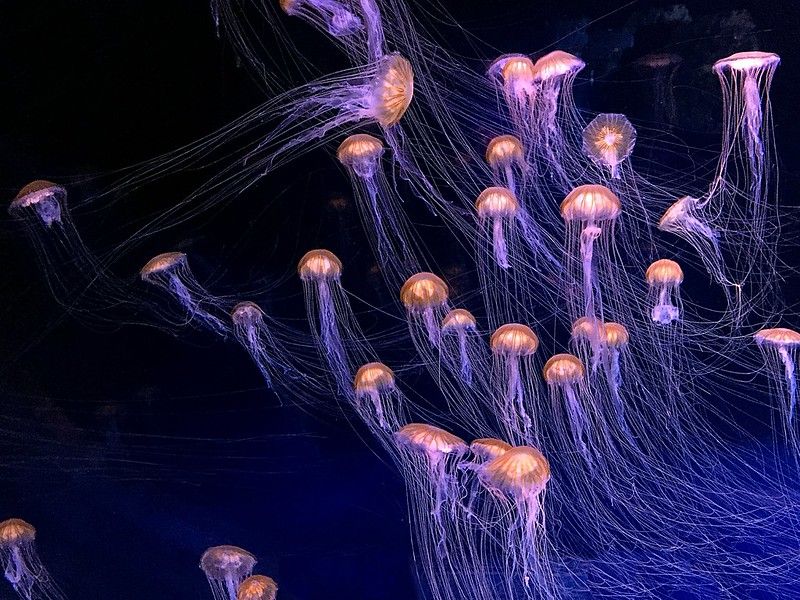 Jellyfish are primitive creatures; they have existed on our planet for millions of years.

Jellyfish are called so because their bodies are typically gelatinous and jelly-like. They are primarily made up of water and protein of about 95% and 5%, respectively.

Jellyfish belong to the phylum Cnidaria and the class Scyphozoa of the animal kingdom. Different species of it vary in size and weight. Some species are as small as a human thumbnail, while some are as long as 6-7 ft (1.8-2 m) in length. Some weigh a few ounces, while some can weigh over 4 lb (1.8 kg). They are found in the ocean waters across the world and are known to inhabit cold and warm waters. They are found along coastlines and in deep and shallow waters as well. Although the name jellyfish has the word 'fish', they are not a type of fish. Jellyfish are invertebrates, meaning they have no backbones, and unlike fish which breath through gills, jellyfish get oxygen from the water through their membrane.

What is interesting about their anatomy is that they do not have any brain, heart, or eyes. They have a sack-like body from which sprouts tentacles like arms with poisonous cells. They sting their prey to paralyze it before devouring it. Some jellyfish are transparent, while some varieties come in vibrant hues of orange, pink, purple, and many other shades. Some varieties of jellyfish are also bioluminescent. The mouth of jellyfish, located at the center of the body, is used to both eat its prey and excrete waste! Their food typically consists of fishes, crabs, shrimps, and aquatic plants, and they can digest them rather quickly. Quick digestion is essential for them to stay afloat or be weighed down by the food they consume. Jellyfish also uses its mouth to move around; it squirts water from it, which helps them to propel forward.

Jellyfish are a regular food for sea animals like turtles. The stings of jellyfish are painful to humans, and the sting of certain species of jellyfish can be deadly. Jellyfish do not attack humans on purpose; instead, they sting anyone who comes too close to them.

What is a group of jellyfish called?

A group of jellyfish is typically called a smack, bloom, or swarm. Even though these terms are used interchangeably, they are used for a group of jellyfish in a specific context. When a group of plants or animals appear together suddenly, it is referred to as bloom. It also signifies a seasonal aspect when the surroundings are conducive to their gathering. So, the term 'bloom' is used when jellyfish are unexpectedly seen in large numbers in a small area. Spring is the time when jellyfish typically come into existence from their benthic polyps. It is the time when sunshine is plenty and plankton abundant, and suddenly a massive number of jellyfish can be spotted in areas with favorable conditions.

Smack is another collective word used to call a group of jellyfish. It is a colloquially literal term and is not used by researchers and scientists who study these creatures.

The word 'swarm' usually means the ability of some creatures to stay together in a group actively. Since jellyfish demonstrate this ability, a group of jellyfish is also referred to as a swarm.

Why is a group of jellyfish called a smack?

Did you know that the box jellyfish is perhaps the most poisonous marine animal around the world? Anyone coming in contact with the venomous tentacles of some types of boxfish like the malo kingi or the Irukandji jellyfish can go into cardiac arrest or succumb to death within minutes.

Do you know what the literal meaning of the word 'smack' is? A slap or a sharp blow rendered with the palm as a way of punishing someone. That is how it feels when you accidentally find yourself in the middle of a group of jellyfish and touch it accidentally, and it stings you.

Is a group of jellyfish called smack or bloom? Why?

The reasons why the collective nouns smack or bloom are used to denote jellyfish groups vary.

As we have discussed earlier, a group of jellyfish is known by collective words like smack and bloom. You see, smack is more of a literal term that is inspired by the jellyfish sting. In contrast, bloom signifies an unexpected increase in the number of jellyfish in a particular area because of the nature of its life cycle. Generally, bloom is a more commonly used word to denote a group of jellyfish.

To understand why the word 'bloom' is used to refer to a swarm of jellyfish, one needs to understand the lifecycle of a jellyfish properly. For a primitive creature like jellyfish, its life cycle is complex and consists of sexual and asexual phases.

The sexually mature stage of a jellyfish is known as the medusa. During this stage, the adult male and female jellyfish releases sperms and eggs into the water. When the egg is fertilized, a planula is formed. It is the larval stage of a jellyfish. The planula attaches itself to rock surfaces underwater, and there begins another stage of its lifecycle, the polyp. A jellyfish can remain in this stage of life for many months and even years. In the polyp stage, some species of jellyfish reproduce asexually by budding. From the polyps, the jellyfish reach the ephyra stage and from there transform into adult jellyfish. It is a general sequence of their lifecycle, and there can be some variations in certain jellyfish species. For example, some species of jellyfish might skip some particular stage, while in some species like the moon jellies, the fertilization happens internally. The adult jellyfish regularly spawn whenever the conditions are ideal, like an abundant food supply and conducive climatic conditions.

Blooms are seen when the environmental factors needed for the polyps to transform into jellyfish are met. Jellyfish can survive well in waters with low oxygen concentration as compared to their competitors. So, they can be sighted in hypoxic dead zones where no other aquatic life lives. With no predators and other environmental factors met, like sunshine, the right temperature, ocean currents, and nutrient-rich water, jellyfish gather in large blooms.

How many jellyfish form a group?

Blooms of jellyfish are a different phenomenon because it is not about moving in a common group but about a stage in their lifecycle when they transform from their polyps stage. While blooms may look pretty and colorful and are a sight to see from a distance, they are detrimental to the fishing industry. For example, blooms lead to a decrease in the quality of the fish catch. They get caught, impair the fishing gear, and stall the growth of economically profitable fish species.

If you have ever encountered a swarm of jellyfish underwater, you would know that it is quite a show. There are thousands of them in a group, even in a small area, and it is not feasible to estimate the exact number of jellyfish in bloom.

Why do jellyfish move in a group?

Sighting multiple jellyfish together in a swarm in the ocean waters is not an uncommon sight. When we talk about jellyfish in a group, it is understandable for you to wonder why jellyfish move in a group. Are they social marine animals who like to live and travel together? Or do they form groups unintentionally and move with the wave?

Remember, jellyfish do not have brains. So, by design, they are not social marine animals who live in groups for their social needs like company. More research needs to be properly undergone to understand the social life of jellyfish. However, from what scientists have discovered about these amazing marine creatures till now, we may conclude that jellyfish travel in groups because it helps them wade through the water current. Most species of jellyfish are not active swimmers; they drift with the flow of water. So, they do not travel in groups to exhibit typical schooling behavior but to form coverings underwater for ease of movement.

What is the difference between a group of jellyfish and octopus?

The main similarity between jellyfish and octopus is that both are aquatic invertebrates and have soft bodies. Jellyfish come under phylum Cnidaria, while octopus comes under phylum Mollusca.

However, they are very different animals regarding their anatomy and physiology, and there are not many common characteristics between them. We know collective nouns used for jellyfish groups, but there are no such agreed collective nouns for a group of octopus. Octopus is a solitary animal and doesn't typically dwell in groups. They might be sighted in groups when mating or if a food source is abundant in an area.

Now that we know about the words used to denote jellyfish groups, let us check out some cool fun facts about these jelly-like creatures.

There are as many as 2000 known species of jellyfish. Some of them have the weirdest names you can think of. For example, have you ever heard names like purple people eaters, blue blubber, pink meanies, and busy bottoms? Yes, all these are names for some species of jellyfish.

Box jellies are the deadliest type of jellyfish. One box jellyfish can kill as many as 60 people with its venom.

Turritopsis dohrnii is also known as the immortal jellyfish due to its ability to clone itself into a polyp and continue to live when starved or injured. It can then grow into an adult jellyfish genetically identical to its previous self.

As many as 25 varieties of jellyfish are edible. They are consumed as a delicacy in south Asian countries like China, Thailand, Korea, Indonesia. If you want to try it, be aware of which jellyfish is safe to consume.

Over 2000 jellyfish were sent to space as a part of some experiment in 1991. These jellyfish reproduced to produce 60,000 more jellies. However, when these space-bred jellyfish were brought to earth, they didn't function normally.