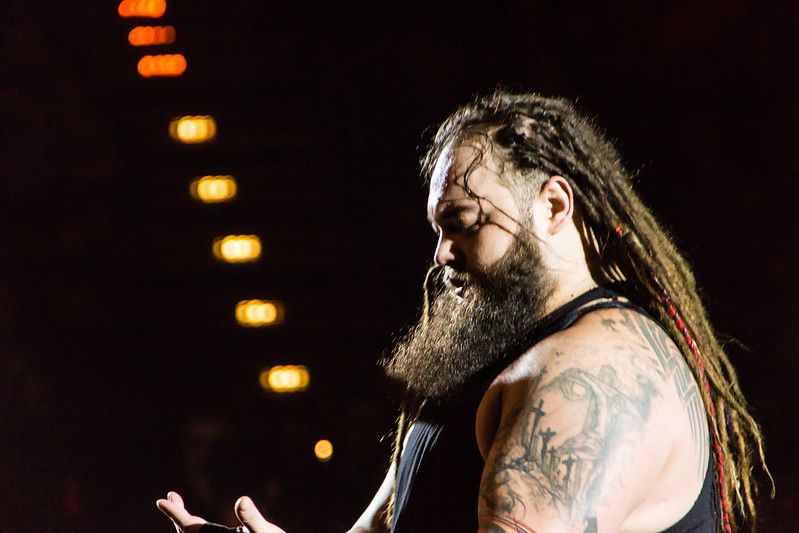 His most popular WWE ring name is Bray Wyatt. He is also known as 'The Fiend'.

Windham Lawrence Rotunda made his wrestling debut in a dark match on February 5, 2009, at the FCW Florida Tag Team Championship, defeating Brian Jossie. Following his debut, he wrestled on WWE's main roster from 2010-2011 as a member of The Nexus, under the ring name Husky Harris.

What is Bray Wyatt's net worth?

Professional wrestler Windham Lawrence Rotunda has an estimated net worth of over $1 million. His primary source of income is his WWE career.

How much does Bray Wyatt earn per year?

Bray Wyatt earned a base salary of $4 million per annum during his tenure with the WWE.

How tall is Bray Wyatt?

How old is Bray Wyatt?

Windham Rotunda attended Hernando High School, where he won his first state wrestling championship in 2005 in the 275 lb (125 kg) category. Apart from this, he played college football as a defensive tackle and guard. He continued his football career at the College of the Sequoias for two seasons, where he earned second-team All-American honors as a sophomore offensive guard. Bray Wyatt was awarded a football scholarship to Troy University, where he played the sport for two years.

Who is Bray Wyatt's partner?

Windham Lawrence Rotunda was previously married to Samantha, and they have two children. Rotunda and Samantha got divorced in 2017, following a five-year-long marriage.

Windham Lawrence Rotunda, better known by his ring names Bray Wyatt and The Fiend, is a third-generation professional WWE wrestler. He was inspired by his grandfather, father, and uncles. His younger brother Bo Dallas is also a professional wrestler in WWE.

Windham Rotunda gained a successful World Cup Accolade in WWE when he became Universal Champion for the first time ever in 2019. He wrestled as The Fiend against Seth Rollins in a falls count anywhere match. The match was held at Crown Jewel, Saudi Arabia.

Bray Wyatt made his professional wrestling debut in 2009 with his younger brother Bo Dallas. They defeated wrestlers Kris Logan and Justin Angel to win the Florida Tag Team Championship. Wyatt also won the FCW Florida Tag Team Championship twice between 2008-2012 while he was playing in WWE. He briefly wrestled from 2010-2011 on WWE's main roster under the ring name Husky Harris.

In 2010, Wyatt adopted the ring name Husky Harris and made his debut on NXT at The Nexus. He turned heel on June 22, 2010, when he attacked Matt Striker, a wrestling announcer. He escaped elimination by moving on to sixth place in the second poll and made regular appearances in the TV series 'WWE Raw'.

In November 2010, Wyatt, under the stage name Husky Harris, and Michael McGillicutty, interfered in a match between Wade Barrett and John Cena. They helped the former win, which forced John Cena to join Barrett's faction, The Nexus. The Nexus is a professional villainous wrestling stable in WWE.

In early 2011, Windham Rotunda returned to FCW under the ring name Husky Harris with a hockey mask. Later in 2012, Wyatt returned from FCW to WWE developmental territories. Following this, Rotunda was rebranded as Bray Wyatt. He debuted on the July 11, 2012, episode of the rebooted NXT at The Nexus, defeating Aiden English. The episode was taped at Full Sail University.

Windham Lawrence Rotunda was named the villainous cult leader of The Wyatt Family, a group that debuted on the WWE main roster in 2013. The family is a professional wrestling stable that competes in the WWE championship. The members of Wyatt's family include Bray Wyatt as the leader, Randy Orton, Daniel Bryan, Braun Strowman, Erick Rowan, and Luke Harper.

Bray Wyatt made his television debut in the TV series 'WWE NXT' as Bray Wyatt or Husky Harris in 52 episodes from 2010-2014. The television series 'WWE NXT' portrays wrestlers as heroes or villains as they follow a series of events building tension and culminating in a match or series of wrestling matches. In June 2015, Wyatt interfered in a Royal Rumble match with his attack directed toward Roman Reigns. Roman Reigns is an American professional wrestler currently signed with WWE, and he was a former professional gridiron football player.

Windham Lawrence Rotunda was relieved from his WWE contract in July 2021.

What awards has Bray Wyatt won?