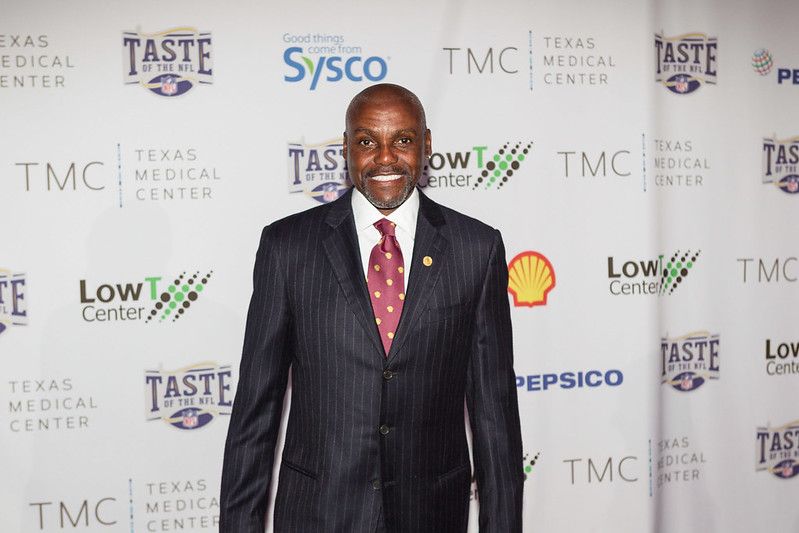 Carl Lewis is an American former field and track athlete.

Frederick Carlton Lewis is popularly known as Carl Lewis. Carl Lewis was born in Birmingham, Alabama, the United States of America on July 1, 1961.

Carl Lewis is a nine-time Olympic gold medalist and has won one Olympic silver medal, and ten World Championships medals, out of which, eight were gold. His career spanned from 1979-1996 when he last won an Olympic event. He is one of the only six Olympic athletes who have won a gold medal in the same separate event in four successive Olympic Games.

What is Carl Lewis’ net worth?

The net worth of Carl Lewis is estimated to be $25 million. The sources of his net worth include his sports career, brand endorsements and his acting career.

How much does Carl Lewis earn per year?

The amount of money Carl Lewis earns per year is not known but he has a world record to his name.

How tall is Carl Lewis?

How old is Carl Lewis?

Frederick Carlton Lewis, popularly known as Carl Lewis, was born in Birmingham, Alabama, on July 1, 1961. Carl Lewis was initially coached by his father. At age 13, Carl Lewis began competing in the long jump and he emerged as a talented athlete while coached by Andy Dudek and Paul Minore at Willingboro High School, New Jersey. He joined the Willingboro track club and he attained the ranking of fourth on the all-time World Junior list of long jumpers. During his high school days, he broke the high school long jump record with a leap of 8.13 m. Carl Lewis was ranked fifth in the world for the long jump at the end of 1979.

Carl Lewis was offered an athletic scholarship from many colleges but chose to enroll at the University of Houston, where the coach was Tom Tellez and he remained Carl Lewis' coach for his entire career. In 1980, Carl Lewis won the National Collegiate Athletic Association (NCAA) title.

Who are Carl Lewis' parents and siblings?

Carl Lewis has two siblings, an older brother named Cleveland Lewis, who played professional soccer for the Memphis Rogues, and a sister named Carol Lewis, who became an elite long jumper. She finished ninth in the long jump category at the 1984 Olympics and took bronze in the 1983 World Championships. She also won the long jump.

Who is Carl Lewis’ partner?

Carl Lewis is married to Maria Lewis. The couple, Carl and Maria, are blessed with a son named Bakim Lewis. Little else regarding his personal life is known, as Carl Lewis likes to keep his private life out of the limelight.

Carl Lewis is best known for the Olympic gold medals he has won, World Championships he has competed in, and the world record he holds. Though Carl Lewis focused on the long jump, he wanted to explore his talent in the sprints. In July 1980, Carl participated in the Liberty Bell Classic, which was an alternate meet for those nations who boycotted the Olympic games. He jumped 7.77 m for a bronze medal and the American 4 × 100 m relay team won the gold medal with a time of 38.61 seconds. At the year's end, he was ranked sixth in the world in the long jump and seventh in the 100 m. On June 20, 1981, Carl won the TAC Championships and in 1981, Carl Lewis became the fastest 100 m sprinter in the world.

From 1981 until 1992, Carl topped the 100m national rankings six times and ranked no lower than third. His performance in the long jump was even better, as he topped the rankings nine times during the same time period and ranked second in the other years. Carl Lewis ran the anchor in the 4 × 100m relay, winning in 37.86s, which was a new world record and the first in his career. On May 14 in Modesto, he became the first athlete to run a sub-10 second 100m at low-altitude with a 9.97s time. In the same year, his earning gold at the World Championships and his other record times made him the number one ranking in the world. On June 19, at the TAC Championships, he set a new low-altitude record in the long jump of 8.79m, and received the world’s number one ranking in that event.

In the 200m event in Los Angeles, Carl Lewis won a third gold medal, which he won with a time of 19.80s, a new Olympic record, and the third-fastest time in history. He won his fourth gold medal in the 4 × 100 m relay when he ran the final leg of the race and he broke the tape with a time of 37.83s, creating a new world record in his name.

During the 1988 Summer Olympics, Ben Johnson won the 100m final in 9.79s and created a new world record, while Lewis set a new American record with 9.92s. However, three days later, Johnson tested positive for steroids, his medal was taken away and Lewis was bestowed gold and accredited with a new Olympic record. In Seoul, South Korea, Carl finally was credited with the 100 m world record for his 9.92s time and in 1966 he appeared at the Atlanta Games. On January 1, 1990, Lewis was the world record holder in the 100 m, although the record did not last long, as on June 14, 1991, another American from the University of Houston, Leroy Burrell, ran 9.90 s, to break Carl Lewis' record. Carl Lewis' world ranking stood for nearly three years. Lewis anchored the 4 × 100 m relay team to another world record, with 37.50s, the third time in the same year that he had anchored a 4 × 100 m team to a world record.

Lewis' first jump was 8.68 m, a World Championship record, and a mark bested by only three others besides Lewis. In 1991, Carl Lewis’ achievements and world records awarded him the ABC's Wide World of Sports Athlete of the Year, which he shared with gymnastics star Kim Zmeskal. As of 2018, Carl serves as an assistant track coach at the University of Houston.

What awards has Carl Lewis won?

The hobbies of Carl Lewis are reading, running, music, and traveling.