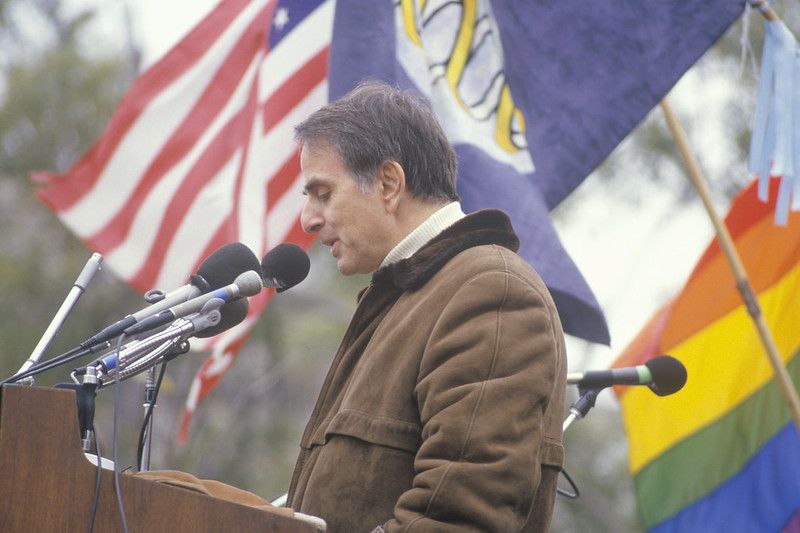 Carl Sagan was born in Brooklyn, New York, on November 9, 1934.
He was a distinguished astronomer, cosmologist, planetary scientist, astrobiologist, astrophysicist, and science writer, best known for his research work on extraterrestrial life. Carl Sagan was also the first person to invent physical messages that could be comprehensible to extraterrestrial intelligence.
In addition to that, Sagan devised and proved his theory on the production of amino acids, where he showed that with the help of radiation, basic chemicals could produce this element. Also, Carl Sagan was the first person to point out that Venus's high surface temperatures resulted from the greenhouse effect. Carl stated that the greenhouse effect might change the climate system of our planet and might turn it into an inhabitable place similar to Venus.
After graduating from high school, Carl Sagan went to the University of Chicago. Here, he completed his bachelor's degree and master's degree in physics and later earned his doctorate also. Subsequently, he joined Harvard University as an assistant professor and later transferred to Cornell University, where he spent the majority of his career. Sagan remained extremely prolific while teaching at Cornell. He published over 600 papers and worked on over 20 books both as an author and co-author. Some of his best books are 'Pale Blue Dot', 'Broca's Brian', and 'The Dragons Of Eden'. Apart from that, he is also the co-writer of 'Cosmos: A Personal Voyage', an award-winning television show from the '80s. Carl Sagan began his career as an assistant professor and went on to become one of the greatest astronomers of his time.
Let's explore the biography of this famous American astronomer and find out more about his childhood, education, best works, achievements, and net worth. So, sit tight and enjoy an informative and entertaining article on Carl Sagan.

What was Carl Sagan’s net worth?

It is estimated that Sagan had a net worth of about around $5 million.

How much did Carl Sagan earn per year?

Unfortunately, Carl Sagan's earnings per year are not known.

How tall was Carl Sagan?

How old was Carl Sagan?

Carl Sagan was born Carl Edward Sagan in Brooklyn, New York, in 1934, to Samuel Sagan and Rachel Molly Gruber. His father was an immigrant from Ukraine who worked as a theater usher in New York, and his mother Rachel Molly Sagan was a homemaker.
Carl belonged grew up with his sister Carol Sagan. From the remarks of his biographer, Keay Davidson, it is found that Carl's mother was also an ambitious woman. However, her prospects and her wish to achieve something in life remained dumped under the heavy burden of poverty, religious ethnicity, and social status as a woman.
Carl Sagan became interested in science at an early age. The astronomer once said that his visit to the New York World's Fair in 1939 (when he was just four years old) was the turning point of his life. At this fair, the four years old Sagan was dazzled by the technologies that he saw in various exhibitions. The following year, Sagan's mother got him a membership in a public library, where he visited regularly and read books about nature and stars.
Sagan's inquisitiveness towards science and nature was remarkably handled and nurtured by his parents, who used to buy him several reading materials and chemistry sets. Another influence came from science fiction writers like Edgar Rice Burroughs and H. G. Wells, whose writings made Carl Sagan more interested in space and extraterrestrial life.
Sagan's high-school education began at David A. Body Junior High School. Later, the family moved to Rahway, a semi-industrial town in New Jersey, and Carl enrolled at Rahway High School. In 1951, he graduated and went to the University of Chicago. During his undergraduate program, Carl Sagan worked under geneticist H. J. Muller and chemist Harold Urey.
Carl Sagan earned his B.A. degree in 1954, his B.S. (physics) in 1955, and his M.S. (physics) in 1956. Finally, he completed his doctoral thesis, 'Physical Studies Of Planets', in 1960 and submitted it to the Astronomy and Astrophysics Department.

Who was Carl Sagan’s Spouse?

Carl Sagan has been married thrice. His first wife, Lynn Margulis, was a renowned biologist. The couple exchanged their marriage cows in 1957 and got divorced in 1964. They had two children together: Dorian Sagan and Jeremy Sagan. In 1968, Carl Sagan married the famous artist Linda Salzman. The couple was blessed with a child, Nick Sagan, and separated in 1981. During his first two marriages, Sagan was wholly focused on his career. It is believed that this was the reason that led to the divorces.
However, Sagan's third marriage did not end in a divorce. The astronomer married Ann Druyan, a distinguished author, in 1981. The couple had two children together, Samuel Sagan and Alexandra (Sasha) Sagan, and Druyan remained together until his demise in 1996.

Carl Sagan started his professional career by joining Harvard University as an assistant professor. After a few years, he moved to Cornell University, where he taught astronomy and space sciences. Later, Carl also became the Director of the Laboratory for Planetary Studies and the Associate Director of the Department of Radiophysics and Space Research at Cornell University.
When it comes to his writing career, Carl Sagan has written several extremely important books. In 1966, the astronomer published two books; the first one, 'Intelligent Life In The Universe', was about extraterrestrial intelligence, and the second one, 'Planets', was a book on planetary science.
His next work, 'The Cosmic Connection', came out in 1973 and was followed by 'Communication With Extraterrestrial Intelligence', which was published in 1974. In his book, he proposed his theory of a communication method through which we can communicate with extraterrestrial beings.
In 1975, Carl Sagan published one of his most famous works, 'Other Worlds'. In 1977, came out 'Dragons Of Eden'. It was the book that earned Sagan the Pulitzer Prize for General Non-Fiction.
In 1980, the astronomer introduced himself to the world of television by co-writing the award-winning TV show 'Cosmos: A Personal Voyage'. In the same year, Carl Sagan co-founded the Planetary Society along with Louis Friedman and Bruce Murray. This was an international organization for space exploration.
For the following three years, Carl Sagan worked on his next book titled 'Murmurs Of Earth'. It was published in 1983. His next work, 'Comet', came out in 1985.
The last three books that Carl Sagan published in his lifetime were 'Shadows Of Forgotten Ancestors' (published in 1992), 'Pale Blue Dot' (published in 1994), and 'The Demon-Haunted World' (published in 1995).
Talking about planetary science, Carl Sagan has contributed much to this field and helped immensely in the advancement of the American Space Program.

What Awards had Carl Sagan Won?

In his long and incredibly successful career, Carl Sagan received numerous prestigious awards. In 1977, the astronomer received the NASA Distinguished Public Service Medal from the NASA National Aeronautics and Space Administration. In 1981, Ohio State University gave him the Annual Award for Television Excellence for the PBS series 'Cosmos: A Personal Voyage'. In the same year, he received two Emmy Awards for his work 'Cosmos: A Personal Voyage', three Hugo Awards for his work 'Cosmos: A Personal Voyage', and one Humanist of the Year award from the American Humanist Association. In 1987, the Committee for Skeptical Inquiry gave Carl Sagan the In Praise of Reason Award and in and the Issac Asimov Award 1994. In the same year, he also received the Public Welfare Medal from the National Academy of Sciences. He received the Masursky Award from the American Astronomical Society and the Klumpke-Roberts Award from the Astronomical Society of the Pacific in 1974.
Finally, in 1978, Carl Sagan received the Pulitzer Prize for 'The Dragons Of Eden', and in 2004, Carl was inducted into the International Space Hall of Fame.