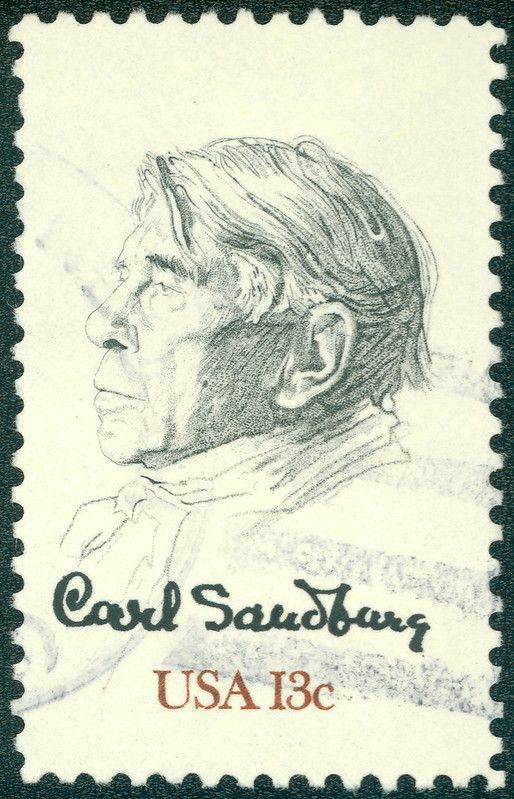 Carl Sandburg was born Carl August Sandburg in Galesburg, Illinois, on January 6, 1878.
Carl Sandburg was a renowned poet, perhaps the greatest one in the USA, who is known for his incomparable contribution to American literature. Some of Carl Sandburg's best works are 'Chicago Poems', 'Some And Steel', and 'Cornhuskers'.
In addition to that, Sandburg also wrote the biography of Abraham Lincoln, for which he was awarded one of his three Pulitzer Prizes. Sandburg won the other two for his brilliant poetry.
Even though Sandburg enjoyed much fame in his later years, he had lived through a harrowing childhood filled with monetary struggles. Such was the condition that the American poet had to leave school to work as a milk-wagon driver when he was just a 13-year-old boy. For the next few years, Carl Sandburg was an employee at the Union Hotel barbershop, located in Galesburg, where he worked as a porter. Subsequently, he worked as a bricklayer, hotel servant, and coal-heaver. Carl Sandburg's life, like most other poets', was filled with both struggle and prosperity.
In the meantime, Carl Sandburg also took a break and attended Lombard College, which inspired him to pursue a career in the field of writing.
Carl Sandburg's writing career began when he joined the Chicago Daily News as a journalist. Later, he became an independent writer and focused more on his poetry. In his long career, Sandburg has produced numerous volumes of poetry, novels, biographies, and film reviews. He also edited several collections of American fairy tales and ballads.
Upon his demise in 1967, Lyndon B. Johnson, the then president of the US, acknowledged Sandburg's contribution in the field of literature by saying that 'He [Carl Sandburg] was America'. In 2013, in one of his essays, 'A Workingman's Poet', Danny Heitman wrote that Sandburg's life, though filled with struggles, helped him explore and experience the different layers of American life, which in turn made Sandburg an unrivaled poet of his time.
Let's explore the biography of this famous poet and shed light on his childhood, education, best works, and achievements. So, sit tight and enjoy an informative and entertaining article on your favorite poet.

What was Carl Sandburg’s net worth?

It is said that the three-time Pulitzer Prize winner had a net worth of around $5 million.

How much did Carl Sandburg earn per year?

There is no information available about the earnings per year of the great poet Carl Sandburg. Most of this money came from the royalties of his poetry volumes, novels, and biographies. Apart from that, the Pulitzer-Prize-winning poet also earned as an editor.

How tall was Carl Sandburg?

Unfortunately, nothing substantial is known when it comes to Carl Sandburg's physical attributes.

How old was Carl Sandburg?

Carl Sandburg was born to August Sandberg and Clara Mathilda in Galesburg, Illinois. The poet grew up in a three-room cottage located at 313 East Third Street. While in elementary school, the poet adopted a new name; Charles Sandburg, Carl became Charles and Sandberg became Sandburg.
Carl Sandburg spent a tough childhood with his six siblings and had to struggle a lot. When the poet was 13, he left school to work as a milk-wagon driver. When he became 14, Carl Sandburg joined the Union Hotel barbershop, located in Galesburg, and worked as a porter. Sandburg remained an employee of the Union Hotel for three to four years. After that, he returned to the milk route and worked there for 18 months. Following this, the poet moved to Kansas and took the jobs of farm laborer and bricklayer. Then the poet moved to Denver and Omaha, where he worked as a hotel servant and a coal heaver, respectively.
The early years of Carl Sandburg's career also include his joining the US Army during the Spanish-American war, where he served in the sixth Illinois Infantry. However, the poet never actually participated in a battle. For two weeks, he went to West Point but, unfortunately, could not pass the grammar and mathematics tests. Later, he enrolled at Lombard College but left the institution without completing his degree. Subsequently, he moved to Wisconsin and started working for a newspaper. During this time, he involved himself in politics and served as the socialist mayor of Milwaukee, Emil Seidel was his secretary. Carl himself confessed that this period, which he spent in Milwaukee, was the most important one of his life, and it also inspired and helped him to become one of the greatest American poets of all time.

Who was Carl Sandburg’s spouse?

According to his personal life, the American writer was a married man. His wife was Lilian Steichen, the sister of Edward Steichen, a famous American photographer. They met for the first time in 1907 at the Milwaukee Social Democratic Party's office. Shortly after, they started dating. Carl and Lilian got married the following year, in 1908, and remained together until he died in 1967.
In their long marital life, Carl Sandburg and Lillan Steichen were blessed with three daughters; Margaret Standburg, Janet Standburg, and Helga Standburg.

Carl Sandburg commenced his writing career in the early '10s. Around this time, he left his college education and started working for a newspaper. Later, Sandburg began writing poems and novels and went on to become one of the greatest American writers of all time.
Carl Sandburg's first poetry collection came out in the year 1904. It was called 'In Reckless Ecstasy' and was originally published as Charles Sandburg by Asgard Press. In the same year, the poet released his second poetry book, 'Incidentals'. For the next four years, Carl Sandburg did not publish any poetry book, and in 1908, he came up with the poetry book 'The Plaint Of A Rose'. After eight years, in 1916, Carl Sandburg released one of his most celebrated works, 'Chicago Poems'. The book was published by Henry Holt publishing house and contained several poems that Carl Sandburg wrote while he was working as a reporter in Chicago. This book includes a poem called 'Chicago' where the poet describes the city vividly. All of Carl's poetry collections were originally published under the name Charles Sandburg.
Two years later, in 1918, 'Cornhuskers' was released. It was also published by Henry Holt publishing house. Through this volume of poems, Carl Sandburg received worldwide recognition as a poet and was also awarded his first Pulitzer Prize. In 1920, Sandburg released 'Smoke And Steel'. The publisher of this book was Harcourt Brace.
Following this, Carl Sandburg did not publish any poetry for almost two decades. His next significant poetic work came out in 1946. It was called 'Poems Of The Midwest' and was published by World Publishing. In 1950, Harcourt Brace published a compilation of Carl Sandburg's poetic works under the title 'The Complete Poems Of Carl Sandburg'. This work earned Sandburg another Pulitzer Prize.
Carl Sandburg published a few volumes of his poetry even after the publication of the anthology of his poetic works. In 1960, the poet released 'Harvest Poems'. In 1961, Sandburg published 'Six New Poems And A Parable', which was published by the University Of Kentucky Press. In 1963, came out 'Honey And Salt'; the publisher of this book was Harcourt Brace.
Some of Sandburg's poetry books were also published posthumously. These are 'A Sandburg Treasury (1970), 'Breathing Tokens (1978), 'Fables, Foibles And Foobles (1989, by University of Illinois Press), 'Arithmetic' (1993), 'Billy Sunday And Other Poems' (1993), and 'Selected Poems Of Carl Sandburg (1996).
Coming to the famous poet's prose works, Sandburg's first nonfiction was published in 1908 by Charles H, Kerr & Company. It was called 'You And Your Job'. His next prose work came out after almost two decades in 1926. It was the first volume of the biography of Abraham Lincoln, 'Abraham Lincoln: The Prairie Years'.
The following year in 1927, Sandburg published a book on folk songs. The work was titled 'The American Songbag'. 'Mary Lincoln: Wife And Widow', one of Sandburg's most famous works, came out in 1932. Following this, Sandburg published his most ambitious work, the award-winning biography: 'Abraham Lincoln: The War Years'. It was a six-volume biography on the life and works of the former president of the US, which earned the poet his third Pulitzer Prize.
In 1948, Carl Sandburg completed and published his only fictional work: a novel called 'Remembrance Rock'. Sandburg himself described this book as a historical epic that deals with the mysteries of the American Dream. The next year, Carl Sandburg published another book on Abraham Lincoln, 'Lincoln Collector'.
Similar to his poetry books, some of Sandburg's prose works were also published posthumously. These are 'The Letters Of Carl Sandburg' (1968), 'The Chicago Race Riots Of 1919' (1969), 'Ever The Winds of Chance' (1983), and 'Carl Sandburg At The Movies' (1985).
Finally, the list of Carl Sandburg's best children's books includes 'Rootabaga Stories', 'Abe Lincoln Grows Up', 'Early Moon', and 'Potato Face'.

What Awards had Carl Sandburg won?

Carl Sandburg is often considered to be one of the greatest poets in the history of American literature. In his long and incredibly successful writing career, Sandburg has won three Pulitzer Prizes, one Robert Frost Medal, and one Grammy Award (for Best Spoken Work Album). Apart from that, he has also received Gold Medal for History from the American Academy of Arts and Letters and honorary degrees from Northwestern University, Knox College, and Lambard College.