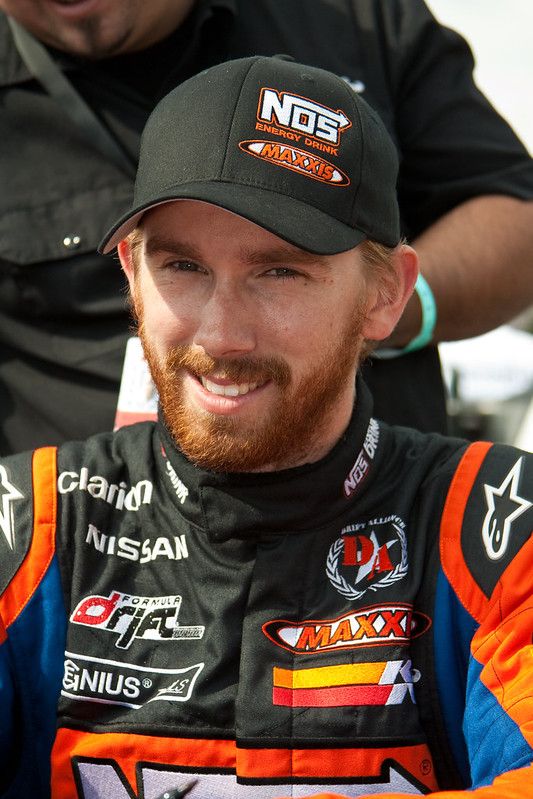 Race driver Chris Forsberg has the zodiac sign Aries and has competed in every round in Formula Drift since 2004.

Chris Forsberg is also known as the Ironman in drift racing due to his fierce competitive mentality. Along with Daigo Saito, Mitsuru Haraguchi, Toshiki Yoshioka, and Vaughn Gittin Jr., Chris is among the five race drivers who have won both FD and Japan's D1 Grand Prix.

Chris has two siblings, and all of them live in California. His brother is Erik, older than Chris, but his sister is younger than him.

What is Chris Forsberg's net worth?

The net worth of Chris Forsberg is around $6 million as of 2022.

How much does Chris Forsberg earn per year?

How tall is Chris Forsberg?

How old is Chris Forsberg?

Born in Doylestown, Pennsylvania, Chris Forsberg discovered his passion for speed and drift at six, when he used to compete with his siblings on a bicycle.

But the seed of competitive racing was successfully planted when Chris' uncle took him to Maple Grove Raceway Park, Pennsylvania, when he was only 10.

At 17, Chris Forsberg got his first car, a 1988 Mazda RX-7, and enjoyed his ride drifting on the east coast. But soon, his license became invalid.

In 2003, learning from his mistakes, Forsberg, along with some compatible workers, hosted the first drag racing event in the parking lot of Old Bridge Township Raceway Park. This paved the way for the grassroots level drift competition in America and introduced Chris Forsberg to drivers like Ryan Tuerck and Vaughn Gittin Jr.

When in 2003 D1 Grand Prix's arrival was confirmed on American soil, Chris, not wanting to miss this opportunity, packed his car in a flatbed rental truck and went to California for the glory and fame.

Who is Chris Forsberg dating?

Like many celebrities, Chris Forsberg likes to keep his family life behind closed doors. However, the Instagram handle of this race car driver reveals his relationship with one Liz Fleming.

Chris Forsberg shocked the entire racing community in 2004 when he shot at the first Formula Drift event, where he broke the record of driver Samuel Hubinete with his SR20- powered Nissan 350Z and also knocked out Japanese driver Kazuhiro Tanaka.

2005 was quite good for Chris Forsberg as he went on to win his first FD race by defeating Rhys Millen. This landed him a lucrative deal in 2006 with Nissan North America; a convertible 350Z with VK56DE V8 was his new weapon, but he couldn't repeat his heroics this time.

Chris Forsberg wanted his own brand and formed his team with Kevin Wells in 2007, and NOS Energy Drink as a sponsor joined in 2008, adding more to his net worth, with 2009 becoming the most successful year in his career. In 2009, Chris Forsberg became the first self-taught driver to win the Formula Drift title along with the Triple Crown Of Motorsport. He also received the Formula Drift Driver Of The Year award.

Chris Forsberg as a driver in 2014, created a record by not dropping any point and by not finishing below fourth place, winning the well-deserved second title. Though they lost their main sponsor NOS Energy Drink, the car was upgraded by 150hp, and nitrous was added.

In 2011, Japan was struck by an earthquake of 9.0 magnitude, which caused widespread destruction on this island country. Countless people lost their lives and homes. In 2016, a charity was organized by ID Agency, Formula Drift Charity Blackjack Tournament in the Aliante Hotel And Casino, where race car drivers, sponsors, media, and member staff were invited whose donations were given to the noble cause. Chris Forsberg was one of the members who took part in this event, along with many renowned personalities like Ross Petty, Vaughn Gittin Jr., and Tanner Foust.

What awards has Chris Forsberg won?

In 2016, he became the Formula Drift USA Champion and World Champion. Along with that, he was the all-time podium finisher in Formula Drift.

Chris Forsberg received the Formula Drift Ace Of The Year in 2013.

Chris Forsberg received Formula Drift Manager Of The Year in 2011.

In 2006, Chris Forsberg was on the team which won the World Drift Series Team Drift Beijing, China.

When Chris Forsberg was young, he loved the Initial D series and JDM Drifting Magazines, which later helped him pursue his career in car racing and motivated him for this competitive sport.

Not only is Chris known as a race driver, he is also fond of building and upgrading cars. Few of his creations include one which is his personal favorite, the 1975 Nissan 280Z. After buying it for just $4,000, he turned this car into a magnificent beast with a wide-body build and a 500hp RB25 engine. Another known as the 'La Flama Blanca' is the Infiniti M45, created by Chris with 500hp and a VK56DE 5.6L V8 engine.

Finally, The Altimaniac is an insane car built by Chris and his team, which has 1300hp and can move to 2000hp if needed. WithVR38DETT as its engine, this car, and the Infiniti are 4-seaters.