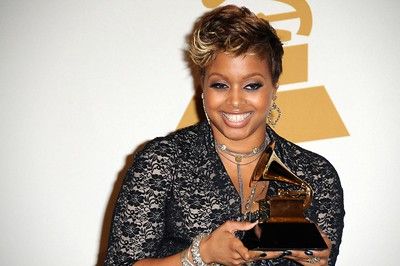 This powerhouse of vocal performance from New York is an R&B singer-songwriter who also performs soul music at times. She has won several awards for her well-written and composed songs.

Chrisette Michele is named on the list of famous people as a singer and songwriter. Her exceptional skills have set an example for many who follow her. Apart from being a songwriter and singer, she appeared in 'R&B Divas' season two and sang for the gospel celebrations. She is known best for her studio albums 'Better' and 'Ephiphany.' She collaborated with famous rappers to give major single hits. She is in a relationship with Doug Ellison as of April 2022. After completing college, she appeared in various music videos of other singers at the beginning of her career as an act of collaboration.

Some of Chrisette Michele's famous albums and songs are 'Epiphany,' 'Be Ok,' 'Fragile,' and 'What You Do.' Chrisette Michele took calculated steps to reach her dream of becoming a singer from a very young age.

What is Chrisette Michele's net worth?

Chrisette Michele has a net worth of $1 million earned throughout her career as a musician.

How much does Chrisette Michele earn per year?

Chrisette Michele's annual earnings per year are unknown in the public database.

How tall is Chrisette Michele?

How old is Chrisette Michele?

Chrisette Michele went to secondary school on Long Island. Ever since childhood, Chrisette Michele has been interested in music. She started singing at the age of four. She even used to perform in gospel music and led choirs. She enrolled and graduated in music at Five Towns College at Dix Hills in New York.

Who is Chrisette Michele dating?

Chrisette Michele is in a relationship with Doug Ellison as of April 2022, but she is not married yet.

Chrisette Michele featured on several hip-hop albums in the early stages of her career. At the same time, she appeared thrice on the Kanye West-produced album 'Still Dreaming,' on the second single of the album 'Can't Forget About You,' and on the conclusive song 'Hope.' For Ghostface Killah, she appeared in 'The Big Doe Rehab' and was featured in 'Slow Down.'

Chrisette Michele appeared on the track 'Rising Up' for the album 'Roots.' She appeared as herself in the song 'What's Black A Lackin' by Girlfriends in 2008. During May and July 2008, Chrisette Michele ventured on a national tour named the Art of Love tour with fellow soul singer Raheem DeVaughn. She acted twice at the 'Evening Of Stars: A Tribute To Patti LaBelle' in September 2008.

In 2009, Chrisette Michelle made her second album 'Epiphany,' and the title track of the album marked the solo entry of the soul singer at number 89 on the Billboard Hot 100. The album has debuted on the Billboard 200 in the first place and sold 83,000 copies. She collaborated with Rick Ross, Canadian rapper-singer Drake, and worked on Ross' 'Teflon Don,' 'Aston Martin Music' and 'So Cool.' She released 'Freedom Reign' with songs like 'Goodbye Game' in November 2010.

Chrisette Michele works for the well-being of children, education, creative arts, cancer patients, and health. She is associated with charity and foundation trusts like the American Heart Association, American Stroke Association, Multiple Myeloma Research Foundation, and Save The Music Foundation.

What awards has Chrisette Michele won?

Chrisette Michele earned various nominations and awards for her work in R&B and jazz music. In 2008, she won the Centric Music Award, and in 2009, she won the Grammy award for 'Be Ok.' Other awards to her credit are NAACP Image Award, BET Award, Vibe Music Award, and more. She is also the winner of the 2010 Rising Star Award at the American Black Film Festival. She got nominated for Best R&B Album at Grammy Awards in 2014.

Chrisette Michele engages in hobbies like learning, photography, surfing the internet, and others. She is also interested in traveling.
Chrisette Michele has her own YouTube channel where she uploads her music.