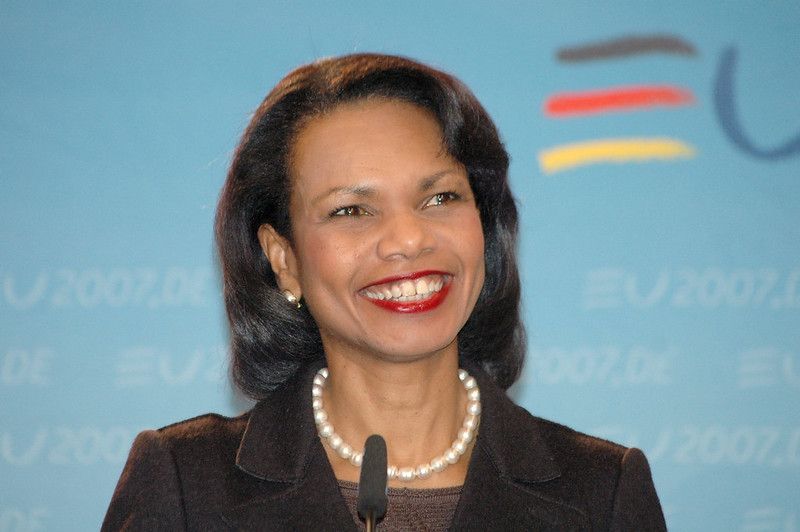 Condoleezza Rice is the first Black woman to hold the US National Security Adviser post under George H W Bush.

She is also the first Black woman who had the post of the US Secretary of State. On November 14, 1954, she was born in Birmingham, Alabama, to John Wesley Rice Jr and Angelena Rice.

She has enrolled in various classes and engaged in many extracurricular activities such as ballet, figure skating, music, and the French language at a young age. Condoleezza Rice became the first Black woman to serve as Secretary of State and the first woman to act as the provost of Stanford University.

Colin Powell was her predecessor as the 65th Secretary of State of the US. She was enlisted by Brent Scowcroft, who was the National Security Adviser in the year 1989, to join the National Security Council as a Soviet expert under the George W. Bush administration. Condoleezza's name is from the Italian term 'con dolcezza,' which gives the meaning 'with sweetness.' Her zodiac sign is Scorpio.

What is Condoleezza Rice's net worth?

Condoleezza Rice's net worth is $12 million.

How much does Condoleezza Rice earn per year?

Condoleezza Rice has her earnings from various income sources. She earns $305,000 from Stanford University, earns about $200,000 per year from serving on the CS.ai board, around $405,000 from being on the board of Dropbox, and has other sources of income as well.

How tall is Condoleezza Rice?

How old is Condoleezza Rice?

She went ahead to earn her Doctorate in Political Science from the Josef Korbel School of International Studies at the University of Denver in the year 1981. After she graduated, she was offered a position at Stanford University as an assistant professor of Political Science, which she accepted.

Condoleezza Rice's father is John Wesley Rice Jr., a minister, counselor, and dean of students. At the same time, her mother, Angelana Ray Rice, was a high school teacher who taught oratory music and science. Condoleezza grew up in Birmingham's Titusville neighborhood, then at the Tuscaloosa's Stillman College campus, where her father was an employee. Her family moved to Denver, Colorado, in the year 1967.

Who is Condoleezza Rice dating?

Rice dated and was shortly engaged to NFL player Rick Upchurch in the '70s but broke the engagement when she thought the relationship wouldn't work out.

From 1981 to 1987, Condoleezza was an assistant political science professor at Stanford majoring in political science, and from 1987 to 1993, she was an associate professor. She has given lectures on the Soviet Union for Berkeley-Stanford. In the US National Security Council, she filled in as the director of Soviet and East European affairs, assisting with creating policies from 1989 to 1991. Her work pulled in consideration of Brent Scowcroft, a previous National Security Advisor in the administration of Gerald Ford.

Rice was designated as the provost of Stanford University in 1993. The position made her the first Black female to hold that post in the school's record. She was actively engaged in terrorism discussions before 9/11. She held a booking to discuss another public safety strategy upon the arrival of the assaults. After the 9/11 event, she interacted with CIA director George Tenet to affirm the administration's endorsement of torture in questioning suspected Al Qaeda individuals. Afterward, in 2003, Rice was a significant advocate of the Iraq invasion.

Upon his re-appointment in 2004, George Bush named Condoleezza to be his next Secretary of State. Here, Condoleezza bids for the increase of democratic governments' participation in the Middle East, attempting to rebuild US diplomacy using her diplomacy agenda. She was also involved in quelling North Korea, South Korea, and Iran nuclear threats. During this period, she traveled extensively, recording one of the highest recorded flights travel as a Secretary of State.

Rice was previously a Democrat before she changed her alliance to Republican in 1982 because of her conflict over the foreign affairs policy made by President Jimmy Carter. Rice had relatively liberal perspectives on abortion under the Bush administration but stood firm on issues concerning LGBTQIA+ rights.

After her political time under Bush, Rice returned to the teaching, where she became a member of the Council on Foreign Relations. She got back to Stanford as a professor of political science. She joined the Stanford Graduate School of Business and was appointed as the institution's director of the Global Center for Business and the Economy.

Aside from her public duties, Condoleezza has sat on the board of directors of various organizations, including the Carnegie Corporation, the Transamerica Corporation, Hewlett Packard, the Chevron Corporation, and Dropbox. In 1992, she established the Center for New Generation, an after-school program intended to increase the graduation rates of high school pupils in East Palo Alto and Menlo Park.

Condoleezza joined the Augusta National Golf Club, becoming one of the first two women admitted; Darla Moore was the other lady. In 2013, Rice was selected as one of the inaugural members of the College Football Playoff selection panel. Condoleezza became the director of the Hoover Institution in 2020.

What awards has Condoleezza Rice won?