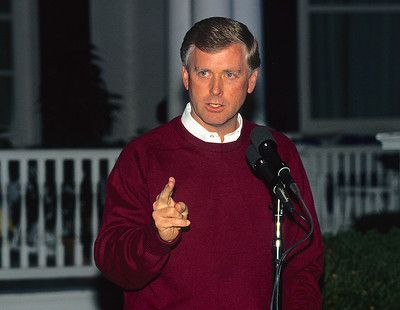 James Danforth Quayle, popularly recognized as Dan Quayle, is an American politician who served as the Vice President of The United States under the Presidency of George Bush.

Dan and his wife, Marilyn Quayle, practiced law before he ran for The United States House of Representatives in 1976. He eventually became a part of the United States Senate in 1980, representing Indiana.

Before entering into politics, Dan Quayle used his law degree by working in the office of the Indiana Attorney General as an investigator for their Consumer Protection Division. This was Dan's introduction to the public service. He then went on to join work as the administrative assistant to Indian Governor Edgar Whitcomb and then served as the Director of The Inheritance Tax Division of the Indiana Department of Revenue. Apart from the government, Dan Quayle worked for his family-run newspaper called the 'Huntington Herald Press' from 1974- 1976 as its associate publisher.

What is Dan Quayle's net worth?

Dan Quayle has an estimated net worth of around $3 million, much of which comes from real estate and his family's publishing empire, as well as his financial work.

How much does Dan Quayle earn per year?

Dan Quayle is presumed to earn within the range of $200,000 to $800,000 annually, much of which is derived from his financial business and family money.

How tall is Dan Quayle?

How old is Dan Quayle?

Dan Quayle was born in the city of Indianapolis, Indiana, to the publisher and businessman James Cline Quayle and Martha Corinne Quayle. Much of his youth was spent in Arizona, where his father managed their family's publishing business. He moved back to Indiana and graduated from Huntington North High School in 1965 and went on to receive his Bachelor of Arts degree in political science in 1969 from DePauw University. After graduating from DePauw, Dan Quayle served in the Indiana National Guard from 1969- 1975, along with earning his law degree in 1974 from Indiana University.

Who is Dan Quayle's partner?

Dan Quayle married his wife, Marilyn Tucker Quayle, in 1972. Both met when they were studying law at Indiana University. Both Dan and Marilyn Quayle have a daughter named Corinne Quayle, and two sons named Ben and Tucker Quayle.

Dan Quayle is best known for being the former Vice President of the United States from 1989- 1993. He has also served in the public office as an investigator in the Consumer Protection Division of the Indiana Attorney General's Office. He has also authored several books on American family values, politics, and elections, including his personal memoir called 'Standing Firm' in 1994.

Dan Quayle got the opportunity to become the running mate of the Republican presidential nominee, George H. W. Bush, in 1988 at the Republican Convention in New Orleans, Louisiana. His vice presidential debate with Lloyd Bentsen earned face because of the latter's remark towards Quayle calling him nowhere near Jack Kennedy when he ran for the vice presidency. This soon became a popular lexicon in politics throughout the entire debate. The Bush-Quayle duo eventually ended up defeating their opponents, making Dan Quayle the 44th Vice President of The United States in 1989.

Dan Quayle performed his role with utmost dedication. During his time serving in the office, he visited up to 47 countries and also served as the chairman of the National Space Council. He was also the chair of the President's Council on Competitiveness which looked at studying the mechanism of the administration for reviewing new federal regulations and reforms for the judicial system.

Following his vice presidency stunt, Dan Quayle was again re-nominated to run for the vice president office in 1992. The 1992 campaign was known the best for his 'Murphy Brown Speech' where he emphasized the need to return to 'traditional family values' and focused on the need for participatory parenting of children in American society. The Bush-Quayle duo, however, lost to Bill Clinton and Al Gore. Despite the loss, the political career of Dan Quayle gained further momentum when he decided to run for president in 2000 and sought the Republican nomination for the same. He eventually withdrew in 1999 when he realized that his candidature was not gaining much attention and went on to support the nomination of George W. Bush, the son of George H. W. Bush.

From here on, Dan Quayle moved away from active politics and engaged himself as an investment banker. In 1999, he joined Cerberus Global Investments, a private equity firm, and soon became its chairman. In addition to this, he has also authored multiple books. He has outlined his moral beliefs in his 1996 book called 'The American Family: Discovering the Values That Make Us Strong' and 'Worth Fighting For', a 1999 book speaking about his 2000 presidential election run, to name a few.

Dan Quayle is the enabler of The Quayle Vice Presidential Learning Center, popularly known as the 'Dan Quayle Museum' in Huntington. Opened in 1993, the museum provided information on former vice presidents of the United States, with a primary focus on those hailing from his home State like Schuyler Colfax, Thomas Hendricks, Charles Fairbanks, Thomas Marshall, Dan Quayle, and Mike Pence. In addition to this, Dan Quayle has spent much of his public service life working for various social causes and helping out the citizens of the United States.

What awards has Dan Quayle won?

Dan Quayle received the McKinney School of Law Distinguished Alumni Award in 1991 from his former law school. He has also been made Honorary Trustee Emiretus of the 'Hudson Institute', a conservative American think-tank in Washington D.C.

Dan Quayle likes to play golf and spend time with his family when he is not working as a public servant.