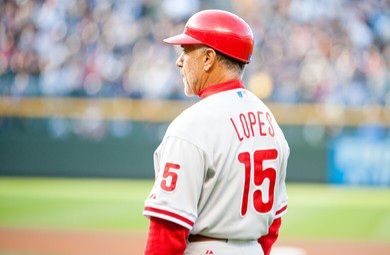 Davey Lopes, the famous baseball player, is popular as the manager in Major League Baseball and an American second baseman.

In 1968, MLB's January Draft second round, Lopes was drafted by the Los Angeles Dodgers. Previously in the eighth round of the 1967 MLB Draft, he was also drafted by the San Francisco Giants, but he did not sign any contract with them.

Davey was a Gold Glove Award winner. Before being famous, Davey used to play baseball for Washburn University and Iowa Wesleyan College. Later on September 22, 1972, he made his debut in the MLB for the Los Angeles Dodgers. He played the MLB for the Chicago Cubs as well as Oakland Athletics.

What is Davey Lopes’s net worth?

The net worth of Davey Lopes is estimated at $1.6 million.

How much does Davey Lopes earn per year?

However, Lopes's net worth is known to us, but his annual income is still unknown and under review.

How tall is Davey Lopes?

How old is Davey Lopes?

Davey took birth on May 3, 1945, in East Providence, Rhode Island, United States. By birth, his name is David Earle Lopes, in an early age, he grew up with his parents and siblings in his hometown.

The name of Davey's father is James Lopes, and Mary Rose Lopes is his mother. Patrick Lopes and Michael Lopes are his two siblings.

Who is Davey Lopes’s partner?

Davey got married to Linda (Lin) Lee Vandover. Their marriage lasted for seven years. They have a daughter named Vanessa, who was born around the time Lopes won World Series.

Davey won two world series, the first one was in 1981 as an active baseball player for Dodgers, and he won the second world series in 2008 as the first-ever base coach of the Philadelphia Phillies.

What awards has Davey Lopes won?