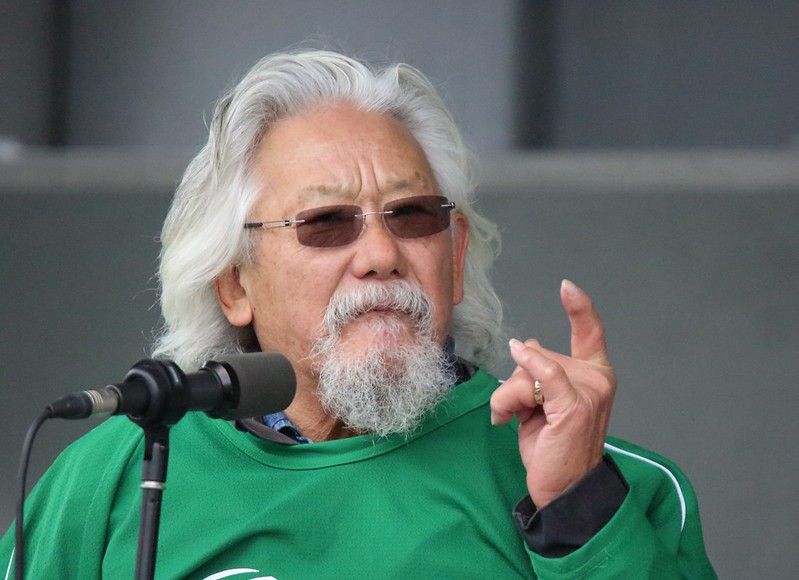 He is famous for hosting the CBC television series 'The Nature Of Things' (1960). David Suzuki was loved by his students and the general population, for he made everything seem simple and explained every complex scientific phenomenon in layman's terms.

The award-winning broadcaster is not everyone's favorite, though. Many governments dislike him for speaking out openly about their failure to implement environmental laws. David Suzuki Foundation is co-founded by David Suzuki. He has tremendous knowledge of the natural history of things and has experience working with nature. Stay tuned to know more about this amazing environmental activist and his early life and net worth.

What is David Suzuki’s net worth?

David Suzuki has a net worth of around $25 million.

How much does David Suzuki earn per year?

No sources have reported how much David Suzuki makes per year.

How tall is David Suzuki?

How old is David Suzuki?

David Suzuki was born a few years before World War II, and this significantly impacted his early life. The family was constantly moved and split up at one point in time. After the Second World War ended, they were forced to move east. The Suzuki family finally settled in London, Ontario.

He studied at Mill Street Elementary School and then attended Leamington Secondary School for Grade 9. Once they settled in London, David Suzuki completed his schooling at London Central Secondary School.

In 1958, David Suzuki graduated from Amherst College in Massachusetts with a Bachelor of Arts degree in Biology. In 1961, from the University of Chicago, he earned a doctorate in Zoology.

Who are David Suzuki's parents?

David Takayoshi Suzuki was born to parents Kaoru Carr Suzuki and Setsu Nakamura in British Columbia. Marcia Suzuki is his twin sister and three of his siblings are named Geraldine Suzuki, Jenny Suzuki, and Dawn Suzuki. His paternal and maternal grandparents emigrated from Japan to Canada in the early 20th century.

During World War II, David Suzuki and his sisters, along with their mother, were separated from Kaoru Carr Suzuki and were shifted to a detention camp. He was shifted to a labor camp. Dawn Suzuki took birth in the camp. When the war ended, so did their nightmare, but they were relocated several times until they settled in Ontario.

Who is David Suzuki’s partner?

David Suzuki first married Setsuko Joana Sunahara in 1958. They were high school sweethearts. The couple's children's names are Tamiko Suzuki, Troy Suzuki, and Laura Suzuki. They got divorced in 1965.

David Suzuki's career is split into academics, broadcasting, and environmental activism. He has immense knowledge in all these fields.

His academic career began in 1961 after his Ph.D. Until 1962, David Suzuki served at the Oak Ridge National Laboratory. After that, David served at the University of Alberta as its assistant professor. In 1963, David became a full-time professor at the University of British Columbia's genetics department. After four long decades, he retired in 2001.

In 1970 his career as a science broadcaster came to life. He was on the TV show series 'Suzuki On Science' for children. He started the radio series 'Quirk And Quarks' and hosted a science program for adults called 'Science Magazine'. In 1979 David Suzuki hosted the documentary series 'The Nature Of Things', which aired in over 40 countries. He has also worked in the documentary 'The Sacred Balance' and Discovery Channel's 'Yellowstone To Yukon: The Wildlands Project'.

Throughout his career, he always supported nature and spoke extensively about human beings' negative impact on the earth. He continues to fight for our planet and wishes we realize our mistakes sooner than later.

David Suzuki is a hardcore environmental activist. He has spoken out about the real dangers of global climate change and its adverse effects on the environment. Since COVID-19, he has mentioned in interviews that climate change is a far worse and imminent threat than the virus itself. And that the virus is only a side effect of the process.

David Suzuki is the ambassador of 350.org, an environmental organization.

What awards has David Suzuki won?

David was awarded the Order of Canada as an Officer in 1976 and then renewed it to Companion status in 2006. David Suzuki received UNESCO's Kalinga Prize for the Popularization of Science in 1986. He is also the receiver of numerous honorary degrees from over 10 universities worldwide.