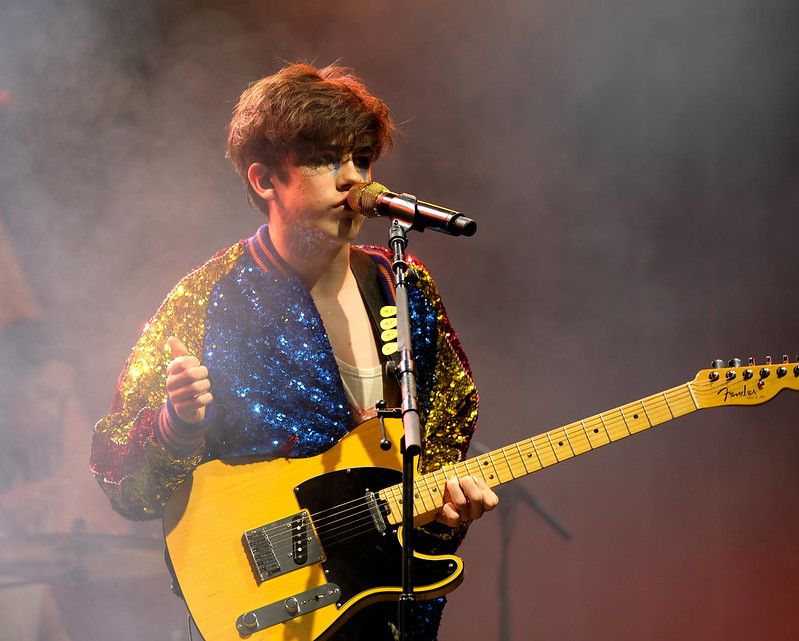 Declan Benedict McKenna is an English singer, music producer, songwriter, artist, and political activist who was born on December 24, 1998.

He rose to prominence after winning the Emerging Talent Competition at the Glastonbury Festival in 2015. In December 2014, McKenna self-released his debut single, 'Brazil', a protest song against FIFA and the 2014 Football World Cup in Brazil.

On Sirius XM Radio's Alt Nation Alt 18 Countdown for January 23, 2016, the song achieved number one and stayed there for three weeks. The song also charted at number 16 on the Billboard Alternative Songs list in the United States. On July 21, 2017, he released the album, 'What Do You Think About The Car?'

What is Declan McKenna’s net worth?

Declan Mckenna's net worth is estimated to be around $500,000, mainly from his career as a rock singer.

How tall is Declan McKenna?

How old is Declan McKenna?

Declan McKenna was born on December 24, 1998 in Enfield, Greater London. He grew up in Cheshunt, Hertfordshire and studied at St. Mary's Church of England High School. His mother was a teacher, while his father was a milkman who also worked in local politics in England. He is of Irish and English ancestry and was reared as a Catholic, however, he no longer sees himself as religious. In the summer of 2015, Johnny started taking his GCSE examinations. He went on to study for his A-levels in English literature, moral philosophy, and sociology, but dropped out after a few months since his music career had taken over his life.

Declan McKenna competed in the Glastonbury Festival's Emerging Talent Competition in 2015. He was voted the contest's winner in April 2015, and he received a £5,000 ($6,037.53) reward as well as a spot on the festival's William's Green Stage. Following his triumph, NME dubbed him 'one of the most sought-after emerging artists' in the UK, and McKenna signed a management deal with Q Prime. McKenna chose Columbia Records out of over 40 record labels that wanted to sign him. He put up around two albums on his website before removing it in August 2015.

Who is Declan McKenna dating?

Declan McKenna is not dating anyone as of 2022. Declan is currently 23 years old and has at least one prior relationship. However, he has never been married before.

McKenna self-released his debut album, 'Brazil', in August 2015. It was first made available on his personal YouTube account on December 2, 2014. The song chastised FIFA, the world governing body of association football, for awarding the 2014 FIFA World Cup to Brazil without addressing the country's widespread and profound poverty.

'Brazil' gained McKenna a lot of attention since many sports analysts thought the song was about the FIFA corruption issue. (Ironically, McKenna's tune, 'Isombard', was used on the soundtrack for the FIFA17 video game released in 2016.)