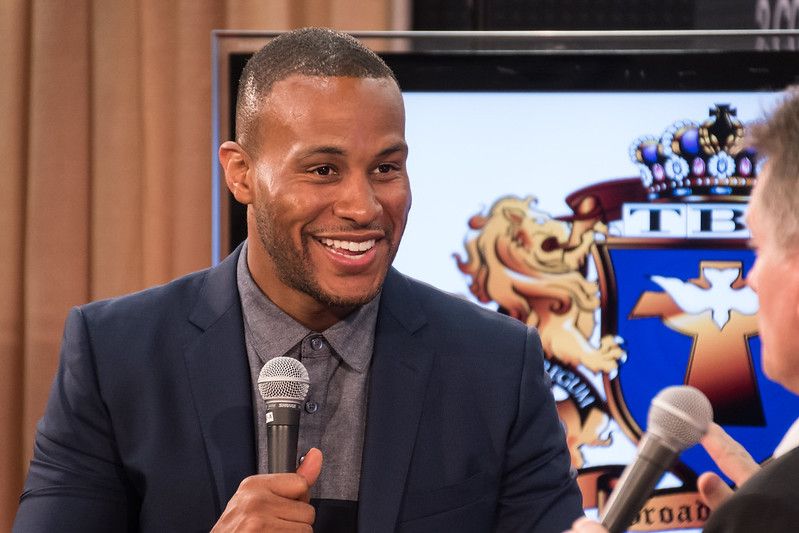 Devon Franklin is a famous film producer, author, and motivational speaker.
He has produced films such as 'The Karate Kid' and 'The Pursuit Of Happiness'. He is known for some of his motivational speeches.
Franklin started his career quite early when he was still studying Business Administration at the University of Southern California. He worked with well-established companies such as Overbrook Entertainment, Metro-Goldwyn-Mayer, and Sony's Columbia Pictures. He also founded his own entertainment company named Franklin Entertainment. He holds the positions of CEO and President of his company.
In addition to producing films, Franklin is also known for being a preacher and a motivational speaker. He has also authored several books, some of which have become best-sellers too. Read on to explore more exciting facts about Devon Franklin.

What is Devon Franklin's net worth?

How much does Devon Franklin earn per year?

Most of Devon Franklin's earnings come from his profession of being a Hollywood producer, CEO of Franklin Entertainment, and an author and motivational speaker. His annual salary is about $1 million.

How tall is Devon Franklin?

Devon Franklin falls under the 14.5% of men's population living in the United States with a height of 6 ft and more. Devon Franklin is 6 ft 1 in (185 cm) tall.

How old is Devon Franklin?

Devon Franklin was born and raised in Oakland, California. After the death of his father, Devon and his brothers were raised by a coalition of women which consisted of his mom and the women who raised her and were close to her. This unique environment while growing up had a great impact on Devon's overall personality. He conveyed his thoughts and gratefulness for the same in an essay he wrote on Mother's Day in 2016.
Franklin increased his interest in activities and academics after he lost his father. He graduated in Business Administration along with a minor in Cinema-Television in 2000 from the University of Southern California. He also used to help his pastor uncle at the church and at 15 years old, he was able to give his first sermon.

Who is Devon Franklin's partner?

Devon Franklin is currently single. He has previously been married to Meagan Good. They both married in 2012 and after nine years of being together, they announced their separation in 2021. They got divorced in September 2021.

Who is Devon Franklin's family?

Donald Ray Franklin I is the father of Devon Franklin, while Paulette Franklin is his mother. Franklin has two siblings, brothers- David Brandon and Donald Ray.

Devon Franklin started his professional career by being an Intern at Overbrook Entertainment during his university years. During this time, he worked for James Lassiter and Will Smith. Franklin accepted the offer of working full-time at Overbrook after he completed his graduation. Later, he worked as a Junior Executive at Tracey Entertainment, owned by Tracey Edmonds.
Franklin entered Hollywood's studio system when he got a creative executive position at Metro-Goldwyn-Mayer (MGM) in 2003. After Sony Pictures Entertainment purchased MGM in 2005, he was offered a new position at Sony's Columbia Pictures as a Director of Development. Due to his great work, Franklin was promoted to the position of Vice President (VP) at Columbia Pictures.
He produced some great movies that became box office hits working in the company. These included 'Jumping The Broom' and 'The Karate Kid.' He became the Senior Vice President Of Production in 2012 and went on to produce brilliant works. Franklin established Franklin Entertainment in 2014. Initially, the company had a deal of first-look production with Sony Pictures Entertainment. Then, the company signed another multi-year first-look production deal with 20th Century Fox in 2016.
In addition to being a film Producer, Franklin is also known as a Preacher who guides people in regard to relationships, spiritualism, and faith. He made his appearance on shows named 'Entertainment Tonight,' 'CBS This Morning,' 'Dr. Phil,' and 'Oprah's Super Soul Sunday.' He is also a well-known author who has co-authored the book 'The Wait' with his ex-wife, Meagan Good.
The notable films of Devon Franklin include 'The Karate Kid,' 'Pursuit Of Happiness,' 'The Star,' 'Miracles From Heaven,' 'Heaven Is For Real,' and 'Breakthrough.' He has also worked on movies such as 'The Pink Panther 2,' 'The Ugly Truth,' 'Sparkle' and 'Not Easily Broken' which is a faith-based movie. He has also written two best-selling books- 'Produced By Faith' and 'The Wait' which is a New York Times best-seller.

As a pastor, Devon Franklin is known to help the people in his surroundings and others in whatever way he is capable of. He showed his support for Minnie's Food Pantry at their annual fundraiser held in California, Los Angeles. He and his wife attended the event and were able to raise funds of about $100,000 through the sale of premier tickets of 'Annie' held at Ziegfeld Theater in New York.

What awards has Devon Franklin won?

Devon Franklin has been greatly appreciated for all of his contributions to the entertainment industry. He won the 'Christopher Award for Feature Films' in 2018. Then in 2019, he was awarded 'GMA Dove Award' for Inspirational Film of the Year. NAACP gave Franklin the title of being a Top 10 Industry Impact Player.

Devon Franklin became interested in cinema and movies from a very young age. He would watch films to understand the perspective used to convey the message and think about how best he can do that too. He is also greatly invested in giving sermons whenever he can.

Devon Franklin is currently living in Los Angeles.
He received recognition as one of the most influential and youngest executives under the age of 35 years by The Hollywood Reporter.
The movie 'Miracles From Heaven' produced by Franklin was nominated for two categories at the 'Teen Choice Awards'- Best Actress and Best Movie for Drama.
The movie won in the latter category.
Franklin is a regular guest on the show called 'The Dr. Oz Show'.
He is also added as one of the visionaries and influential leaders on Oprah's SuperSoul 100 list.
Franklin released his book 'The Hollywood Commandments: A Spiritual Guide To Secular Success' in 2017.
His name was added to the Top 10 Producers To Watch list by Variety Magazine.
Franklin's mother separated from his father and had taken him and his siblings to live with her at her parent's house.
Franklin's father had died at a very young age of 36 years due to a heart attack.
The coalition of women surrounding Franklin included his mother, grandmother, and seven aunts.
'The Color Purple' and 'The Cosby Show' have been an inspiration for Franklin.
Did you know? La'Myia Janae Good-Bellinger, a popular American actress and singer, used to be Franklin's sister-in-law.
Main image credit: fitzcrittle /Shutterstock