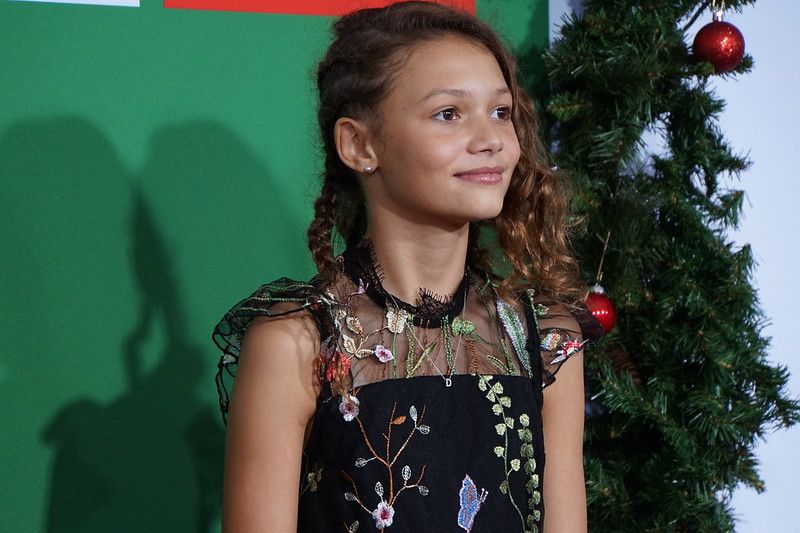 Didi Costine is an actress who was born on August 17, 2005, in College Station, Texas, United States.
She was born to famous actors Laura and Dustan Costine. They raised her and her two performing siblings, Isabela Costine and Francisco Costine.
Didi Costine is a significant member of the entertainment industry and a well-known celebrity today. She started her career as a child actor and gradually made her name in the industry. In her feature debut film, 'The Prince', she played the role of Bruce Willis' daughter.
New Orleans Children's Hospital, McDonald's, and Blue Cross/Blue Shield hired her to act in their advertisements. She has earned fame for her contributions to the films 'Daddy's Home' and 'Daddy's Home 2' as Mark Wahlberg's stepdaughter, alongside Will Ferrell and Linda Cardellini. She also appeared in the 2016 film 'The Hollars'.

What is Didi Costine’s net worth?

Didi Costine is a 16-year-old American actress with a net worth between $100,000 and $1 million. Didi Costine makes the majority of her money from her successful career as an actress.

How much does Didi Costine earn per year?

Didi Costine earns around $10,000 and $15,000 per movie. Throughout her entire career, she has starred in a huge variety of movies. The primary source of her income is from acting.

How tall is Didi Costine?

How old Is Didi Costine?

Adriana Didi Costine is the eldest child born to actor parents, Laura Costine and Dustan Costine, in College Station, Texas, on August 17, 2005. Her father is from Texas, while her mother is from the Dominican Republic. Didi was raised in Texas alongside her siblings Isabela and Francisco Costine. Her name at birth was Adriana Costine. Leo is her zodiac sign. Currently, she resides in Los Angeles, California. Not much is known about Didi Costine's early life.

The child actor, Didi Costine, is not currently involved in any type of relationship outside her family and friends. Her best friend, Owen Vaccaro, shares a great bond with her. The duo travels to a variety of locations together. So far, she has been preoccupied with her career.

Didi Costine has been an active part of the entertainment industry for a long time. Didi Costine is a well-known American actress who was born on August 17, 2005. She started her early life as an 'Atrian Child' on 'Star Crossed', the CW’s American drama series, in the year 2014. Her actress parents, Dustan and Laura Costine, raised her and her actor siblings, Isabela Costine, and Francisco Costine.
Didi Costine is a child actress famous for playing the stepdaughter of Mark Wahlberg's character in the films 'Daddy's Home' and 'Daddy's Home 2'. Didi Costine rose to prominence after starring Rachel in Jason Patric's action-thriller 'The Prince', which was released on August 22, 2014. Didi Costine was also in the 2014 picture 'The Prince' and the 2016 film 'The Hollars'.
Didi Costine started making money from her acting career as a child actress, which added to her net worth. She played Adrianna in the continuation of 'Daddy's Home' in 2017 and has been working in the first segment of this film since then. Didi Costine merely appeared in the 2018 show film 'Blaze' as the Flower Vendor's Daughter in a minor role. She also appeared in the 2018 TV Series 'The Affair' and the 2022 Mini TV Series 'The Thing About Pam'.
Didi Costine has demonstrated that there is no predetermined age for beginning an acting career after appearing in major motion pictures. Costine and her family today live a life of luxury and fortune. Didi Costine's father, Dustan Costine, was an actor, and she was born into a family of actors. Aside from that, she'll be featured in the advertisements for McDonald's and Orleans Children's Hospital. Dustan Costine, Costine's father, is an actor and casting director who has worked on films such as 'G.I. Joe: Retaliation' (2013), 'Oldboy' (2013), and 'The Campaign' (2012).

Didi Costine enjoys traveling with her friends and family to new areas. She enjoys stilt-strolling, vaulting, and hopping on her trampoline when she is not acting.