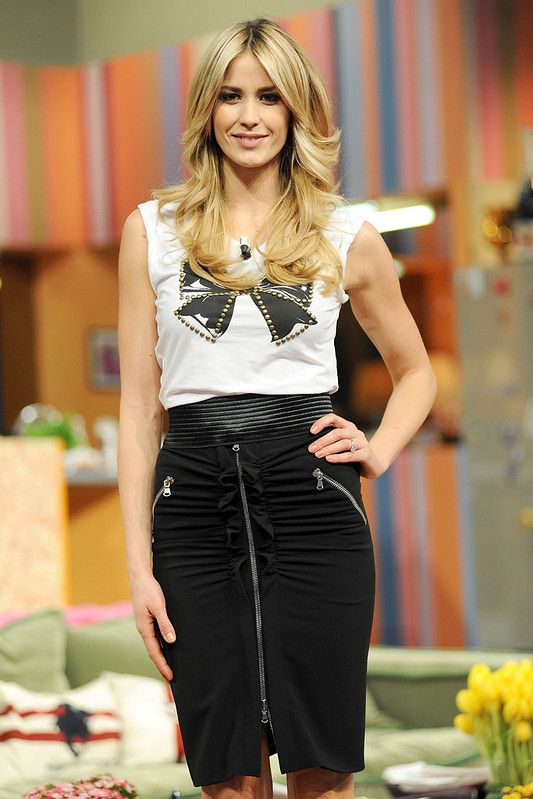 Born on August 18, 1981, Elena Santarelli is an Italian elite model and actress best known for participating in the 2005 Miss Universe pageant.

She is a well-known face around Italy, particularly on television.

Elena has an energetic, outgoing, and upbeat personality. Her modeling career started when an agent spotted her while working at a post office. Elena worked closely with the agency Models 1, based in Milan, Italy, from then on. In 2005 Elena participated in the Miss Italy pageant.

What is Elena Santarelli's net worth?

Elena Santarelli's net worth is $5 million.

How much does Elena Santarelli earn per year?

Details on the annual income of Elena Santarelli are unavailable.

How tall is Elena Santarelli?

How old is Elena Santarelli?

Elena was born in August 1981 in Latina, Italy, and studied there through university. Her Chinese zodiac sign is Rooster.

Who is Elena Santarelli's partner?

Bernardo Corradi is the husband of Elena Santarelli. They both married in 2014.

Her career highlights include being a face of L'Oreal in 2005, being chosen as an elite model for Gianfranco Ferré, appearing on covers of the leading fashion magazines in Italy (Vogue, Elle, and Glamour), representing Parisian brand Hermes and posing for many other brands including Dolce & Gabbana, Desigual, and Gap.

Elena is also very active in the world of cinema. She is known for the series 'Don Matteo,' where she played Elisa Leonardi. She is also a favorite of the Italian TV show ‘Dancing Italy.’

Elena supports the Cancer Support Association by donating her time and photographs to raise funds. She has also participated in several charity events, such as the Maratone, on behalf of UNICEF. As she is a very active person, Santarelli has constantly shown her interest in working in the favorable circumstances of her home country Italy.

What awards has Elena Santarelli won?

In Italy, her campaign for Hermes won her the 2006 Woman Of The Year Award from Glamour magazine.

When she is not modeling or filming, Elena enjoys spending time with her husband and friends, going to the beach, skiing, and riding horses. She also loves learning new languages, playing tennis, and spending time with her pets, including dogs and cats. She likes traveling, swimming, and horse riding. She enjoys cooking and is very interested in fashion, especially accessories. Her favorite reading material is related to fashion and history.