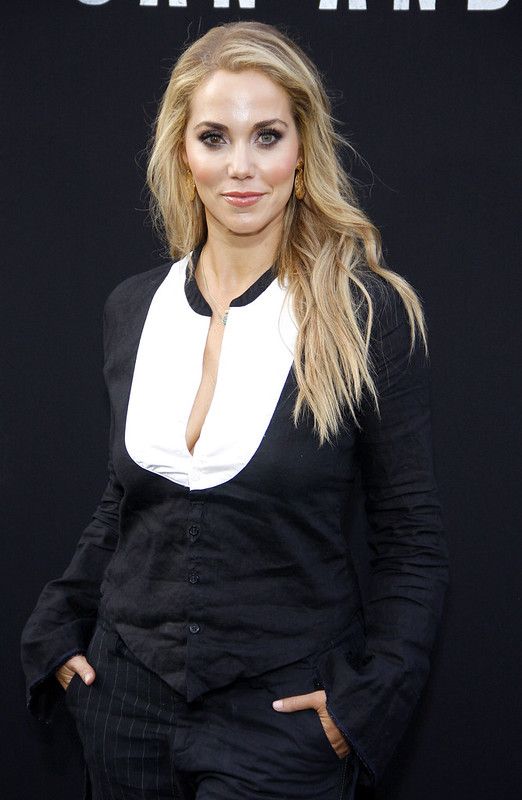 Elizabeth Berkley was born in the Farmington Hills of Oakland Country.
She practiced dancing at an early age and appeared in some musicals. She graduated from Farmington High School, situated in her locality.
Elizabeth is most known for her appearances in the films' Showgirl', 'Hurlyburly,' and 'Saved by the Bell,' and her other notable roles in television series and programs such as 'CSI: Miami' and 'Step It Up and Dance.'

What is Elizabeth Berkley's net worth?

How much does Elizabeth Berkley earn per year?

Elizabeth Berkley has yet to disclose her annual earnings.

How tall is Elizabeth Berkley?

How old is Elizabeth Berkley?

The American actress Elizabeth Berkley was born on July 28, 1974.
Elizabeth was born to her parents; Jere was her mother, a gift basket business owner, and Fred Berkley was her father, a lawyer. She spent most of her childhood in Oakland, Michigan.
She attended Cranbrook Kingswood School, a private school located in Bloomfield Hills. She graduated from North Farmington High School, located in Farmington Hills, in 1990.
Elizabeth was interested in dancing from an early age. She began to practice in the basement of her house, in a room that was arranged by her parents. Elizabeth also auditioned for the lead role in the musical comedy-drama film 'Annie.' Wanting to pursue her dancing career professionally, she moved to New York so that she could train with dancers and choreographers. Her dedication made her appear in several musicals in 1983 and perform in many ballets, namely 'Swan Lake.' She was also a teenage model for Elite Model Management.

Who is Elizabeth Berkley's partner?

Elizabeth Berkley is married to Greg Lauren, or Gregory David Lauren, who is an American actor, painter, and fashion designer.
Greg and Elizabeth met in 2000 at a dance class. They married three years later, on November 1, 2003, at the Esperanza Hotel.
They have a child together, Sky Cole Lauren, born on July 20, 2012, in Los Angeles.

Elizabeth Berkley began her acting career with an appearance in the film 'Frog' in 1987.
She auditioned for the television series 'Saved by the Bell' in 1989 when she was 15 years old. From 1989-1993, she played the character of Jessie Spano.
In the pursuit of a film career, Berkley left the role of Jessie Spano and won the role of Nomi Malone in the film 'Showgirls' in 1995. However, this film became a box office bomb as it faced a high amount of criticism and controversy on other media platforms, such as from Todd McCarthy in Variety and Janet Maslin of The New York Times. These negative reviews and comments made it difficult for her to find new places to work.
Her agent, Mike Menchel, also dropped her. Berkley would find her next representation cast as the title role in the anime film 'Armitage III: Poly Matrix.' She also worked in small and supporting roles in the films 'The First Wives Club,' 'The Real Blonde,' 'The Taxman,' 'Tail Lights Fade,' and 'Any Given Sunday.' In 1999, she appeared on stage in the London stage version of ‘Lenny.’
Elizabeth Berkley continued to be cast in films like 'The Curse of the Jade Scorpion' (2001), 'Roger Dodger' (2002), and 'Moving Malcolm' (2003). She made her Broadway debut in 'Sly Fox,' a comedy play by Larry Gelbart, in February 2004, shortly after her marriage. In 2005, she appeared in 'Hurlyburly' as Bonnie, a role which received mentionable praise in contrast to the past criticism of 'Showgirls.' A past critic of hers, Charles Isherwood of The New York Times, went as far as to apologize to her and praise her growth with open arms in his writing.
She guest-starred in series such as 'CSI: Miami,' 'NYPD Blue,' 'Without a Trace,' and 'Law & Order: Criminal Intent.' She starred in the Lifetime television film' Student Seduction', followed by 'Black Widow' in 2007. She also starred in a DVD film called 'Meet Market' in 2008; and signed on to appear in a multi-episode of 'CSI: Miami' and in the show's season six finale. All of the episodes starring Elizabeth Berkley were highly rated and ranked in the top ten on the Nielsen rating chart.
Elizabeth Berkley hosted 'Step It Up & Dance' which premiered in April of 2008 on Bravo and performed well, contributing to Bravo's highest-rated April ever. During the press tour of this ('Step It Up & Dance') reality series, she appeared on several morning news programs, such as ABC's 'Jimmy Kimmel Live!', 'The View,' Fuse TV's 'The Sauce,' E! 's 'Chelsea Lately,' and CNBC's 'The Big Idea with Donny Deutsch.' Elizabeth starred in the David Arquette-directed short film 'The Butler's in Love,' and it premiered in Los Angeles at Mann's Chinese Theater in June 2008. In 2009, Berkley starred in the sixth and final season of the Showtime series 'The L Word.' She appeared as Trudy in the film 'S. Darko', and as Tracy in 2009's comedy film 'Women In Trouble.' In June 2009, Elizabeth Berkley appeared on ‘Late Night with Jimmy Fallon.’
In 2010, Elizabeth Berkley set up a online self-help program for teen girls called 'Ask Elizabeth.' The website was created as a result of a joke between Elizabeth Berkley and Greg Lauren. 'Ask Elizabeth' was also the title of the reality series produced by MTV, which featured Berkley going around the United States and focusing on the issues of teenage girls. The idea and effort of this show were appreciated by the then vice president of development in MTV's News and Documentaries division, Amy Bailey, and was expected to premiere originally in late 2008 but never got off the ground, thus making the status of the show unknown. In 2011, Elizabeth Berkley published 'Ask Elizabeth', a self-help book for teenage girls, which was drawn from the workshops conducted for the program of the same name. In the same year, she starred in the movie 'Lucky Christmas,' where she played the lead female role of a woman who won a lottery and had to recover the ticket from the glove compartment of her stolen car. The movie premiered on the Hallmark channel on November 12, 2011.
Elizabeth Berkley will star in the new 'Saved By The Bell' reboot on NBC, which was aired after November 25, 2020.

Elizabeth Berkley is often seen to be an animal activist.
The actress is an active member of People for the Ethical Treatment of Animals (PETA). Elizabeth also encourages her fans to adapt to a vegetarian lifestyle.

What awards has Elizabeth Berkley won?