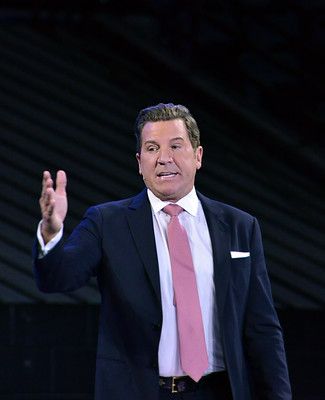 Eric Thomas Bolling, also known as 'The Admiral', was born in the city of Chicago, Illinois on March 2, 1963.

Thomas is an American television personality, conservative political and financial commentator, journalist, author, and actor. He is known for sharing critical opinions, such as when he remarked 'Guess who's coming to dinner?' when President Barack Obama decided to meet with Gabon's president, Ali Bongo Ondimba, in the White House.

Before leaving in May 2017, Eric Bolling hosted 'Cashin' In' on the Fox Business Channel, 'The Five' on the Fox News Channel, and 'Fox News specialist'. He is a vocal Donald Trump fan. He's also written two books, 'Wake Up America' and 'The Swamp'.

Eric Bolling, the television personality, worked as a commodities trader on Wall Street for five years before pursuing a career in television and was also a board member of NYMEX.

Eric was born to a Swedish father, Јоhn Gustav Вolling, and an Italian mother, Marie Hildegarde (Catino). Eric's father was a traveling salesman, and his mother worked as a vendor dealing with female products. Eric had two sisters, one of whom died of cancer when he was a child, and his mother died of the same condition years later. Andra P Spalding, his sister, is currently a minister. He is a committed Roman Catholic but has made an effort to remain unaffected by his commitment in relation to his work.

What is Eric Bolling’s net worth?

Eric's net worth is estimated to be $ 20 million.

How much does Eric Bolling earn per year?

How tall is Eric Bolling?

How old is Eric Bolling?

Eric was born and raised in Chicago, Illinois, United States, where he grew up along with his sister, Ѕandra P Spalding. He completed his elementary schooling at Queen of All Saints Basilica Ѕchool and went to high school at Loyola Academy, Chicago. He graduated with a BA in Economics from Rollins College located in Winter Park, Florida, in 1984.

After that, he pursued a fellowship at Duke University's School of Public Policy for his further studies. Eric was a member of the baseball team at Rollins College, and despite not being particularly good in the classroom, he was an excellent baseball player. In 1984, he was chosen by the Pittsburgh Pirates and played a few years in the minor levels before having to retire due to a damaged rotator cuff.

Who is Eric Bolling’s partner?

Bolling has been married for the last 25 years. On October 4, 1997, he married Adrienne Bolling (née Leventhal). The two met in college and married on October 4, 1997, in a small private ceremony. Their only child, Eric Chase, was born the next year.

Eric won several major accolades during his career as a trader, including the Maybach Man of the Year Award in 2007. He was also selected in Trader Monthly's Top 100 Traders in 2005 and 2006.

Eric was offered a job at CBS to work on the new show 'Fast Money', which debuted in 2006 and had Eric as the first host. However, he only stayed for a year before joining the Fox News Channel.

Eric was named chairman and president of JanOne Inc, a Nasdaq-listed business that is creating cures for pain-causing diseases.

What awards has Eric Bolling won?

He earned a fellowship at Duke University's School of Public Policy after graduating from Rollins College in Winter Park, Florida. He was also a former super-trader in oil and commodities, was named to Trader Monthly's Top 100 in 2005 and 2006, and was also awarded Man of the Year in 2007.

Eric was nominated for an Emmy Award for Best Commentator in 2020. 'Wake Up America', a New York Times bestseller, was also written by him.

Eric is fascinated by the financial market. He is a basketball lover as well. He also enjoys writing and reading and has published two novels.