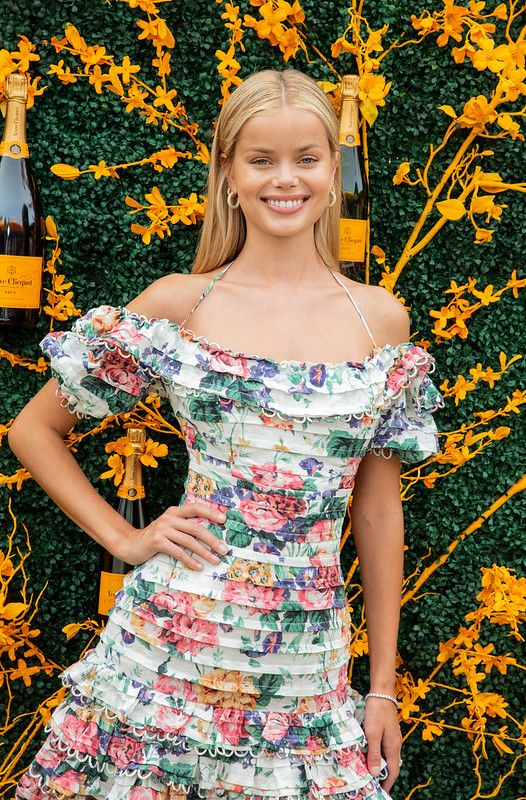 From an amateur equestrian to a celebrity model, the journey of Frida Aasen has been amazing and full of glamor so far.
Frida's modeling career began when she got noticed in a shopping mall by fashion and model agent Donna Leonna. At the time, Frida was just 14 years old.
Soon, Frida Aasen rose to fame and began doing modeling shoots for world-famous luxurious brands. She walked the runways of luxe brands including Louis Vuitton, Prada, Fendi, Madame Figaro, Just Cavalli, DKNY, Salvatore Ferragamo, Anna Sui, Tory Burch, Nasty Gal, and so many more. Her style show debut was with clothing, sports, and cosmetics brands including Marie Claire, Saks Fifth Avenue, H&M, Tory Burch, Louis Vuitton, and many more.
In the year 2012, Frida Aasen got featured in the 'CR Fashion Book', which was the first edition published by Carine Roitfeld. In 2013, she got featured in 'Vogue' as a face to watch alongside popular models Kelly Gale and Martha Hunt. Also, in the year 2012, Frida Aasen made her first-ever television appearance on a comic chat show called 'Fashion Police'. In 2017 and 2018, she walked on the runway of the Victoria's Secret fashion show and got a lot of attention from the paparazzi.
The Victoria's Secret model, Frida has been featured in the world's best fashion and beauty magazines multiple times. She has been featured in popular magazines including 'Vogue' and 'ELLE'. Frida also got featured on the covers of magazines 'Confused' and 'Dazed'.
Apart from being a celebrity model, Frida is also a social media sensation, and particularly, an Instagram star. Her verified Instagram account has about 932,000 followers as of 2022. Frida became trending when in 2019, she began dating an Italian businessman Tommy Chiabra. She announced over social media to her fans about her engagement in 2022.

What is Frida Aasen’s net worth?

According to various resources as of 2022, the net worth of Norway-based fashion model Frida Aasen is estimated to be around $3 million.

How much does Frida Aasen earn per year?

Although her net worth is expected to be around $3 million, at present, no information is available regarding the annual earnings of Frida Aasen. Her net worth is generated from her modeling career, and being a social media influencer.

How tall is Frida Aasen?

How old is Frida Aasen?

Originally from Norway, Frida Aasen was born in Kristiansand. The identity of her parents has not been revealed by the fashion model, but she has a younger sister Amalie Aasen. Nothing much is known about her childhood days and personal life. However, she is very bold and open about her professional life.
Although many resources say that Frida is well-educated, no information has been revealed regarding her educational background or qualifications.

Who is Frida Aasen’s partner?

The Victoria's Secret model Frida Aasen is currently dating a businessman from Italy, Tommy Chiabra. The couple began dating in the year 2019, and have announced over social media that they were getting officially engaged in 2022.
Tommy Chiabra is the CEO of the company Royal Yacht International.

Best known as a runway model from Norway, Frida Aasen is well-recognized as a fashion model, who got featured in several fashion magazines including the 'CR Fashion Book'. She is also popular for her photoshoots with top-notch fashion magazines including 'Elle', 'Vogue', 'Marie Claire', and many more.
Frida Aasen is also popular for having appeared in world-famous fashion shows including the shows held in New York City, Milan, and Paris. She is best recognized for having walked the runways of Victoria's Secret fashion shows in the years 2017 and 18.
She has done modeling shoots for luxurious brands including Marie Claire, Madame Figaro, Prada, Fendi, and so many others. She has walked on the runways for popular brands including Saks Fifth Avenue, Bluemarine, Derek Lam, DKNY, Carolina Herrera, Jeremy Scott, and more.

What awards has Frida Aasen won?

In the year 2014, Frida Aasen became the 'Breakthrough Model of the Year' and won the ELLE Style Awards. So far, in her modeling career, Frida has been featured in world-famous fashion and beauty magazines including 'Vogue'.
Before rising to fame, Frida has won multiple ribbons in horse-riding competitions.

Apart from her interests in fashion and modeling, her hobby and special talent is horseback riding. Before rising to stardom, Frida Aasen was an amateur Equestrian and won many ribbons in horseback riding competitions. She still loves horse riding.
Other hobbies of Frida include surfing, voyaging, swimming, photography, traveling, and cooking French and Italian dishes.