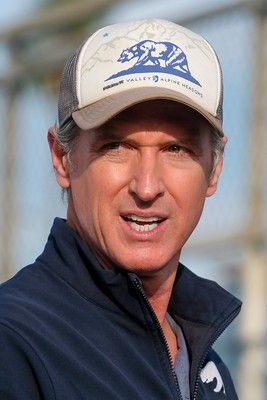 Newsom was a dyslexic child and had an uneasy childhood. He completed his graduation at Santa Clara University with a Bachelor of Science in Political Science.

Newsom worked at several jobs to financially support his family. After his graduation, he founded the PlumpJack wine store with the financial help of a family friend, Gordon Getty. The business expanded to various verticals including hotels, wineries, and restaurants. The company, PlumpJack Group, expanded to have 23 businesses under it. Newsom left ownership of some of the businesses and started his political journey.

In 1996, he was appointed to the vacant seat on the Parking and Traffic Commission by Mayor Willie Brown. He was also elected as a member of the Board of Supervisors. In 2003, Newsom became the 42nd Mayor of San Francisco. In 2010, Newsom was elected as the lieutenant governor of California and got re-elected in 2014.

What is Gavin Newsom’s net worth?

How much does Gavin Newsom earn per year?

Gavin Newsom was paid an estimated salary of $210,000 in 2020, as Governor of California. Gavin Newsom is said to be the highest-paid US Senator. Newsom also earns an estimate of $251,000 per year from his business interests.

How tall is Gavin Newsom?

How old is Gavin Newsom?

Gavin Newsom was born on October 10, 1967, in San Francisco. His full family name is Gavin Christopher Newsom. He is the son of Tessa Thomas and William Alfred Newsom III. His mother, Tessa, used to work three jobs to provide basic needs to Gavin and his sister, Hilary Newsom Callan. His father, William, was a state appeals court judge and attorney for Getty Oil.

Newsom was a dyslexic child. He went to a French American bilingual school, Ecole Notre Dame Des Victoires in San Francisco for kindergarten and first grade. After two years, he got transferred to remedial reading classes. He went to Redwood High School for his graduation and completed his studies in 1985. He used to play as an outfielder in baseball games and shooting guard in basketball. He performed very well in these games and as a result, appeared on the cover photo of 'The Marin Independent Journal'. During high school, he worked several jobs to financially support his family.

Newsom went to Santa Clara University with a baseball scholarship and used to live in the Alameda Apartments. He graduated in 1989 with a Bachelor of Science in Political Science.

To cope up with his dyslexia, Newsom relied on audio books, digests, and informal verbal instructions. Even today, he prefers to listen to a document, rather than read it.

Who is Gavin Newsom’s partner?

Newsom married Kimberly Gullfoyle in December 2001. Kimberly Gullfoyle was a former legal commentator for CNN, Court TV, and MSNBC, and a San Francisco prosecutor. The couple got married at the Saint Ignatius Catholic Church. However, they filed for divorce as their careers were poles apart and didn't allow them to be together. Their divorce was finalized on February 28, 2006.

Newsom was having a relationship with the wife of Alex Tourk, Ruby Rippey Tourk. Alex Tourk divorced his wife shortly after the news of their affair spread and also left Newsom's campaign and administration as Deputy Chief of Staff.

In 2006, Newsom started dating Jennifer Siebel, a film director, and announced their engagement in December 2007. The couple got married in July 2008 in Stevensville, Montana. The couple welcomed daughters, Brooklynn and Montana Tessa Newsom, and sons, Dutch and Hunter Siebel Newsom. In 2012, the couple moved to Kentfield in Marin County. Newsom moved to the California Governor's Mansion and settled in Fair Oaks after his term as Governor was over.

On May 14, 1991, Newsom founded PlumpJack Associates L.P. with the help of some investors. In the following year, Newsom and his investors also started the PlumpJack Winery with the help of his family friend, Gordon Getty. The company grew with over 700 employees and expanded its vertical and opened the PlumpJack Café in 1993, PlumpJack Squaw Valley Inn in 1994, a winery in Napa Valley and the Balboa Café Bar and Grill in 1995,  the MatrixFillmore Bar in 1998, the PlumpJack Development Fund L.P. in 1996, PlumpJackSport retail clothing stores, PlumpJack Wines shop Noe Valley branch in 1999, and a second Balboa Café at Squaw Valley in 2000. By 2002, his business was valued at more than $6.9 million.

Newsom became Mayor in 2004 by volunteering for Willie Brown's campaign in 1995 and sold all his businesses in San Francisco. However, he remained the owner of his businesses outside San Francisco. He also remains the president of the absentia of Airelle Wines Inc., interrelated to the PlumpJack Winery in Napa County. In 1996, Newsom was appointed to the vacant seat on the Parking and Traffic Commission. Later, he was elected as the president of the commission. In 1997, he was appointed to the San Francisco Board of Supervisors.

In the 2003 elections, Newsom was campaigned by the National figures from the Democratic Party. Newsom won by 11,000 votes, securing 53%, while Matt Gonzalez, his opposition, secured 47%. In 2007, nobody stood in the opposition to Newsom. The deadline passed on August 10, 2007, and it was decided that Newsom would continue with his second tenure as Mayor. However, in the elections, 13 candidates challenged Newsom.

On November 6, 2007, he won his re-election with over 72% of the vote and promised to focus on the environment, homelessness, health care, education, housing, and rebuilding of San Francisco General Hospital. In 2004, he gained national attention as he legalized same-sex marriage, which violated the state law passed in 2000.

In the 2010 elections, he ran for the Governor of California. Newsom had low poll numbers and dropped out in 2009. Newsom ran for Lieutenant Governor in 2010. He won the elections on November 2, 2010, and was sworn in on January 10, 2011. He defeated Republican, Ron Nehring, and was re-elected as Lieutenant Governor of California on November 4, 2014. Newsom then legalized cannabis use and cultivation for state residents above 21 years.

On February 7, 2013, Newsom's first book, 'Citizenville: How to Take the Town Square Digital and Reinvent Government', was published. In 2016, Newsom launched Digital Democracy, an online tool that makes use of facial and voice recognition to allow its users to navigate California legislative proceedings, by partnering with the Institute for Advanced Technology and Public Policy at California Polytechnic State University. In the 2018 elections, he was the elected Governor of California and won on November 6, defeating John H. Cox.

Newsom has hosted many fundraisers in his political career. Care Not Cash is a voter initiative Newsom supported, which offers supportive housing, care, drug treatment, and help from behavioral health specialists for the homeless.

What awards has Gavin Newsom won?

Newsom was awarded the Leadership for Healthy Communities Award in 2009.