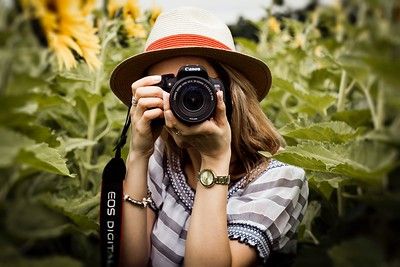 She was born in Kassel in 1949. She came to be a part of the Getty family by marrying John Paul Getty III.

She became famous, along with Jutta Winkelmann, her sister, and they came to be known as the Getty Twins. Gisela Getty became known for her directorial works 'Heinrich Viel', 'Tim Leary: The Artwork Of Dying', 'Schneeweißrosenrot', and more. The two sisters are known in their country as the celebrity representatives of the West German Student Movement or the '68 movement, and they became famous during the hippie era of the '70s. The two sisters dined, danced, and hung out with legendary celebrities and artists of that era. They became famous for being extraordinary journalists and photographing everything around the artists. They mixed with all sorts of people, from high-end celebrities to street robbers, and they captured and represented West Berlin's atmosphere of rejection perfectly. They then worked to become filmmakers in Berlin and succeeded in that as well. The twins then went to Italy and set up a bohemian community. Since the prime time of her career, Gisela has produced several documentaries, films, journalist reports, books, and internationally famous photographs about the flower-power era. As of the 2020s, she has stepped down from her work and has been working in Munich as a photographer.

What is Gisela Getty’s net worth?

Gisela Getty has earned a good amount of wealth from her successful career as a film director, photographer, author, and journalist. Getty has accumulated a whopping net worth of about $20 million.

How much does Gisela Getty earn per year?

Gisela Getty's earnings depend on when she decides to release her work to the public and the level of popularity the work reaches. Hence, it's difficult to know how much she earns every year.

How tall is Gisela Getty?

How old is Gisela Getty?

Gisela Getty was born in Kassel, Hesse, Central Germany in 1949 as Gisela Martine Schmidt. Her mother was Ruth Winzenburg, a teacher who taught at the agricultural college but later quit working to spend more time with her family. Her father was Julius Schmidt, a military historian, and a writer. She had only one sister, Jutta Winkelmann, who not only grew up with her but also became famous alongside her. They both attended the Waldorf School, located in Kassel. After graduating from high school, they enrolled at the Kassel Arts Academy, where they studied film, graphic arts, photography, and fashion for four years, from 1966-1970.

When they were still at the academy, she and Jutta Winkelmann started working in Kassel. They started doing political films, but their life still felt bourgeois to them, so they left the academy a few months before their final exam and became political activists. Gisela Getty left for Berlin to go to a factory where she wanted to agitate the working class.

Who is Gisela Getty's partner?

Gisela Getty got married for the first time in 1971 to Gerhard Büttenbender, her fellow filmmaker. However, their relationship didn't last and the couple divorced in 1972. She then fell in love with Rolf Zacher, an actor, and the two married in 1972. The two had a daughter together named Anna Getty in October 1972. The couple fell out and divorced in 1973. Their daughter followed the careers of her parents and she became a filmmaker when she grew up.

Gisela became famous when she started dating a member of the Getty family, the American tycoon, John Paul Getty III. She became known to people when John Paul Getty III was kidnapped for a large ransom. They got him back quickly and the couple married on September 12, 1974. The two even had a son, Balthazar Getty, who grew up to follow in the same industry and became an actor. Gisela Getty and John Paul Getty III started strongly, but the kidnapping changed their relationship, so they separated and moved to Munich in 1981. Their divorce was finalized in 1993.

Gisela Getty and Jutta Winkelmann started their careers when they came together with Gerhard Büttenbender and Adolf Winkelmann to establish the Kassel Film Collective in 1968. Next year, their movie, 'Heinrich Viel', won the first prize at the Oberhausen International Short Film Festival. They filmed the 31-minute movie in a Baunatal Volkswagen factory and it revolves around the work of a production line worker.

Gisela Getty first became known to the public during the 1968 student protests. She became quite active for some years after that, taking part in demonstrations in West Berlin and in Kassel. When they were already working together at the Kassel Film Collective, Gisela Getty married Gerhard Büttenbender. However, that marriage ended quickly, so she relocated to Berlin with her sister. She later said many times that they moved in search of revolution.

They made new friends with Rainer Langhans, the hippie mentor, and Rolf Zacher, the actor, as they moved along to Rome. Around that same time, she decided to marry Rolf Zacher. Gisela Getty was living a life full of independence in Rome but when her daughter, Anna, was born, she realized that her life was unsuitable for raising a child. She sent Anna to live in Kassel under the care of her family. Gisela Zacher, as she was known then, and Rolf Zacher got divorced a very short time after that.

While still in Rome, she and her sister met John Paul Getty III of the famous Getty family, who was still a teenager. He was expelled from his international school the year before after he experienced the death of his stepmother. As soon as he and the twin sisters became friends, they became inseparable. The three of them even got an apartment and started living there.

John Paul Getty III was then involved in a widely publicized case where he was kidnapped and after the incident, the authorities in Rome started to suspect the twin sisters. The kidnapping took place in July 1973, and by then, he and Gisela Getty were very much in love. Once he was released by the kidnappers, he and Gisela decided to marry quite quickly in 1974. They also had a son by the end of January 1975, named Balthazar Getty.

By the time their son was born, the couple had returned to America and lived in many places, including San Francisco and Los Angeles. The twin sisters had already gained much popularity from the 1968 protest, and the tragic kidnapping incident of 1973 made them even more famous. By the time they came back to America, they were already a part of a social network of celebrities, which included huge names like Federico Fellini, Bob Dylan, Dennis Hopper, Carlo Ponti, Leonard Cohen, and more.

The twin sisters first met Bob Dylan in 1966 during his European tour, and as they recounted the meet, they said that a connection sparked between them. Jutta teamed up with Brigitte Streubel, the photo model, Anna Werner, the photographer, and Rainer Langhans, former communard and filmmaker, in Munich, to form a new self-discovery, spiritually-oriented commune. Christa Ritter, the journalist and filmmaker, joined them in 1978, and Gisela Getty joined them in 1991. The group caught the attention of the media over the years. There was some squabble among the members of the group when Gisela joined and brought in fame, illustrious contacts, and money along with her. It posed some issues to the group dynamics, but they went away after some time.

Gisela, Jutta, and John came back from Rome, but the trauma of the kidnapping case was still haunting them. Gisela Getty and John Paul Getty III were living separately in California from her sister. However, Gisela Getty was still living the lifestyle of a 'wild child' and started becoming distant from her husband. Finally, she decided to take her children away to live with her in San Francisco, where she became involved and started writing plays for the Magic Theatre Company professionally. She and John Paul Getty III separated in 1980, and she returned to live in Munich, but the two remained friends long after.

Around 1992-1993, the twin sisters were spending a good amount of time with the American writer and psychologist, Timothy Leary and Aileen Getty, his partner, to prepare for their documentary. Aileen was also the sister of Gisela Getty's husband. After working on the production of a documentary, they released 'Death Becomes Him Well' or 'Der Tod Steht Ihnen Gut' in 1994. Critics didn't respond positively to the documentary and were not impressed when they saw that the movie did not present the long-standing relationship they had with the twin sisters but rather showed it as a normal documentary on television. Additionally, even though the movie was mainly released through a few ambiguous television channels in Germany, it has still been largely overlooked by the public. Even with every setback, the movie won the bronze medal at The New Yorker Festival in 1995 in the History and Society category.

Gisela Getty's fame reduced a lot after she and John Paul Getty III divorced in 1993. However, she still pops up in the recollection of several reports owing to her young days and her literary works in recent times. She got together with her sister and Jamal Tuschick, the Kassel-born journalist and writer, and they published 'The Twins: On The Attempt To Embrace Mammon And Spirit' or 'Die Zwillinge Oder Vom Versuch, Geld Und Geist Zu Küssen' in 2008. The book reflects on the life of the twins, their part in the '68 movement, and their life in Rome, Berlin, and Kassel. The book is their autobiographical confessional work, but the majority of critics gave mixed reviews about the contents of the book. Gisella wrote her next book, 'Unter dem Cherrytree', in collaboration with her sister and Ingo Groepler-Roeser in 2013. This book also got some mixed reviews from critics.

Gisela Getty is best known to the world as a designer, writer, photographer, author, and film director born in Germany. She started gaining fame for taking part in the '68 movement with her sister. However, her fame reached its peak when she got married to John Paul Getty III from the famous Getty family. She and her sister became a part of the elite society of celebrities. They made several films and wrote several books that were acclaimed at times and criticized at times as well.

It's not known if Gisela Getty has ever been involved with any charity organizations. However, she has always used her fame to advocate for noble and charitable causes. For a period of time, she was a part of the Getty family which are the creators of the Getty Foundation. The foundation awards money or grants for the purpose of understanding and preserving art.

What awards has Gisela Getty won?

Gisela Getty's movie, 'Heinrich Viel', about an assembly line worker, won her the Grand Prix at Oberhausen in 1969 at the Westdeutscher Kurzfilmtage.

Her film or documentary with Tim Leary, 'Death Becomes Him Well' or 'Der Tod Steht Ihnen Gut', won the bronze medal at The New Yorker Festival in 1995 in the History and Society category.

Gisela Getty was a part of the circle of celebrities and she became a kind of socialite. She was a rebel from a young age who stood up for everything she believed in her heart. It's not known what other hobbies and interests she had or currently has except her passion for making films, writing books, and taking photos.

We would love your help! If you have a photo of Gisela Getty, either of them alone or a selfie that you would be happy to share, please send it to [email protected]. If you have knowledge or information that you think would help us improve this article, please contact us.