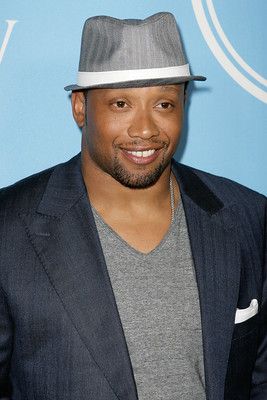 Jamal Anderson is a famous former American football player who played for the Atlanta Falcons in the National Football League (NFL).

Born on September 30, 1972, Jamal Anderson rose to fame when the Atlanta Falcons picked him in the 1994 NFL draft in the seventh round. Anderson remained with the Falcons and won numerous titles and awards for his game throughout his eight-year career.

Even though he was a promising football player and led his team to the Super Bowl, his career ended in 2001 when he suffered a severe knee injury. From then onwards, he started appearing as an analyst on sports channels like ESPN and CNN. Continue reading to learn more about the net worth, career, family, and personal life of the retired American football player Jamal Anderson.

What is Jamal Anderson's net worth?

Jamal Anderson's net worth is estimated to be $5 million. He built this net worth by playing for the Atlanta Falcons in the NFL and working as an analyst for several sports programs.

How much does Jamal Anderson earn per year?

Jamal Anderson is a famous football player and game analyst and has built a net worth of $5 million. However, the exact amount of his annual earnings has not been disclosed to the public.

How tall is Jamal Anderson?

How old is Jamal Anderson?

Jamal Sharif Anderson was born in Newark in New Jersey, USA, on September 30, 1972. His parents, Zenobia and James Anderson, enrolled him in El Camino Real Charter High School in California for his high school education. He was actively involved in football and was even named on the CIF Los Angeles City Section 4-A All-City first team. After graduating from this school, Jamal Anderson played college football at Moorpark College. Later, he transferred to the University of Utah and played on the college football team.

Who is Jamal Anderson's partner?

After playing for Moorpark College and the University of Utah, Jamal Anderson was selected by Atlanta Falcons in the NFL draft of 1994. In 1998, he led his team to the Super Bowl game. Anderson played for the Falcons for eight seasons and had an average score of 5,336 rushing yards (4879 m) and 41 touchdowns before he met with a severe knee injury that ended his career as a football player in 2001.

Following his exit from the Atlanta Falcons and NFL, Jamal Anderson started working as a game analyst with numerous sports channels. He first appeared as a sports analyst on ESPN/ABC, where he was often seen promoting the Mountain West Conference and his alma mater, the University of Utah.

In 2009, Jamal Anderson started featuring on 'Morency' broadcasted on Hardcore Sports Radio as a phone-in guest. After the show was terminated by Hardcore Sports Radio, Anderson became a weekly guest on 'Red Heat', another program broadcasted on the radio and hosted by Cam Stewart. In 2010, he joined 'CNN Newsroom' as a sports analyst, where he provided insights on NFL current issues and highlights from other major sports leagues.

What awards has Jamal Anderson won?

In his short career as a football player, Jamal Anderson's most notable achievements were being named in the Pro Bowl and First-team All-Pro, in 1998.