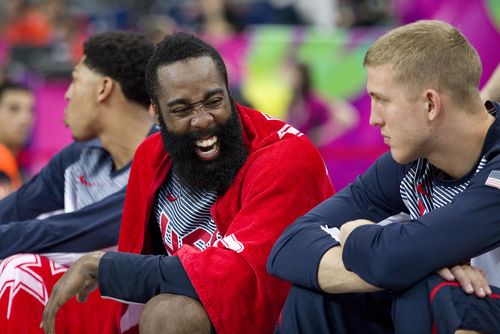 James Harden is an American NBA player.
He is one of the most popular basketball players that has set many records. Harden is also known by his nickname 'The Beard'.
Harden has been passionate about basketball since a very young age. He has played sports throughout his high school and college years. On a professional level, he has around 12 years of experience in the field. Harden is known for his position as a shooting guard in the league. He started his professional career with the Oklahoma City Thunder, then, he went on to join the Houston Rockets. Harden was part of the Brooklyn Nets, but in a trade-off, the Philadelphia 76ers claimed Harden. He is one of the top paid players on the team.
Harden has achieved success through his hard work. He is respected by his team members and other professionals involved in the sport. He is also known for supporting many notable causes. He considers Houston his home and finds many ways to improve the quality of life of people living there. He has also been an inspiration for many young players who have just started their professional careers as basketball players or are looking for an opportunity. Read on to explore more interesting facts about James Harden.

What is James Harden’s net worth?

It's no surprise that James Harden has accumulated a massive net worth through his career as a professional basketball player. He has also earned his net worth through various endorsement deals that he signed with well-known brands, one of which is Adidas. It also includes an estate worth $10 million in the Houston suburbs. His net worth is estimated to be around $165 million.

How much does James Harden earn per year?

Harden's salary changes according to his contract with a specific team and the NBA seasons he plays. The Brooklyn Nets paid a salary of $44.3 million for the 2021-2022 season.

How tall is James Harden?

As a professional NBA player, James Harden has an impressive height. He is 6 ft 5 in (196 cm) tall.

How old is James Harden?

James Harden's full name at the time of his birth was James Edward Harden Jr. He was brought up in a Christian household. He completed his high school graduation from Artesia High School in Lakewood, California. After that, Harden joined Arizona State University and played on their basketball team.

Who is James Harden dating?

Jessyka Jenshal is the girlfriend of James Harden. They were spotted together in 2017. Harden previously dated a few girls, including Malaysia Pargo, Tahiry Jose, Amber Rose, Brittany Renner, and Khloe Kardashian.

Who is James Harden's family?

James Harden's father is James Harden Sr. James does not share a close relationship with his father due to their differences. Monja Willis is the mother of James Harden. His mother suffered from several miscarriages before his birth.

James Harden started playing basketball from a very young age. He played basketball as part of the Arizona State Sun Devils. In 2009, Harden took part in the NBA draft and was signed by the Oklahoma City Thunder. His professional NBA career thus started with the Oklahoma City Thunder. For the 2011-2012 season of the NBA, James Harden greatly helped the Oklahoma City Thunder go on to the finals. However, they lost the season against the Miami Heat.
While Harden was offered an extension, he chose to instead sign with the Houston Rockets. His NBA career grew more, as did his popularity while he played with the Houston Rockets. He did extremely well in his first season with the team. In 2021, he was traded to the Brooklyn Nets and then to the Philadelphia 76ers. For each team, James Harden proved to be greatly helpful in aiding them win numerous matches.
Harden is also known for scoring 40 points against the Pheonix Suns while he was in a reserved role right after his start as a professional NBA player. He won against the Utah Jazz while scoring a career-high 56 points. This score was only a single point less than the 57-point record made by Calvin Murphy in 1978. Harden has also been a member of the United States national basketball team and has won medals at the 2014 FIBA World Cup and the 2012 Summer Olympics.

James Harden is an NBA player who believes in giving back to the community. His foundation, 'The Harden Way', strives to bridge economic and educational gaps in the Houston Metropolitan Area. Harden also donated $240,000 for the renovation of outdoor basketball courts destroyed by Hurricane Harvey in Houston.

What awards has James Harden won?

James Harden is known for his iconic beard. He is very passionate about growing his beard. Harden likes to ride ATVs. In addition to basketball, he is also interested in baseball and football. James Harden is an avid dog lover. He is also dedicated to fitness and living a healthy lifestyle.

James Harden started growing his iconic beard in 2009.
His beard is so popular that it has appeared on t-shirts and in several songs.
After becoming part of the Brooklyn Nets, Harden led the team to victory against the San Antonio Spurs, which was the first win for the Brooklyn Nets against this team in 19 years.
In the history of NBA, Harden's 2017 four-year extension contract is the second most expensive contract, which is about $171 million.
In his career as a basketball player, Harden has played 877 regular season matches.
Harden once appeared on the cover of the magazine 'Sports Illustrated' during his college career.
In spite of being a young player, Harden had made a record for having an impressively high success rate of three-pointers throughout his first season with the Oklahoma City Thunder.
Harden was selected for the first time for an All-Star team in the first season he played with the Houston Rockets.
Harden also has a great collection of expensive cars, although he mostly uses a Range Rover for work purposes.Harden was the third overall pick in the 2009 NBA draft.
He was monumental in helping Artesia earn the title of state champions during his years in high school.
While he has mostly played as a shooting guard, there were instances where Harden has also played from the point guard position.
In NBA history, Harden is considered to be the highest all-time left-handed scorer.
Two of the most notable offensive moves of Harden are the step-back jumper and the Euro step.
Harden was chosen as a 2016 Olympics candidate, however, he did not join the team.
Main image credit: Natursports/ shutterstock