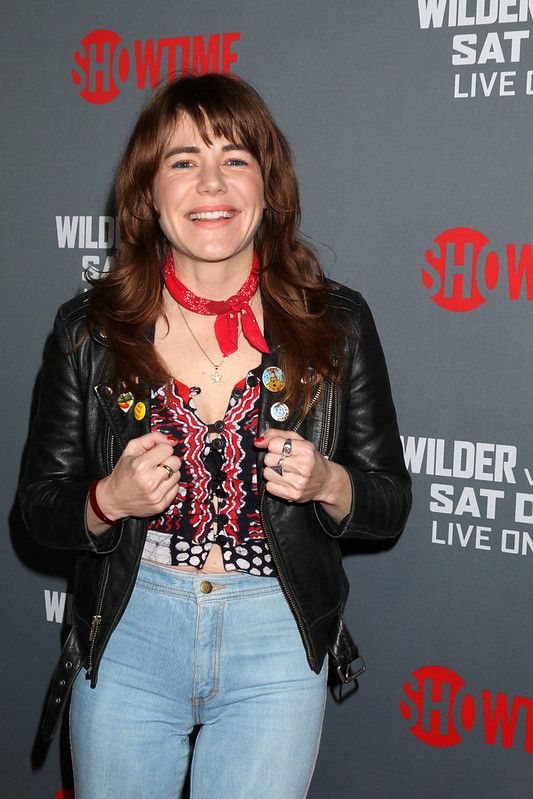 She is an American singer-songwriter, musician, and actress. She was the main singer, rhythm guitarist, and pianist for the indie music band Rilo Kiley.

Lewis rose to notoriety as a child actress in the '80s, playing in the films 'Troop Beverly Hills' and 'The Wizard', as well as the television series 'Brooklyn Bridge'. When the film was released, it was shown in a movie theater close to where Lewis' family was living at that time.

Lewis semi-retired from acting in the mid-'90s to focus on her musical career, forming Rilo Kiley in 1998. Before disbanding in 2014, Rilo Kiley released four albums.

Lewis has four solo albums to his credit: 'Rabbit Fur Coat', 'Acid Tongue', 'The Voyager', and 'On the Line'. Lewis has been a member of a number of groups in addition to Rilo Kiley and her solo work.

What is Jenny Lewis' net worth?

The net worth of Jenny Lewis is $6 million.

How much does Jenny Lewis earn per year?

Although the net worth of Jenny Lewis is known, There is no accurate information about her annual salary.

How tall is Jenny Lewis?

How old is Jenny Lewis?

Jenny Lewis was born in the Nevada city of Las Vegas. Linda Gordon, her mother, was a professional singer, and Eddie Gordon, her father, was a member of the Harmonica Gang. Jenny Lewis' mother died of Liver cancer. Apart from this, we do not know anything about her personal life.

Jenny Lewis now resides in Los Angeles' lush Laurel Canyon neighborhood. Her house was built in the '40s by a Disney animator, and it still has many of the original elements that the animator put on the property, such as hand-painted flowers on the walls, original flagstones, and a rose garden, and a koi pool.

Who is Jenny Lewis dating?

Jenny Lewis is in a relationship with Jonathan Rice.

Lewis made her professional debut in a commercial for 'Jell-O'. She went on to feature in ads for Mattel's Barbie and Baby Skates dolls, Toys R Us toy stores, the Black & Decker Popcorn Maker, and other products.

She appeared as one of Lucy's grandchildren in the short-lived 1986 Lucille Ball sitcom 'Life With Lucy'. She also appeared in 'Murder She Wrote', 'The New Twilight Zone', 'Baywatch', 'The Golden Girls', 'Growing Pains', 'Just the Ten of Us', 'Roseanne', 'Mr. Belvedere', and 'Brooklyn Bridge'. '

In 2008, she made a brief return to the film industry as the voice of the Assistant Director in Walt Disney Pictures' animated movie 'Bolt'. In 2013, Lewis created the music score for Tribeca Film's feature, 'Very Good Girls'. Lewis announced the band's breakup in 2014.

Conor Oberst persuaded Lewis to record a solo album for Team Love in 2004. 'Rabbit Fur Coat' (released January 24, 2006) is described by Lewis as a type of soul record. It features contributions from Oberst, M. Ward, and Maroon 5 guitarist James Valentine. Ben Gibbard from 'Death Cab for Cutie' appears on the cover of The Traveling Wilburys' 'Handle With Care'. Jenny Lewis is accompanied by the Watson Twins on the album.

Lewis and her boyfriend, musician Johnathan Rice, founded the duo Jenny and Johnny in 2010, and the two released an album titled 'I'm Having Fun Now' on Warner Bros. Records.

Lewis kicked up her tour The Voyager on July 8, 2014, at the Ottawa Bluesfest in Ontario, Canada. She toured the United States in July and released her album 'The Voyager' on July 29.

On July 15, 2014, GQ released the music video for 'Just One of the Guys', which stars Lewis, Kristen Stewart, Anne Hathaway, Brie Larson, and Tennessee Thomas. Her tour featured stops at the Newport Folk Festival, Lollapalooza, Outside Lands Music and Arts Festival, Red Rocks Amphitheatre, the 2014 iTunes Festival in London, and two stops at the Austin City Limits Music Festival and the Life Is Beautiful Festival in Las Vegas.

Jenny Lewis is still very much active in the entertainment industry, and she also loves to be on Hollywood sets.