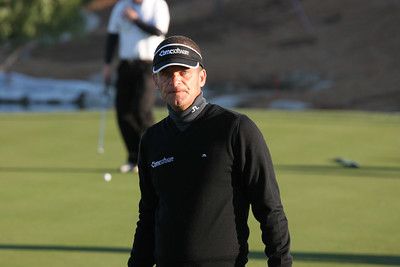 Jesper Parnevik is a famous Swedish professional golfer who ranked in the top 10 players in the Official World Golf Rankings for 38 weeks in 2000 and 2001.

Jesper Parnevik was born on March 7, 1965 Botkyrka Municipality, Sweden. He is the son of comedian Bosse Parnevik.

Born in Sweden, he moved to Florida at the age of 15 after being mesmerized by his family tour at Myrtle Beach. Jesper studied in Florida on a golf scholarship, and he later built a career of over 30 decades. Jesper Parnevik is one of the richest golfers in the world, winning numerous events at the European Tour, PGA Tour, and Champions Tour. He also won several titles like the Ryder Cup, Volvo Scandinavian Masters, and Honda Classic.

What is Jesper Parnevik's net worth?

As per records, Jesper Parnevik has acquired a net worth of around $25 million.

How much does Jesper Parnevik earn per year?

There is limited information about the exact yearly income earned by Jesper Parnevik.

How tall is Jesper Parnevik?

How old is Jesper Parnevik?

Jesper Parnevik is 57 years old as of 2022 and celebrates his birthday on March 7.

Jesper Bo Parnevik was born on March 7, 1965, to a Swedish family. Born in Botkyrka, Sweden, he is the son of the famous Swedish comedian Bosse Parnevik and his wife, Gerti Parnevik. He also has two other siblings named Jill Parnevik and Jessica Parnevik. The family of five lived a pretty peaceful and filling life back in Sweden.

At the age of 15, Jesper Parnevik moved to the United States to study at Palm Beach Junior College, Lake Worth, Florida. He studied there with a golf scholarship, only to make golf his profession.

Who is Jesper Parnevik’s partner?

The famous Swedish golfer is married to Mia Parnevik.

Jesper Parnevik is best known as a professional Swedish golfer who has won 15 tournaments, including the European Tour and PGA tour.

He kicked off his professional golf career in 1986 and won four tournaments on the European tour in 1988. In the mid-90s, he then moved back to Florida and participated in the PGA tour. He successfully won the Honda Classic in 2001. His best European tour win was the Volvo Scandinavian Masters in 1998.

Jasper Parnevik also appeared at three Ryder Cup events in 1997, 1999, and 2002. He also became the runner-up twice at The Open in 1994 and 1997. Jasper ranked as the world's seventh-best golf player in 2000 and maintained his rank until another Swedish golfer, Henrik Stenson, took over, ranking the world number five in 2007.

At the Valero Texas Open in 2007, Jasper finished second. In 2009, he had to cut short his PGA tour for his hip surgery. After a year of rest, when Jasper tried returning to the game in 2010 for the Northern Trust Open, he again had to cut it short for his injured back. He then returned to lay on the PGA Tour again in 2011 and also played the 2012 and 2013 PGA Tour on medical extension. After that, he suffered several injuries and returned in 2016, winning the Champions Tour at Insperity Invitational.

Apart from golf, Jasper Parnevik also tried his hands at acting. In 2007 he was seen playing his character in a comedy show titled 'Who's Your Caddy?' After them, Jasper and his family had a four-season reality TV show titled 'Parneviks' from 2015 to 2018.

Apart from picking up playing golf as a hobby and later a profession, Jesper Parnevik shows much interest in fashion.

He is known to have an eclectic fashion sense pulling off purple trousers and baseball caps. He loves to experiment with fun and quirky pieces, even on-field. He has a fascination with changing his clothes in between golf tournaments. The famous golf writer, Dan Jenkins, referred to Jesper Parnevik as 'the last guy to climb out of the clown car at the circus.' Jesper also loves spending time with his wife, Mia Parnevik, and his family.