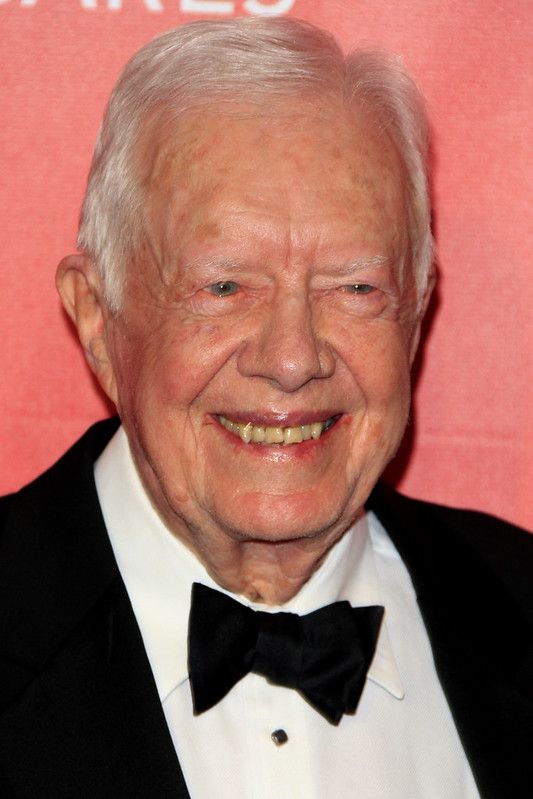 The former American politician Jimmy Carter, born as James Earl Carter Jr., governed well over the country as the 39th president from 1977-1981.

Jimmy Carter has continued to work on political and societal initiatives since leaving government and was honored in 2002 with the Nobel Peace Prize for his charitable missions. In 1946, Jimmy Carter, who was born and brought up in Plains, Georgia, received a degree of bachelor of science from the United States Naval Academy and enlisted in the American Navy, serving aboard several submarines.

Jimmy Carter left the United States Navy after the demise of his father in 1953 and went back to Plains to take over the peanut farming operation of his family. He received a reasonably meager inheritance due to his father's remission of loans and the distribution of the property between himself and his other siblings. Jimmy Carter was urged to resist racial discrimination and aid the burgeoning civil rights movement during the same time. He started participating in Democratic Party activism.

In addition, Jimmy Carter is renowned for the charitable work he does through The Carter Center. He was successful in getting the treaties establishing the Panama Canal ratified. Jimmy Carter served as university distinguished professor at Emory University in Atlanta when Ronald Reagan defeated him in the 1982 re-election contest. In addition to creating the ranks of secretary of energy inclusively secretary of education in the cabinet, Jimmy Carter also successfully led the improved relations with China and managed to negotiate the Strategic Arms Limitation Talks treaty alongside the Soviet Union.

What is Jimmy Carter's net worth?

How much does Jimmy Carter earn per year?

The annual income of Jimmy Carter, the former president, is unknown. The salary of Jimmy Carter might differentiate. The federal government provides Jimmy Carter with a pension and security from the secret service. He also owns The Carter Center in Atlanta.

How tall is Jimmy Carter?

How old is Jimmy Carter?

Jimmy Carter was born to Bessie Lillian Carter and James Earl Carter Sr. The date of birth of Jimmy Carter is October 1, 1924, while the place of his birth is Plains, Georgia, United States.  Billy Carter, Ruth Carter Stapleton, and Gloria Carter Spann are the siblings of Jimmy Carter, the former governor of Georgia. Thomas Carter, an English immigrant who resided in Virginia in 1635, is the ancestor of Jimmy Carter. The Carter family farmed cotton in Georgia for several centuries. During his birth, Plains had 600 residents and was a boomtown.

The father of Jimmy Carter was a prosperous local businessman who owned a primary shop and invested in agricultural property. Throughout World War I, his father had served as a backup second lieutenant in the American Army Quartermaster Corps. The former president's early years were spent moving about a lot.

In the adjacent town of Archery, which was utterly inhabited by low-income African American households, the Carters made their home on a gravel lane. From 1937-1941, Jimmy Carter studied at Plains High School. At that point, the Great Depression had rendered Archery and Plains destitute. Still, Carter's family profited from New Deal agriculture grants, and his father had become a prominent community member.

Jimmy Carter enjoyed reading and was a hard-working student. Jimmy Carter, the former president, attended the Future Farmers of America youth club while a part of the basketball team at Plains High School, which sparked a lifelong passion for carpentry in him. The US Naval Academy has long been a goal of his. He began his undergraduate engineering studies at Georgia Southwestern College in the adjacent city of Americus, Georgia, in 1941. After transferring to Atlanta's Georgia Institute of Technology, he was accepted in 1943 to the Naval Academy.

Who is Jimmy Carter's partner?

Jimmy Carter and Rosalynn Smith are well recognized for their volunteering activities with Habitat for Humanity, a foundation with headquarters in Georgia that aids lower-middle-class working people worldwide in accessing clean water and building and purchasing their dwellings. Jimmy Carter is renowned for the charitable work he does through The Carter Center. However, during the Covid-19 pandemic, he did not visit The Carter Center in Atlanta following the pandemic norms.

What awards has Jimmy Carter won?

Jimmy Carter has won several honors and recognitions throughout his presidency, and numerous landmarks and institutions bear his name. The Jimmy Carter Library and Museum was inaugurated in 1986. Former president Jimmy Carter's tenure as a submarine officer was recognized in 1998 when the US Navy gave him the last Seawolf-class submarine honor.

In addition, Jimmy Carter was awarded the Hoover Medal, which honors engineers who have supported international causes, and the United Nations Human Rights Prize for their contributions to human rights. He received the Nobel Peace Prize in 2002. His books have been read aloud and have received nine Grammy nominations for Best Spoken Word Album.