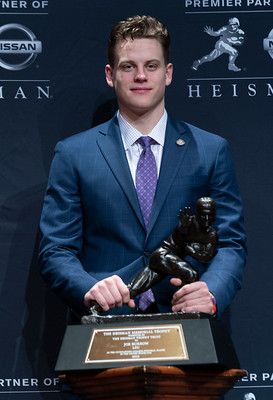 Joseph Lee Burrow is commonly known as Joe Burrow, the American football player.
Joe Burrow is a quarterback on the NFL team Cincinnati Bengals. Since his 2020 debut, Joe has proved himself as one of the best rookie quarterbacks ever seen.
Joe's interest in football was kindled when he attended the 2002 Rose Bowl. He was six years old at that time. His father was the then assistant coach at Nebraska University. Joe went on to play football in his school and college until he became a professional footballer with the Cincinnati Bengals.
Joe has the nicknames 'Joe Cool' and 'Joe Chill' as he is known for his calm attitude before a match. Joe was given the nickname 'Joe Shiesty' by Traphouse Sports. 'Shiesty' refers to a greedy person who hurts others on purpose. The name is about Joe's role as a quarterback who smashes through the defense of the opponent team.
He is also called 'Tiger King' after his pivotal role for the Cincinnati Bengals. Joe is also known by his childhood nickname, 'Joey.' The Bengals had a fortuitous pick in Joe Burrow, earning him the moniker 'Jackpot Joey' and 'Joey Franchise.'

What is Joe Burrow's net worth?

Joe Burrow has an estimated net worth of $10 million. His net worth comprises his current contract and brand endorsements. Burrow signed a four-year contract with the Cincinnati Bengals for $36 million, including a $600,000 base salary and a signing bonus of $23 million. Joe's endorsement deals with Nike, Bose, Cash App, Fanatics, Buffalo Wild Wings, and Lordstown Motors earn him an estimated $2 million.

How much does Joe Burrow earn per year?

How tall is Joe Burrow?

How old is Joe Burrow?

Joe was born into an athletic family in Ames, Iowa. His parents are James (Jim) Arthur Burrow and Robin Burrow. Robin worked as a school teacher. Jim was working with the Iowa State Cyclones at Ames when Joe was born.
His father, Jim, played football while at the University of Nebraska and then went on to play on the Canadian Football League and the National Football League (NFL) team Green Bay Packers. After retiring from professional football, Jim Burrows worked as the defensive coordinator and associate head coach at Ohio University (2005-2018). He had previously worked at Washington State University, Iowa State University, Nebraska University, Ames High School, Iowa, and North Dakota State University.
Joe has two older half-brothers, Daniel (Dan) and Jamie, who used to be football players at the University of Nebraska too. His uncle, John Burrow, played for the University of Mississippi.
Joe went to Athens High School in The Plains, Ohio, from 2011-2014. He was part of the school's football and basketball teams. The Bulldogs, the high school team with Joe in the lead, won seven football matches, a first in the school's history.
Joe's alma mater is Louisiana State University (2018-2020). He had earlier enrolled at Ohio State University in 2015, where he was placed as a reserve player for the Buckeyes. Joe switched universities in 2018 as he could not play college football at Ohio State University.
Joe has a degree in consumer and family financial services from Ohio State University and a master's degree in liberal arts from Louisiana State University (LSU).
At Louisiana, Joe was made starting quarterback immediately upon arrival. The LSU Tigers won the 2019 SEC (Southeastern Conference) Championship Game against the University of Georgia Bulldogs with a score of 37-10. LSU also became the top seed in the 2019 College Football Playoffs. Joe had a completion percentage of 76.3, with 60 touchdowns, six interceptions, and 5,671 yards in the 2019 season.
Under Joe's leadership, the LSU Tigers had a record 15 wins for no losses and won the College Football Playoff National Championship in 2019 against the Clemson Tigers with a 42-25 score. Joe was the recipient of the Heisman Memorial trophy (2019), the Manning Award(2019), and the Lombardi Award (2019).
Joe was conferred the College Football Playoff Offensive National Championship MVP (most valued player) title for his six touchdowns and 463 yards throw with a passer rating of 202.

Who is Joe Burrow dating?

Joe Burrow had been in a relationship with Olivia Holzmacher since 2017. It is not known if they are still dating as of 2022.

Joe began his professional football career when he was picked first overall in the 2020 NFL draft by the Cincinnati Bengals. His college football career made Joe one of the most sought-after players. In Joe's debut game, he threw for 193 yards and made a rushing touchdown, but they lost 16-13 to the Los Angeles Chargers.
Joe suffered an injury to his left knee in his debut season in November 2020. This curtailed his first season and lost him the chance to win the NFL Offensive Rookie of the Year Award. However, he recovered well and returned as the starting quarterback in September 2021.
Joe led the Bengals to a 24-21 win against the Jacksonville Jaguars, scoring two touchdowns and completing 25 of 32 passes, a feat that named him AFC (American Football Conference) Offensive Player of the Week.
His career-high 525-yard throw and 143.2 passer rating were made in a match with the Baltimore Ravens. He also threw four touchdowns without an interception, earning him another AFC Offensive Player of the Week. The Bengals won 41-21, their ninth win of the year, and were placed first in the AFC North (American Football Conference) list.
Joe brought the Cincinnati Bengals to their first playoff in years, winning the AFC (American Football Conference) Championship (2021), 27-24, against the Kansas City Chiefs. Joe made two touchdowns, an interception, and threw for 205 yards.
The Bengals were initially lagging 21-3 but won with an 18-point comeback, the highest in a conference championship tied with Indianapolis Colts. The win ensured a spot for the Bengals in Super Bowl LVI, their first Super Bowl since 1988. The Cincinnati Bengals ended the 2021 season with a 10-7 record.
Joe scored a touchdown and threw for 263 yards, but the team lost 23-20 to the Los Angeles Rams in the Super Bowl finals on February 13, 2022.
Joe Burrow has a career average of 68.2 completion percentage, 47 touchdowns, 19 interceptions, and 7,299 yards across 26 games.
Joe Burrow was a four-star rookie, and he was listed on the Top 10 prospect list in the NFL draft.
Joe was SEC (Southeastern Conference) Offensive Player of the Week twice in 2018 and once in 2019 while playing for Louisiana State University (LSU). He broke the previous LSU record for single-season passing yards and consecutive completed passes during a match.
Joe Burrow is the first player in LSU to throw over 300 yards in four successive games. He also holds the SEC record for all-time passing yards in a single season. He tied with Drew Lock for touchdowns in a single season in SEC records in 2019.
Joe Burrow was Walter Camp National Offensive Player of the Week twice in 2019 and tied for SEC Co-offensive Player of the Week once with Tua Tagovailoa and another time with Clyde Edwards-Helaire. Joe Burrow won the Heisman trophy (2019) with the maximum points (93.8%) and the most significant known margin (1,846 votes). Joe was part of the All-American Football team (2019) and the All-SEC football team (2019).
Joe made the NFL record for most completions by a rookie quarterback in a single game in his second game when he completed 37 of 61 passes at 316 yards and three touchdowns. In 2019, Joe turned out to be the first rookie quarterback to throw 300 yards and beyond in three consecutive games.
His next NFL record was in 2020, as the first rookie to score three passing touchdowns, a rushing touchdown, and a minimum of 400 passing yards throw during a single game, as well as being the only NFL player with maximum passes within their first eight games. Joe was named AFC Offensive Player of the Week twice in his 2021 season.
Joe Burrow broke fellow Cincinnati Bengals player Boomer Esiason's record for most passing yards in a game with his 525-yard throw in the 2021 match against the Baltimore Ravens. It is ranked fourth in NFL records for most passing yards in a game. He also tied with Boomer Esiason for most playoff wins.
The 2021 season saw Joe Burrow make the Cincinnati Bengals record of scoring 34 passing touchdowns and 4,611 passing yards in 16 matches played in a single season. He also had the highest completion percentage of 70.4% and 8.9 yards per attempt and the highest sacks taken (51) in the league.
Joe got the record of being sacked the most times (19) player in a single postseason in Superbowl LVI (2021).

Joe spoke about hunger and poverty in Athens, Georgia, USA, during his Heisman Trophy acceptance speech. This resulted in the Athens County Food Pantry transforming into the Joe Burrow Hunger Relief Fund. The fund received $450,000 in donations.

What awards has Joe Burrow won?

Joe spends a lot of time in the gym; weight-lifting is one of his favorite workouts. Joe is fond of lollipops, caramel apple flavor being his favorite. His current wardrobe is composed of designer labels; he is often seen in clothes featuring cartoon characters and superheroes.
Joe and his father, Jim, are fans of the 'Law & Order' TV show. Joe has learned to play only one song on the guitar, Tom Petty's 'Free Fallin'.