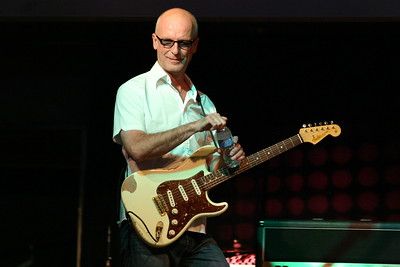 Mitchell is a renowned musician, best known for singles like 'Patio Lanterns', 'Rockland Wonderland', 'Rock And Roll Duty', 'Expedition Sailor', and 'Go For Soda'. Before starting his solo career, Kim Mitchell was the guitarist and lead singer for a famous Canadian band called Max Webster.

Kim Mitchell completed his school education at St. Clair Secondary School. In the '70s, he briefly performed for a local band called Zooom. However, soon he left the band and moved to the Greek Islands.

Let's explore the biography of this famous musician and learn more about his net worth, marital status, and best albums.

What is Kim Mitchell's net worth?

How much does Kim Mitchell earn per year?

Kim Mitchell earns about $100,000 per year. Most of this money comes from the sales of his records and live concerts.

How tall is Kim Mitchell?

How old is Kim Mitchell?

Joseph Kim Mitchell was born in Sarnia, Ontario, in 1952. His parents' identities remain a secret to date. He grew up in Sarnia and went to St. Clair Secondary School. Kim Mitchell developed an interest in music at an early age and started playing during his school years. He even started performing for local bands in the '70s. Later, he joined Zooom and moved to Toronto with the band.

In Toronto, Mitchell took guitar lessons from Tony Bradan. Subsequently, he moved to the Greek Islands for a brief period and formed Max Webster upon his return to Canada in 1973.

Mitchell worked with the band for about nine years as its lead singer and guitarist and then left it to begin his solo career in 1982. Kim Mitchell has also worked at the FM radio station Q107 (CILQ-FM) as a host from April 2004-August 2015.

Who is Kim Mitchell dating?

The best solo albums of Kim Mitchell include 'Akimbo Alogo'. The album was an international hit and had the hit single 'Go For Soda', Mitchell's only charted song on the US Billboard. Other notable albums include 'Shakin' Like a Human Being', which consists of hits like 'Patio Lanterns' and 'Easy To Tame', 'Rockland', which includes songs like 'Rockland Wonderland' and Expedition Sailor', and 'Aural Fixations' which ranked in the 17th place on the Canadian chart with Gold certification.

Besides being a solo artist, Kim Mitchell has also worked with other musicians. In 2006, he worked with the band Barenaked Ladies and provided a guitar solo for one of its songs called 'Wind It Up'. Mitchell also worked on television. In 1992, he made a cameo appearance on the season finale of 'The Kids In The hall' (season three).

Kim Mitchell is well-known around the world for his charitable works. One such example is the 1995 Kumbaya Festival. Mitchell participated in the event to raise money for AIDS research.

What awards has Kim Mitchell won?

Throughout his long, flourishing career, Kim Mitchell has won several awards. The most prestigious ones are the three Juno Awards he received in 1983, 1987, and 1990.