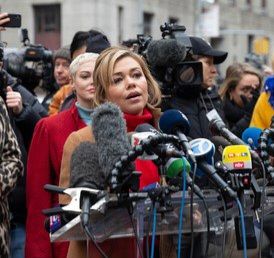 Lauren Paige Sivan is a news reporter and actress who hails from the United States.

Lauren Sivan is a well-known TV personality and journalist who is most recognized for her work as a news anchor for 'Good Morning LA' and 'Fox 11 News'. On BEONDTV, she has a new show called 'Life with Lauren.'

Lauren Sivan is a woman with a unique sense of style and a smart sense of humor. Lauren Sivan is a lifestyle, radio, and internet broadcaster who shares life stories, life savers, and life-affirming knowledge. Her venture into financial journalism led her to the burgeoning world of Crypto Currency, where she's interviewed some of the industry's biggest figures and featured on local and national television breaking down the nuts and bolts of this fascinating field.

What is Lauren Sivan’s net worth?

The net worth of Lauren Sivan is estimated to be around $1 million. She has risen to fame for being a renowned journalist. She's also made a sizable sum of money from numerous acting roles, and she'll continue to do so while she pursues her goals.

How much does Lauren Sivan earn per year?

The information regarding the annual income of Lauren Sivan is not available to the public.

How tall is Lauren Sivan?

How old is Lauren Sivan?

Lauren Sivan was born in Long Island, California, in the United States. Her mother is Jackie Sivan.

She enrolled at George Washington University, where she pursued a degree in political science and broadcast journalism. She continued her education at Long Island University after graduation, earning an advanced certificate in homeland security.

Who is Lauren Sivan dating?

Lauren was engaged to Rick Leventhal, the Fox correspondent with whom she had been in a long-term relationship. Their wedding, however, was postponed. There is no information available regarding her current relationship with anybody.

Lauren Sivan received her first, brief on-screen position with News 12 Long Island as an anchor and overnight reporter. Lauren started her broadcasting career in 2003 as a morning anchor and reporter on WETM-18 News in Elmira, New York. Lauren covered the 2006 Israel-Lebanon conflict from Jerusalem in conjunction with anchoring three broadcasts per night. She also reported from Mexico on the immigration crisis.

In 2008, Lauren Sivan proceeded to Fox News Channel, where she rose to prominence quickly, first as an overnight headline reader before moving into field reporting. She also anchored Fox news' The Strategy Room and reported for FNC programs such as 'The Fox Report' with Shepard Smith. She was also a frequent appearance on Fox's late-night show 'The Greg Gutfeld Show' and 'Red Eye' as a panelist.

Lauren worked for ten years as a Fox 11 News anchor and reporter. Along with Dr. Drew, she co-hosted a three-hour current affairs/discussion show called 'Mid-Day with Dr. Drew' on 790 KABC 790 talk radio in Los Angeles. Monday through Friday, the syndicated show airs across southern and northern California. She's also a contributor for InvestorPlace.com, where she focuses mainly on the cryptocurrency sector.

She accepted an offer as a correspondent for KTTV Fox 11 two years later, leaving New York partially because she disliked the weather there and partly because she wanted to remain closer to home by working with the Fox News Channel.

Her coverage of the Mexican immigration crisis and the Israel/Lebanon conflict in Jerusalem, which won her an Emmy nomination, are two of her most renowned efforts. She has also worked as a producer on shows like 'Fox & Friends' and 'Fox News Sunday.'

In recent years, she's been seen as the anchor of KTTV's hour-long 5 p.m. program 'Studio 11 LA', which covers a variety of issues such as entertainment, politics, and sports, as well as a reporter and anchor for Fox 11 News. She's also been cast in acting parts as a result of her celebrity, beginning with the 2014 films 'Taken' and 'Transcendence'. In 2018, she starred alongside Jeff Goldblum and Jodie Foster in the cyberpunk thriller 'Hotel Artemis', which depicts a nurse who runs a hidden hospital for criminals in a futuristic LA. She has established herself as a popular actor in addition to her journalism career. 'Nobodies', 'Ray Donovan', 'Raymond & Lane', and 'Murder of a Cat' are among the films and television shows in which she has appeared. In an episode of 'Drunk History' in 2015, she played Barbara Walters.

Lauren has also covered entertainment news for Extra and the TV Guide Network. She hosted the Los Angeles Emmy Awards in 2016.

Sivan presented the Oxygen crime thriller 'Abuse of Power' in 2018. On Oxygen, he hosted an hour-long true crime show. 'Abuse of Power', later dubbed 'Deadly Power', examines what occurs when people in positions of power are willing to go to any length to keep their power when it is threatened. She currently works as a freelance crypto Blockchain reporter and host of BEONDTV's 'BEOND the BlockChain.'

What awards has Lauren Sivan won?

Sivan has been nominated for her work on various high-profile shows throughout her career, including 'Red Eye', 'The Fox Record', 'Strategy Room', and 'On the Record'. She won the Emmy Awards twice, once for covering the 2006 Israel/Lebanon war in Jerusalem and again for reporting on the immigration crisis in Mexico.

Lauren Sivan is a native New Yorker who now resides in southern California. With her three dogs, she shares her time between LA and Palm Springs. She enjoys traveling and exploring exotic locations in her spare time. Sivan is also active on social media platforms like Instagram, Facebook, as well as Twitter.

We would love your help! If you have a photo of Lauren Sivan, either of them alone or a selfie that you would be happy to share, please send it to [email protected]If you have knowledge or information that you think would help us improve this article, please contact us.