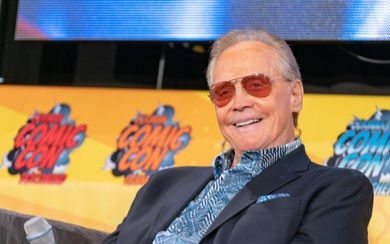 Being a voice actor, he lent his voice to many animated video games as well as television series. Lee Majors also reprised the mind-blowing role of Steve Austin in many TV movies during the late 1980s and 1990s.

Best known for essaying roles in 'The Six Million Dollar Man', 'Scrooged' and 'The Fall Guy', the actor has had a long career. His personal life has, too, been in the spotlight, having married four times and bearing four children.

What is Lee Majors’ net worth?

Lee Majors' approximate net worth is about $15 million.

How much does Lee Majors earn per year?

How tall are Lee Majors?

How old are Lee Majors?

Majors was born on April 23, 1939. His birthplace is Wyandotte, Michigan (USA). His father Carl Yeary, a manual laborer died in a work accident prior to his birth while his mother Alice Yeary, a homemaker died in a car accident when Lee was not even 2 years old. Lee was later adopted and taken care of by his uncle and aunt named Harvey Yeary and Mildred Poore. He lived with them in Middlesboro, Kentucky.

Lee Majors had a deep interest in football and started playing at Middlesboro High School and continued playing at Indiana University as well. He completed his graduation in 1957. After completing his graduate degree, he also earned a scholarship to Indiana University. Lee was transferred to Eastern Kentucky University in 1959 where he suffered a severe injury in the back while playing a game. This caused him paralysis waist down for some weeks marking an end to his football career.

In 1962, Lee Majors also graduated from Eastern Kentucky University and received his degree in physical education and history. Lee later received an honorary doctorate in 2006 from the same university.

Lee Majors began developing an interest in acting. He performed in many plays including 'Pioneer Playhouse' in Danville, Kentucky.

He stopped playing pro football and moved to the Los Angeles' Park and Recreation Department where he took the job with them.

Who is Lee Majors’ partner?

Lee Majors' current partner is Faith Majors. They have been married since 2002.

The actor has four children out of his four marriages. Lee was first married to Kathy Robinson in 1961 but they divorced in 1964. They have one son Lee Majors II. Lee was again married to Farrah Fawcett, later Farrah Majors from 1973 to 1982. They were a power couple in Hollywood throughout the 1970s and they both indeed had extraordinarily successful careers. Lee married Karen Velez in 1988 and they had twin sons and a daughter. Their marriage ended in 1994.

Lee appeared in a music video by the rock band titled ' When We Die' in March 2007.

Lee Majors came in contact with many prominent actors as well as industry professionals including agent Dick Clayton in Los Angeles. Lee also joined Clayton's acting school and later attended Estelle Harman's acting school where he prepared himself for his career in showbiz.

Lee Majors first appeared in a horror film titled 'Strait Jacket', in 1964. The next year, Majors' first credit role appeared in an episode of 'Gunsmoke' and from there Lee appeared in an installment of 'The Alfred Hitchcock Hour: The Monkey's Paw- A retelling.'

In 1965, a big break came when Lee was cast for the role in ABC's western series called 'The Big Valley' (1965-1969). He played the role of Heath Barkley in this show. Meanwhile, Lee has also appeared at the same time in Charlton Heston's movie 'Will Penny' in 1967.

Lee Majors played in a television series called 'The Ballad of Andy Crocker' in 1969 in the lead. In the same year, Lee was offered a role in the 1969 film 'Midnight Cowboy', but he had refused that role as the series 'The Big Valley' got a renewal for another season.

Lee starred in a television series 'The Fall Guy' in 1981 where he was portrayed as Colt Seavers, a Hollywood stuntman. Lee not only produced and directed the show but also sang a theme song for the same called "Unknown Stuntman". This series continued for five seasons until 1986.

In 'The Six Million Dollar Man', he has played the role of a former astronaut and colonel in the Air Force named Steve Austin. After getting injured in a NASA test flight, his character Steve Austin underwent a life-saving operation that provide him superhuman strength with a robotic eye. This show was very popular during the 1970s.

Lee Majors is best known for his starring roles as Colt Seavers on 'The Fall Guy' (1981) and as Colonel Steve Austin on 'The Six Million Dollar Man' (1974).

The Million Dollar man gained his first recognition through his role as Heath Barkley in 'The Big Valley' in 1965. Lee made his special recognition among 400 other actors including Burt Reynolds.

Lee Majors has raised funds for Dallas Aware group which supports people suffering from Alzheimer's and their caretakers, at the 2019 Aware affair on April 5.

This million-dollar man was often spotted with his wife at the Open Hearts charity gala in Beverly Hills.

What awards has Lee Majors won?

Lee Majors was nominated for Golden Globe- Best Performance by an Actor in a TV series in the year 1977.

He was offered a star on the Hollywood Walk of Fame for his contributions to the film industry.

Lee Majors had a deep interest in football. Also, he always wanted to be a football coach.