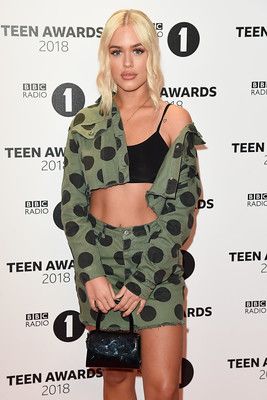 Lottie Tomlinson is an English makeup artist, model, social media star, and the founder of the famous self-tanning brand Tanologist.

Born in Doncaster in South Yorkshire, England, Charlotte Tomlinson, better known as Lottie, is a master of all trades. To gain work experience, she started working at a young age and even toured with her celebrity half-brother Louis Tomlinson and the entire One Direction band.

What is Lottie Tomlinson's net worth?

Lottie Tomlinson's net worth is around $10 million. She has amassed this fortune by working in several capacities as a makeup artist, social media star, model, author, and more. Her company Tanologist is also highly successful and generates revenue worth millions every year.

How much does Lottie Tomlinson earn per year?

Lottie Tomlinson has had a successful career as a makeup artist, model, social media influencer, author, and entrepreneur. However, the total amount of her annual earnings is unknown.

How tall is Lottie Tomlinson?

How old is Lottie Tomlinson?

Lottie Tomlinson is short for Charlotte Elizabeth Tomlinson. She was born under the zodiac Leo on August 4, 1998, in Doncaster, South Yorkshire, England. Tomlinson had a comfortable childhood living with her parents and siblings in England. Regarding her education, she attended Elizabeth High School in Hexham from 2013-2018. By the time she turned 15, Lottie Tomlinson had already started exploring different career options. She often accompanied her brother's band, One Direction, and worked as a makeup artist. In 2015, she also started a YouTube channel and uploaded makeup videos.

Who is Lottie Tomlinson dating?

As of 2022, Lottie Tomlinson is in a relationship with Lewis Burton, a former English tennis player and model. The couple has been together since 2020 and is expecting their first child together in 2022.

Who has Lottie Tomlinson previously dated?

Lottie Tomlinson has never kept her relationships private and has openly shared with her fans her relationship status during different periods. Her first known boyfriend was Martin Kendal. They separated in 2015 due to mutual differences. Lottie Tomlinson then dated Tommy Napolitano for five years until 2020. Tomlinson and Tommy Napolitano even have tattoos of each other inked on their wrists.

Who is Lottie Tomlinson's family?

Lottie Tomlinson was born in 1998 to Johannah Poulston and Mark Tomlinson. Due to her mother's previous relationship with Troy Austin, Lottie Tomlinson is related to former One Direction member Louis Tomlinson who is her half-brother.

She also has three younger sisters named Félicité Tomlinson and twins Phoebe and Daisy Tomlinson. Lottie Tomlinson's parents, Johannah and Mark Tomlinson divorced in 2011. Her mother, Johannah Poulton, then married Dan Deakin, with whom she had another pair of twins, Doris and Ernest. In 2016, Lottie Tomlinson's mother passed away after a long battle with leukemia. Her younger sister Félicité also died at a young age in 2019.

Lottie Tomlinson is a famous public figure known for her many talents. She first started off her career at the age of 15, traveling with her half-brother Louis Tomlinson and his band One Direction to gain work experience. On the band's tours, she observed and learned from Lou Teasdale, the stylist and makeup artist of the band. In 2015, during One Direction's On the Road Again Tour, Lottie Tomlinson served as Lou Teasdale's assistant. The same year, Tomlinson became famous for creating the rainbow roots hair look in collaboration with Bleach London.

After successfully establishing herself as a talented makeup artist, Lottie Tomlinson launched her own company Tanologist in 2018. Tanologist primarily deals in self-tanning products and other tanning accessories. Her company claims to have the world's first vegan dermatologically-tested and approved self-tanning collection. She often promotes her brand on her Instagram account.

In 2019, Lottie Tomlinson collaborated with the fashion label In The Style. Later, with Huda Beauty, she launched her eyelash collection. Next, Tomlinson started taking up modeling gigs. She even appeared on the cover of the 2020 edition of Sister Magazine. As a model, she has also worked with Lipsy London, Boux Avenue, PrettyLittleThing, and Ghost Fragrances. Lately, Lottie Tomlinson has also ventured into designing living spaces.

Today, Lottie Tomlinson is also famous as a social media star. Tomlinson started her YouTube channel in 2015 and initially posted makeup videos. Her first debut video was titled 'How To // Glitter Lips'. Eventually, she started creating vlogs and styling videos. She has 166,000 subscribers as of 2022, and her most viewed YouTube videos are 'Teenage Skin', 'How To // Mermaid Lids', 'Simple Everyday Make Up', 'How I Contour With Iconic London', and 'How To // Glossy Lidz'. Lottie Tomlinson is also an Instagram star with 4.6 million followers as of 2022.

In memory of her late sister Félicité, Lottie Tomlinson launched a clothing line Fizzy in collaboration with Miles Langford in 2019. All the proceeds from the event sales were donated to Child Bereavement UK. Since the death of her younger sister, Lottie Tomlinson has also become vocal about mental health issues. As of 2022, She serves as an ambassador for Sue Ryder, which is a bereavement support charity located in the UK.