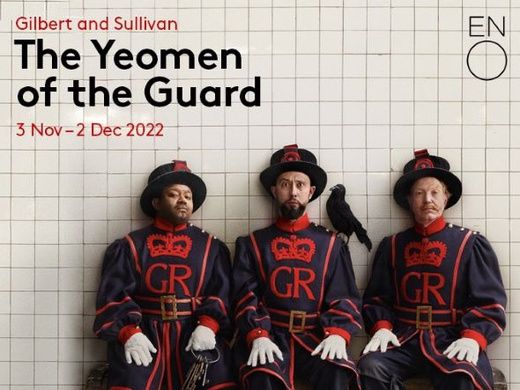 ENO The Yeoman Of The Guard In London

This is one of the most loved operettas from Gilbert and Sullivan, and it takes place in the centre of London. The story is entangled in the webs of unrequited love, deception, and mistaken identity, set in the Tower of London. London Coliseum Theatre, on St Martin's Lane is turned into the Tower of London for the English National Opera, while sparks are seen, romances are made, and fantastical plots unravel. Colonel Fairfax is imprisoned unjustly and this story plots the plan to free him before the execution. The young daughter of the Yeoman schemes with the jester, Jack Point, to have the wedding of her dreams. Everything does not go to plan, as chaos ensues, with false identities and a plethora of blooming romance. The director of the opera is Jo Davies, with designs from Anthony Ward. The ENO Orchestra is conducted by Chris Hopkins, with a dark and playful score by Arthur Sullivan. Anthony Gregory plays Colonel Fairfax, with Neal Davies as Sergeant Meryll, and Heather Lowe as Phoebe. Book ENO 'The Yeoman Of The Guard' tickets today.

About The ENO's 'The Yeoman Of The Guard' in London

What is 'The Yeoman of the Guard' about?

The London Coliseum Theatre on St Martin's Lane is turned into the Tower of London by the English National Opera, for the beloved comic opera, 'The Yeoman Of The Guard', by Gilbert and Sullivan. This is a story of unrequited love and forbidden romances, surrounding the characters of Colonel Fairfax, Phoebe, Sergeant Meryll, and Jack Point. Colonel Fairfax is unfairly imprisoned, while he is also falling in love with Phoebe, the young daughter of Beefeater Meryll. Phoebe wants to help Fairfax be released from the jail, so that they can get married and she turns to Jack Point for assistance. Jack is also a roving performer who wants to be with Phoebe, as his attraction for her grows too. See the live performance to find out if this story will have a happy ending. Productions from Gilbert and Sullivan are known for their fantastical plots and happy endings, but this opera is a little different. The story is full of chaos and this is a perfect stage adaptation of the tale by Gilbert and Sullivan.

See how the welcome of a travelling troupe of performers ensures forbidden romances, unrequited love, and fantastical plots.

The visionary Jo Davies directs this play for the English National Opera. ENO has always been the pioneer to recruit British talent and is at the forefront of UK opera.

What age is 'The Yeoman of the Guard' suitable for?

Visitors aged five and over are allowed in the theatre.

The duration of the show in London is two hours and 40 minutes.

Who is the team behind 'The Yeoman of the Guard'?

Jo Davies is returning to the London Coliseum to direct this play for ENO. Anthony Ward, the famous theatre designer, does the designs for the opera. Chris Hopkins is a Gilbert and Sullivan veteran, who conducts the orchestra with a score from Arthur Sullivan. Oliver Fenwick is the lighting designer, while Kay Shepherd is the choreographer.

Who is in the London cast of 'The Yeoman of the Guard'?

Where is 'The Yeoman of the Guard' being performed?

There are also many buses running day and night in London.

Q-Park Covent Garden is the nearest parking area. There are also other parking spaces near the area that can be used.

There are toilets located on all the five levels of the theatre in London. Accessible gender-neutral toilets are found in the basement, stalls, dress circle, and balcony.

The theatre is accessible, with lifts to travel to all the parts of the venue and wheelchair spaces in the dress circle, stalls, and stall boxes.