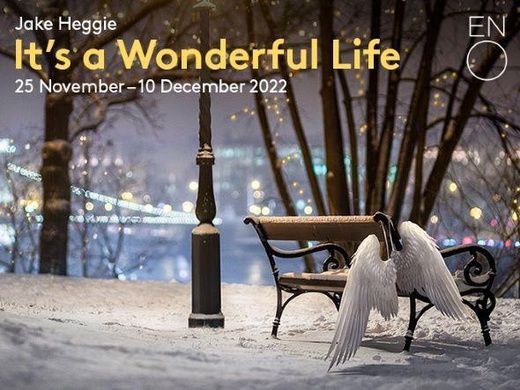 ENO's It's A Wonderful Life In London

The story of this opera is based on the 1946 film, 'It's A Wonderful Life', by Frank Capra, who was the director and producer. This opera is an operatic adaptation of the film by Jake Heggie and Gene Scheer. The opera is a classic Christmas story, rediscovered for the new generation and follows the tale of humble banker, George Bailey, in Bedford Falls, the idyllic little town enjoying a white Christmas time. George Bailey has spent most of his life helping others, abandoning his own dreams. He is now ready to leave everything behind. Clara, a guardian angel, enters the scene and sets out to help George understand that life at Bedford Falls would be less wonderful without his presence. Book ENO 'It's A Wonderful Life' tickets today and watch director, Aletta Collins, weave her Christmas magic.

About The ENO's 'It's A Wonderful Life'

What is 'It's A Wonderful Life' about?

The ENO's 'It's A Wonderful Life' is Jake Heggie and Gene Scheer's adaptation of the Christmas film with the same name by Frank Capra. Like the film, the opera also involved guardian angels and the idyllic little town, named Bedford Falls.

The opera follows banker, George Bailey, in a peaceful idyllic little town known as Bedford Falls, which is expecting a white Christmas. George is unable to get into the spirit of Christmas and is upset, as he thinks his life amounts to nothing. He is then visited by his guardian angel, Clara, who is a second-tier angel waiting to earn her wings. She shows that without George Bailey and his nature of helping others more than himself, Bedford Falls would be less wonderful.

This is a classic Christmas story made for the new generation. The film by Frank Capra has been loved by millions. The cast of this stage production is led by Frederick Ballentine, Gweneth Ann Rand, Jennifer France, and Michael Mayes. The director is Aletta Collins.

The house in the film can be found at 4587 Viro Road in La Canada Flintridge.

What age is 'It's A Wonderful Life' suitable for?

Visitors aged five and over are allowed inside the theatre on St Martin's Lane.

The duration is two hours and 10 minutes.

Who is the team behind 'It's A Wonderful Life'?

The creative team includes Nicole Paiement as the conductor, Giles Cadle as the set designer, Gabrielle Dalton as the costume designer, Andreas Fuchs as the lighting designer, Gene Scheer as the libretto, and Aletta Collins as the choreographer and director.

Jake Heggie and Gene Scheer's opera is commissioned by the Houston Grand Opera. It also has co-commissioners, the Jacobs School of Music at Indiana University, as well as San Francisco Opera.

Who is in the London cast of 'It's A Wonderful Life'?

Where is 'It's A Wonderful Life' being performed?

There are toilets located all over London Coliseum. Accessible gender-neutral toilets are found on the levels including the basement, stalls, dress circle, and balcony.

The theatre is accessible with lifts to travel to all the parts of the venue and wheelchair spaces in the dress circle, stalls, and stall boxes.