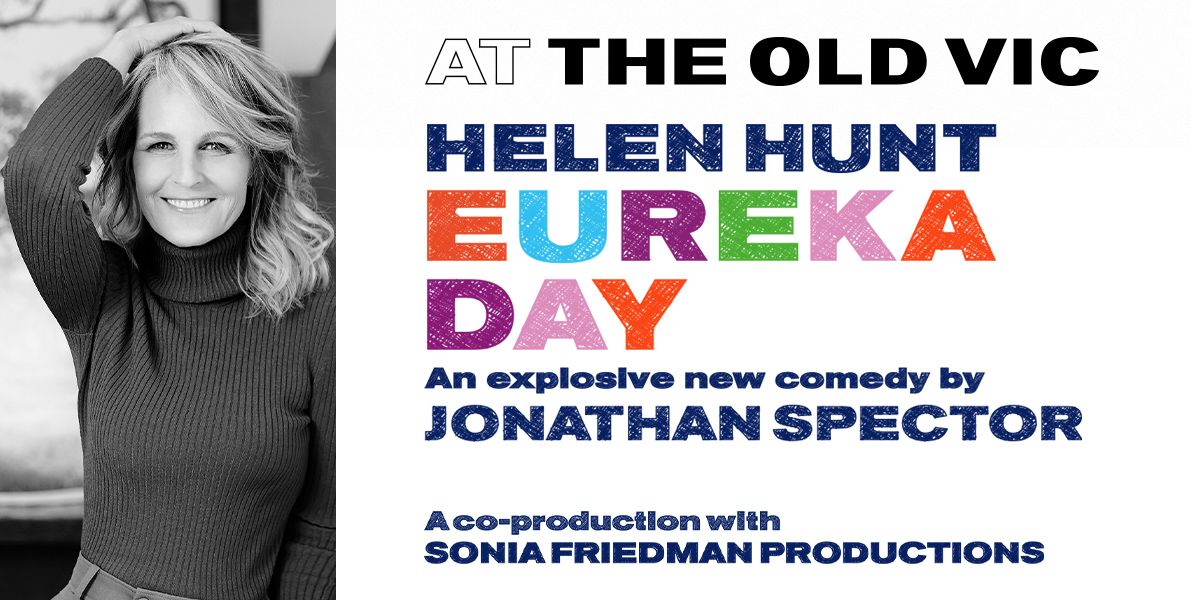 The progressive Eureka Day School, located in Berkeley, California, welcomes every child to the school, which is a matter of pride for all the parents on the Executive Committee. A public health scare arises, and togetherness and tolerance don't stand a chance. This is a timely and hysterical comedy from Jonathan Spector, where ideological warfare is created from a polite debate and a democratic utopia tears everything apart. Helen Hunt, the Golden Globe, Academy, and Emmy Award winner, stars in this production directed by Katy Rudd. Take a trip to the Old Vic Theatre and enjoy the European premiere of this show. Book 'Eureka Day' tickets today!

What is 'Eureka Day' about?

Jonathan Spector's multi-award-winning off-Broadway comedy is here to blow your minds, with none other than Helen Hunt starring! This is a hilarious and topical satire, playing at the Old Vic Theatre in London.

The Executive Committee at a progressive school in Berkeley, California, named Eureka Day School, is proud to confess that they welcome every child to their school. However, mumps soon start spreading to all the classrooms and all tolerance vanishes out the window. Facebook trolls begin and parents start arguing about the public health scare, as no one agrees on the facts. Then a democratic utopia tears everything apart right after.

The show first premiered at the Aurora Theatre in California, in 2018, and then was performed Off-Broadway for a show at Colt Coeur, in 2019. Enjoy this hysterical comedy where ideological warfare starts to take itself apart. Watch this sharp and funny satire at the Old Vic Theatre in London, where the story explores how a unified community turns on each other in the blink of an eye. Katy Rudd directs this play with the superb Helen Hunt starring in the show.

Buy 'Eureka Day' tickets now and enjoy the UK premiere of the show with your friends and family.

What age is 'Eureka Day' suitable for?

The show is recommended for 14+. Children must be accompanied by adults.

The running time of the show has not been announced.

Who is the team behind 'Eureka Day'?

Katy Rudd, who is famous for 'Camp Siegfried' and 'The Ocean At The End Of The Lane', directs this play in London. It is a co-production with Sonia Friedman Productions.

Who is in the London cast of 'Eureka Day'?

The cast is led by Helen Hunt. Helen Hunt is a famous Golden Globe, Academy, and Emmy Award winner. The rest of the cast will be announced at a later date.

Where is 'Eureka Day' being performed?

The address of the venue is The Old Vic Theatre, The Cut, Waterloo Road, London, SE1 8NB.

How do I get to the Old Vic?

The A302 will take you to the destination in the shortest possible time.

Waterloo is the nearest tube station and is around two minutes away from the theatre.

Waterloo train station is the nearest to the location.

Where can I park near the Old Vic?

There is parking near the location. You can also park at the NCP on Queen Charlotte Street or Trenchard Street car park.

Where are the toilet facilities at the Old Vic?

There are gender-neutral toilets at the venue. You will also find accessible toilets.

Is the Old Vic accessible?

There is an accessible entrance on Waterloo Road. The lift can be accessed from there.