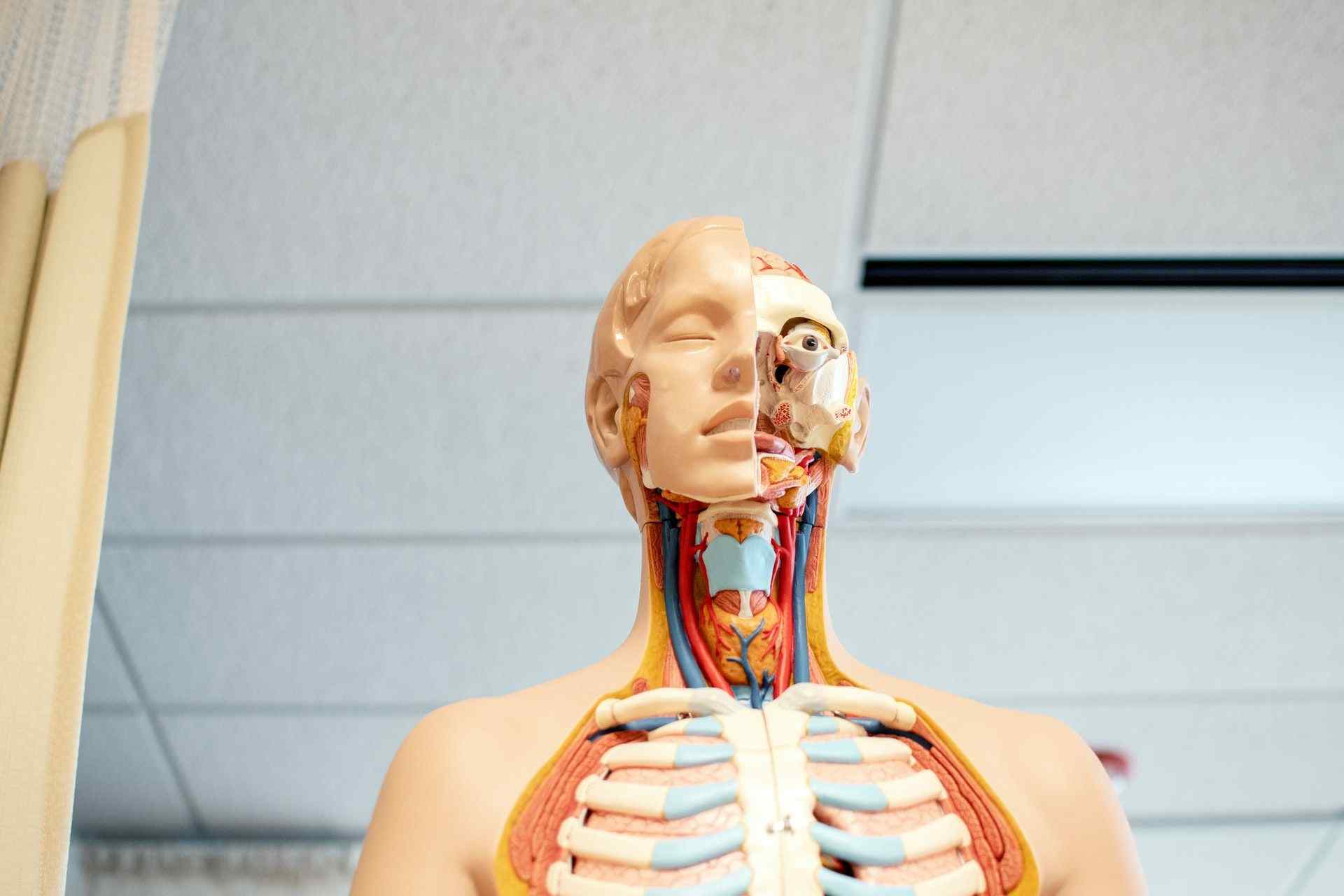 The human body features a complex muscular system that ensures the proper functioning of the body.

Most muscle names have Latin roots, and as such, to understand the meaning of a muscle name or the entire muscular system knowing Latin roots will come in truly handy.

Some of the common muscle names integral to the muscular system are abductor digiti minimi, biceps brachii, medius medium, longus long, brevis short, maximus large, and several others. Discover facts about muscles from head to your little finger here.

Names Of Back Muscles

Muscle fibers have an integral role in the anatomy of the human body. Take a look at the list of back muscles below, which have Latin origin and roots.

Gluteus Maximus is the human body's biggest muscle. It is huge and strong since it is responsible for holding the trunk of the body upright.

Iliocostalis, lateral branches of the posterior rami of the cervical, thoracic, and lumbar spinal neurons, innervate this muscle.

Intrinsic muscles let you bend, twist, flex, and stretch your back by stabilizing your spine. They also assist you in controlling your trunk, neck, and head.

Latissimus Dorsi, often known as the lats, are a pair of big wing-shaped muscles that go from the upper to the lower back.

Levatores Costarum muscles are a group of 12 tiny muscles.

Multifidus is the posterior rami of spinal neurons innervate.

Oblique Muscles are those that are connected to the sides of the spine. They assist us in rotating the spine and maintaining good posture.

Piriformis Muscle is a gluteal muscle in the lower limbs.

Rhomboid major is a large and slender saddle muscle that links the scapula to the spinal column's spinous processes.

Sacrospinalis is made up of three muscles and is also known as the erector spinae.

Splenius Cervicis is a small band of tendons that originates from the spinous processes of the third through sixth vertebrae and is located near the base of the neck.

Superficial Muscle is located in the anterior compartment of the thigh.

The Intermediate muscles aid in breathing.

The Longissimus muscle is the longest and thickest of the erector spinae muscle group, forming the central column.

Trapezius, the traps, or big muscles of the upper back, are formed like trapezoids or diamonds.

Are you looking for information on the role of the muscle tissue present in the arm? Let's look at the names of the muscles in the arms from the list below.

Anconeus is a tiny muscle found in the back of the elbow. It connects the lateral epicondyle of the humerus to the lateral surface of the olecranon of the ulna.

Biceps Brachii is one of three muscles in the arm's anterior compartment. The prefix bi means that the muscle has two origins.

Brachialis is the final of three arm muscles that make up the anterior compartment of the arm.

Coracobrachialis seems to be the most medial muscle in the arm's anterior compartment.

Deltoid muscle has an inverted triangular form. It is further subdivided into three sections: anterior, middle, and posterior.

Extensor Digiti Minimi is a thin forearm muscle located just on the ulnar side of the extensor digitorum communis, with which it is commonly associated.

Labrum Tear is a tear in the cartilage that protects the socket that keeps your upper arm bone in place.

Myocardium is the heart's muscular layer. Its anatomy shows that this muscle is made up of heart muscle cells.

Pectoralis Major is a broad, fan-shaped muscle that runs from your collarbone to your mid-chest.

Pectoralis Minor is a narrow, flat muscle that links to the third, fourth, and fifth ribs and is located directly under the pectoralis major.

Pronator Teres muscle runs from the top of the humerus down the forearm and connects to the ulna. It aids in turning the palm downward.

Strain occurs when a muscle or tendon in the shoulder strains or rips. Strains range in severity from minor to severe.

Subscapularis muscle is the biggest and most powerful of the rotator cuff muscles. It is a triangle muscle located on the front of the upper arm, starting at the shoulder blade.

Triceps Brachii is a big muscle located in the arm's posterior (extensor) compartment.

Let's look at the names of the leg muscles listed below.

Adductor Magnus is a big triangle muscle located within the thighs.

Biceps Femoris is a muscle located in the posterior compartment of the thigh, on the posterolateral side.

Calf in human anatomy, the calf is the rear section of the lower leg.

Dorsal foot muscles are located on the dorsum of the foot and are responsible for toe extension.

Extensor Hallucis Longus is a slender leg muscle that is positioned between the tibialis anterior and the extensor digitorum longus.

Fibularis Brevis, also known as peroneus brevis, is a small muscle that forms the group of lateral leg muscles along with the fibularis (peroneus) longus.

Flexor Hallucis Longus long is one of three deep muscles in the posterior compartment that connect the plantar surface of the big toe's distal phalanx.

Gastrocnemius muscle is sometimes referred to as the calf muscle.

Gracilis muscle is a slender, flat muscle found in the groin.

Hamstring is a single big tendon located behind the knee or in a similar location to help with movement.

Lumbricals are four tiny skeletal muscles that work in conjunction with the tendons of such flexor digitorum longus long muscles.

Obturator muscle is a flat triangular muscle covering the outside portion of the pelvic wall.

Patella is connected to the quadriceps femoris tendon, which relaxes to extend/straighten the knees.

Peroneus muscles are located on the front side of the lower leg. They also assist with dorsiflexion.

Plantaris is a tiny muscle in the lower leg's back. Like the previous two stated muscles, it is involved in plantar flexion.

Plantaris Muscle is a tiny muscle with a low belly and a long, thin tendon situated in the posterior lateral compartment.

Popliteus Muscle, while walking, this muscle in the leg unlocks the knees by laterally twisting the femur just on the tibia and during the closed chain stage of the gait cycle.

Rectus femoris is a muscle that attaches at the hip and extends to the kneecap.

Rectus Femoris muscle connects at the hip and extends to the kneecap. The location of the foot muscle is in charge of assisting in knee extension and movement.

Sartorius Muscle is the human body's longest muscle. It is one of the anterior thigh muscles, along with the quadriceps femoris.

Semimembranosus muscle is distinguished by its flat tendon of location or origin in the foot.

Semitendinosus muscle is situated between the biceps femoris and the semimembranosus.

Soleus muscle is a strong muscle in the rear of the lower thigh.

The pectineus muscle is a hip enured, one of five big muscles on the medial thigh.

The quadriceps is a big muscle in front of the thigh that stretches or bends the hip joint.

Tibialis Anterior muscle is located in the shin and is important for ankle flexion.

Tibialis Muscles, located on the front and back sides of the lower thigh, provide dorsiflexion for pointing the foot and toes upward.

Tibialis Posterior is a tiny muscle located in the rear of the calf that extends to the posterior compartment of the leg in the body.

Triceps Surae is made up of two muscles in the calf: the two-headed gastrocnemius and the soleus.

Vastus Intermedius is the deepest foot muscle in this group. It is found on the lateral top side of the femur and helps with the movement with its key location.

Vastus Lateralis is often referred to as the vastus externus. It is the biggest and most strong foo muscle, located on the side of the thigh.

Vastus Medialis is a teardrop-shaped foot muscle that reaches the knee.

Here are some of the popular muscle names that are present in the shoulder:

Digastric muscle is depressed by the mandible. It gets its name from the fact that it has two bellies that are connected to one other.

External Oblique Muscle, which extends from the bottom part of the ribs around and down to the pelvis, is one of the outermost abdominal muscles.

Infrahyoid Muscles compress the hyoid bone and govern the posture of the larynx.

Infraspinatus is a broad triangular muscle located beneath the supraspinatus on the back of the shoulder blade.

Latissimus Dorsi is the flat rectangular muscle of the back that helps the arms rotate and move away and closer to the body.

Levator Scapulae do exactly what their name implies: they help to raise the scapulae or shoulder blades.

Omohyoid muscle is a long, thin muscle with superior and inferior bellies and an intermediate tendon that runs obliquely in the lateral cervical area.

Pectoralis Major is a big fan-shaped muscle that runs from the armpit to the collarbone and down over the lower chest. It attaches to the sternum (breastbone).

Pectoralis Minor is a muscle. This muscle, the smallest of the pectoralis muscles, extends from the upper ribs to the shoulder region.

Pectoralis Muscle is any of the muscles that link the front walls of the chest to the upper arm and shoulder bones.

Platysma Muscle of the human neck is a superficial muscle that overlays the sternocleidomastoid.

Posterior Scalene arises from the cervical spine; however, it joins to the second rib instead.

Rotator Cuff is a set of four muscles that start in the scapula and attach to the top section of the humerus, known as the humeral head.

Serratus Anterior is a three-sectioned muscle that begins at the shoulder blade and attaches to the first eight ribs.

Sternocleidomastoid muscle is one of the broadest and most basic cervical muscles.

Subscapularis is a big triangle muscle located between the humerus and the collarbone. It aids in the rotation of the humerus.

Supraspinatus is a triangle muscle located near the back of the shoulder blade. A popular muscle name.

Teres Major is a muscle that aids in the rotation of the upper arm.

Trapezius Muscle is a broad surface muscle that runs from the skull base down the cervical spine, into the lower thoracic spine (middle back), and out to the shoulder blade.