19 Amaze-wing Facts About The Argentavis For Kids 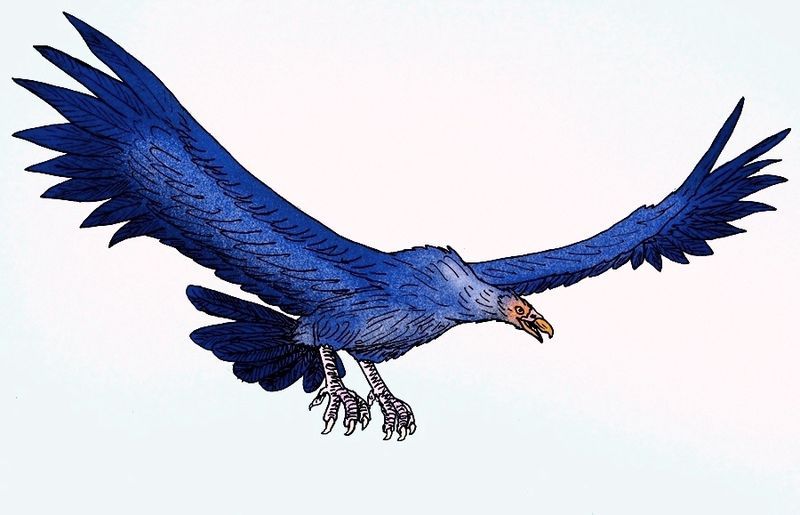 Argentavis is an extinct flying bird genus within the Teratornithidae family and Aves class. Argentavis was one of the world's largest flying bird groups to ever exist, and the species described in 2014, Pelagornis sandersi, probably exceeds it in wingspan. The only species Argentavis magnificens is sometimes known as the Giant Teratorn. Fossils of this extinct species were collected from three sites of the Andalhuala and Epecuen Formation. This formation, situated in north-western and central, Argentina (South America) dates back to the Late Miocene period in the Huayquerian around 9-6.8 million years ago, and a good number of Argentavis fossil remains have been recovered. The known upper arm bone or humerus of the Argentavis specimen was damaged to some extent. This arm was a little shorter in comparison of size to the human arm. The body length, tip of the bill to tip of the tail was 138 in (3.5 m). These species are almost as tall as a human and measured around 59-66 in (1.5-1.8 m). The Teratornithidae family is related to New World vultures. There are six genera in this family with at least seven species.

If you enjoyed reading these cool Argentavis facts, then make sure to check out these fun facts about the Caviramus and Ludodactylus on Kidadl.

Was the Argentavis a dinosaur?

How do you pronounce 'Argentavis'?

The pronunciation of Argentavis is 'ar-jen-tay-vis.'

What type of prehistoric flying bird was an Argentavis?

Argentavis was one of the largest flying birds of the order Cathartiformes and phylum Chordata. These birds were active predators and scavengers. This bird could have driven away smaller predators due to the size of Argentavis. Argentavis magnificens is the only species. This species is related to New World vultures like the Andean condor, the turkey vulture, and storks. Argentavis (Campbell and Tonni, 1980) is called teratorn meaning monster bird. Argentavis could easily travel long distances. The short flights this bird took were soaring and they used a flapping flight. The fossil suggests that the breast muscles of this bird were not powerful for flapping of wings for long flight periods. A different method was used when this species reached open spaces, thermal soaring, with rising hot air providing lift. Even with the help of thermal, this giant species was going over the limit of gliding flight. This species would depend on the wind to take off.

In which geological period did the Argentavis live?

Argentavis magnificens lived in the Late Miocene period in the Huayquerian around nine to 6.8 million years ago.

When did the Argentavis become extinct?

Where did an Argentavis live?

Argentavis lived across South America in central and northwestern Argentina.

What was an Argentavis' habitat?

These giant birds preferred a habitat range with hot and dry open, large spaces. Across the Andean foothills of Argentina, the climate was drier and warmer compared to current conditions and this also would have allowed the birds to stay aloft on top of thermal updrafts.

Who did an Argentavis live with?

The social behaviors of these active predators are not known. However, as predators, these giant birds might have lived on their own.

How long did an Argentavis live?

The exact maximum or average life span of Argentavis magnificens is not known. When compared to other similar predators, the study suggests that these teratorns lived a long life. Also, there were no known aerial predators that would consider these large birds as prey.

Comparing these birds of the Late Miocene era from Argentina with extant birds indicated that these birds could have laid one or two eggs and the mass of the Argentavis egg could have been 2.2 lb (1 kg), which is smaller than ostrich eggs. Argentavis breeding depends on the climate due to which the eggs were probably incubated over winter. Both parents generally would take turns gathering food and incubating the eggs. After around 16 months the young one would become independent but would only reach maturity after a dozen years.

These predatory birds were large with large wings with weak breast muscles. However, this allowed fairly right estimates of their life's length. These vulture-like Argentavis species are known from a single upper arm bone or humerus structure that is damaged to some extent. This humerus was only a little smaller in comparison of size to a human arm. Estimates show that these large species had large feet, strong legs with stout and this would have allowed them to walk easily. Their bill was slender and large and had a wide gap near the hooked tip.

How many bones did an Argentavis have?

The number of bones in the Argentavis skeleton is not known. The fossils that were found were several partial remains.

The mode of communication of these animals is not known. However, they might have communicated through calls, songs, and vision.

How big was an Argentavis?

How fast could an Argentavis move?

These enormous birds are given the name 'master gliders'. From these birds' structure and size of their wings, they would mainly fly for short periods by soaring and flapping. They also might have used thermal currents. The estimated minimal flight velocity (speed) was 25 mph (40 kph). Their takeoff would depend on the wind too. Their wings too were too long for flapping until they were off the ground, even though they had strong legs that had the ability to provide jumping or running start. Flying simulations of these species were created by Sankar Chatterjee of the Museum of Texas Tech University. This study indicated that Argentavis could not have produced the required lift for taking off by running. A little height was necessary for take-off. The estimation of maximum power that their flight muscles might generate was done by Chatterjee, which showed that it was three and a half times less than the minimum power required for flying. The maximum speed calculated by Chatterjee was 43.4 mph (70 kph). So, he also thinks that these birds were capable of soaring for a large distance and despite their size, they fly through the air as easily as the smaller white stork or buzzard. 6 million years ago Argentina was drier and hotter than today, so the powerful thermals needed for their lift were present in the air.

How much did an Argentavis weigh?

The weight (body mass) of these enormous birds is 154-159 lb (70-72 kg) as calculated by modern techniques. However, previously the published weight of these birds suggests they were around 180 lb (80 kg). Also, the weight of the largest living bird, the Andean condor is only up to 33 lb (15 kg).

There is no specific name given to either male or female Argentavis magnificens.

What would you call a baby Argentavis?

There is no specific name given to a baby Argentavis magnificens.

These species were scavengers and fed mostly on carrion. These animals would search for food in their large range of about 190 sq mi (500 sp km) and possibly utilized the north-south directions to escape adverse winds. These predatory teratorns seem to be aerodynamically less adapted for predation than their related species. These species had eagle-like long beaks and were active predators, which is quite different in extant condors and vultures. They could catch their prey in the air and eat them without landing on the ground. They might have used their large size to scare land predators to feed on their kill. It is indicated from the structure of the skull that these species swallowed their prey in one piece rather than tearing them up.

These animals were possibly pretty aggressive as they were active predators.

The related Taubatornis campbelli was the earliest known species of teratorn. Although Teratornithidae species were found in South and North America, teratorns were mostly restricted to North America.

What is the largest bird of prey ever to have lived?

What is the wingspan of the Argentavis?

Here at Kidadl, we have carefully created lots of interesting family-friendly prehistoric animal facts for everyone to discover! For more relatable content, check out these Peteinosaurus facts and Thalassomedon facts for kids.

You can even occupy yourself at home by coloring in one of our free printable Argentavis coloring pages.