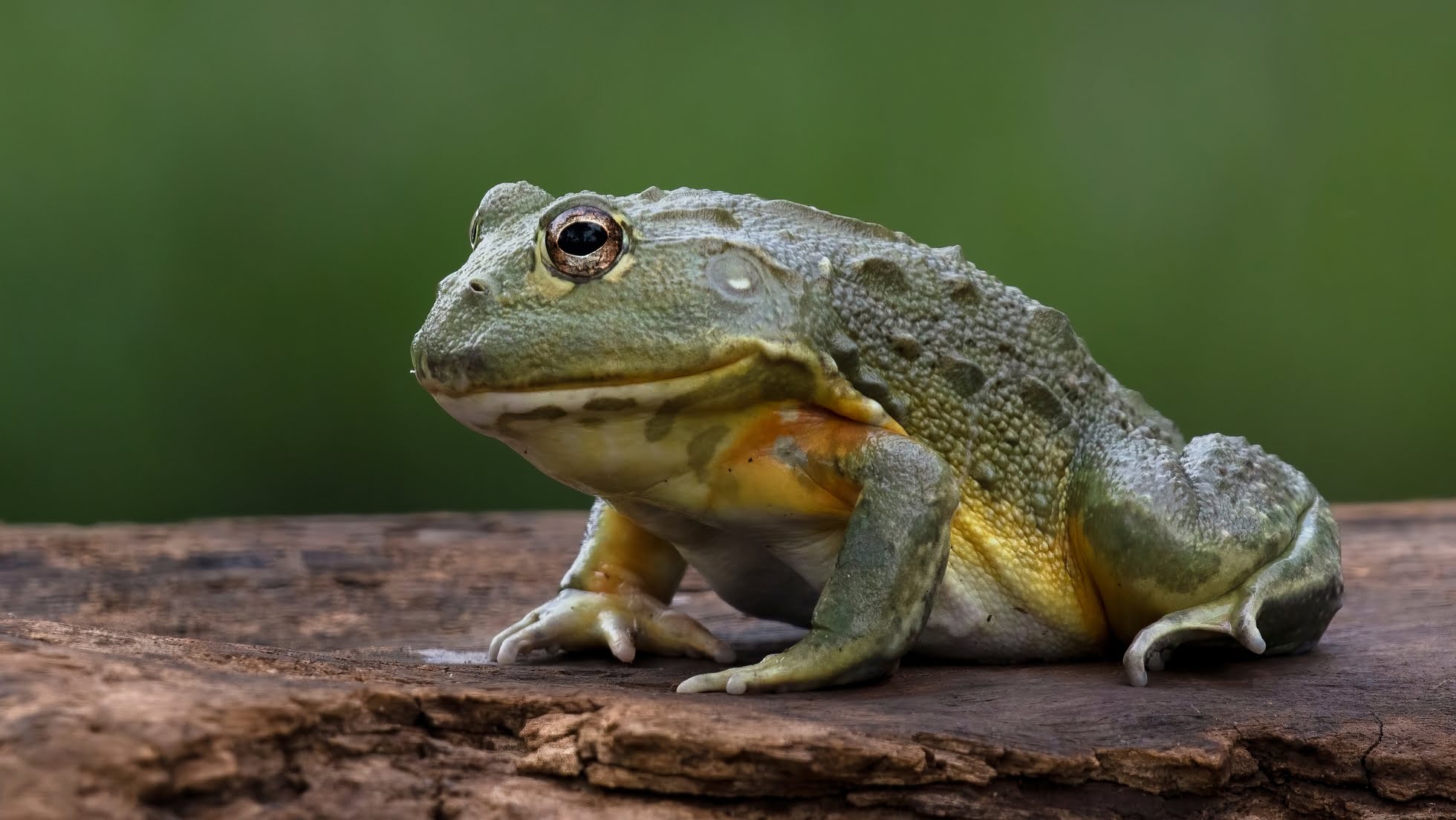 Do you like the rainy season? Well, if so, you are not alone! There are several animals who love the rainy season, the foremost of them being the giant African Bullfrog. They are the second biggest frog in all of the world, and only emerge out into the shallow waters during the breeding season. Found all over Southern Africa, these amphibians are angry, aggressive, and ready to fight! Though they spend most of their time in the dry season under the soil to keep cool, they are back in action as soon as the water starts to rise. Well known for eating their own children and having the teeth to gobble up any animal in the shallow water they call their habitat, these bullfrogs from Africa are set to make the most of their breeding season.

So, are you interested in these amphibians and how these particular bullfrogs live their life? Maybe you want to know all there is to know about the Pyxicephalus species, like about the males and them looking after their eggs, as well as the pet trade they are a part of? If so, then do read on for interesting facts about the African Bullfrog, and some cool African bullfrog facts thrown in for good measure. Do also be sure to check out our marine toad and American Bullfrog articles for more such facts!

What type of animal is an African Bullfrog?

The African Bullfrog (Pyxicephalus adspersus) is a type of frog.

What class of animal does an African Bullfrog belong to?

The African Bullfrog (Pyxicephalus adspersus) belongs to the Amphibian class.

How many African Bullfrogs are there in the world?

Due to lack of research, this number is unknown.

Where does an African Bullfrog live?

The African Bullfrogs live in wetlands and savannas.

What is an African Bullfrog's habitat?

African Bullfrogs are usually at home in the dry savannas of Southern Africa. In places like this, they are found around water, marshes, swampland, and other sources of water. They are found in countries like South Africa, Botswana, Angola, Mozambique, Congo, Zambia, and some other African countries too.

Who do African Bullfrogs live with?

The African Bullfrogs spend up to 10 months hibernating. They sleep away the entire dry season and come out only to mate during the breeding seasons. As a result, they spend most of their lives alone.

How long does an African Bullfrog live?

Usually, African Bullfrogs live to around 30 years. However, unlike many other animals, they thrive in captivity, frequently living up to 35 years. The oldest known frog has been 45 years old, which is an amazing lifespan for this species.

They reproduce by mating. The female then lays up to 4000 eggs in shallow water, though the eggs will hatch on top of the water. It takes two days for the eggs to hatch, and almost a month for the tadpoles to grow up. However, whether due to the weather, the water, or being hunted by predators, very few eggs actually survive. Usually, the males of the bullfrogs are supposed to protect them. However, It is very common for adult males to eat their own tadpoles.

According to the IUCN Red list, the African Bullfrogs are marked as Least Concern. However, their population is declining due to human intervention, and soon, they might slip down the list.

The African Bullfrog (class Amphibia, order Anura, family Pyxicephalidae, Pyxicephalus species) is the second biggest frog in the world. These frogs usually have smooth olive-green skin without any bumps or cuts. The males have a yellow throat (called the dewlap) while the females have a lighter shade, somewhere cream in shade. They do not have webbed feet but instead have a callus on their hind feet which helps these frogs dig. They also shed their skin regularly and will eat it when they shed it. The young ones of these amphibians will be far more colored. There is really no nice way to say it, but they are ugly. The African Bullfrogs maintain their reputation as the most aggressive bullfrog around. Not only do they have very beady eyes, but they also have sharp teeth, an unfriendly demeanor, and very poorly colored olive-green skin. Overall, there are many cute and colorful frogs around. The African Bullfrogs are not it.

How big is an African Bullfrog?

The African Bullfrogs are some of the biggest frog species around. They can be up to nine inches long, which is just some inches smaller than the Goliath frog, the biggest known frog species in the world. The females are somewhat smaller at around six inches, but still very significant.

How fast can an African Bullfrog run?

The African Bullfrogs are not very fast runners. Due to their size and weight, they find it difficult to travel through mud and swamps. Their hunting strategy is to camouflage and wait for the prey to cross them, where they simply grab them and do not let go. Even so, they are very fast swimmers and can traverse through the water quickly.

How much does an African Bullfrog weigh?

The African Bullfrogs weigh around 3.1 lb for males and approximately 1.5 lb for females. This is because the females are usually smaller in size, and so, weigh less.

There is no particular name given to the male or female of this species. They are simply called the male Bullfrog and the female Bullfrog as the situation needs. However, a group of these bullfrogs can be called an army or a knot. Outside of the mating season, it is impossible to see such armies or knots around.

What would you call a baby African Bullfrog?

Baby African Bullfrogs would be called tadpoles, like every other young of this species and more.

The African Bullfrogs are hardened carnivores and eat meat almost all their lives. They start by eating small insects and fish, and an adult male African Bullfrog can even eat small rodents, birds, reptiles, and even their own tadpoles. Even though the adult males are tasked with protecting the tadpoles until they are older, cannibalism is not unheard of in the African Bullfrogs.

Would they kill a human? Not at all. But would they leave a nasty bite mark that will have you in bandages for weeks to come? Most definitely. One of the most prominent features of this species is the African Bullfrog teeth. They are sharp, and enough to kill a smaller creature. Since humans are larger, they can only bite down in aggression, but not cause any permanent injuries or death.

Many people have these frogs as pets, and you can too, provided you are ready to take care of them. These frogs are very high maintenance and require an extensive habitat, constant food, sunlight, and care. In addition, they are not very friendly towards humans, and will frequently attempt to bite you too. If all that does not bother you, then you can shop for or adopt these frogs any day.

Having your own African Bullfrog

Purchasing your own frogs and African bullfrog care should not be too much of a problem. They sell for approximately $25-75. If possible, you should get them when they are young, because adult (males in particular) of this frog does not do well with humans if they have not had interaction with them in the past.

It is recommended that you have a six-foot by six-foot glass aquarium, with enough access to sunlight, water, and humidity. You should feed your frog small rodents, worms, fish, birds, or any other meat you can find twice a week. You do not need to bathe them, just ensure their habitat and water stay clean. It is not recommended that you house them with other animals, because your frogs may attack or kill them.

These frogs are one of the only few frogs around who have "teeth". While they do have multiple small teeth in their jaw, their major teeth are called odontodes. They grow superficially on top of the skin and are much larger than your average tooth. They use these teeth-like growths to grab and hang onto prey, but can also bite very hard.

Here at Kidadl, we have carefully created lots of interesting family-friendly animal facts for everyone to discover! Learn more about some other amphibians, including pool frog or tree frog.

You can even occupy yourself at home by drawing one on our African bullfrog coloring pages.