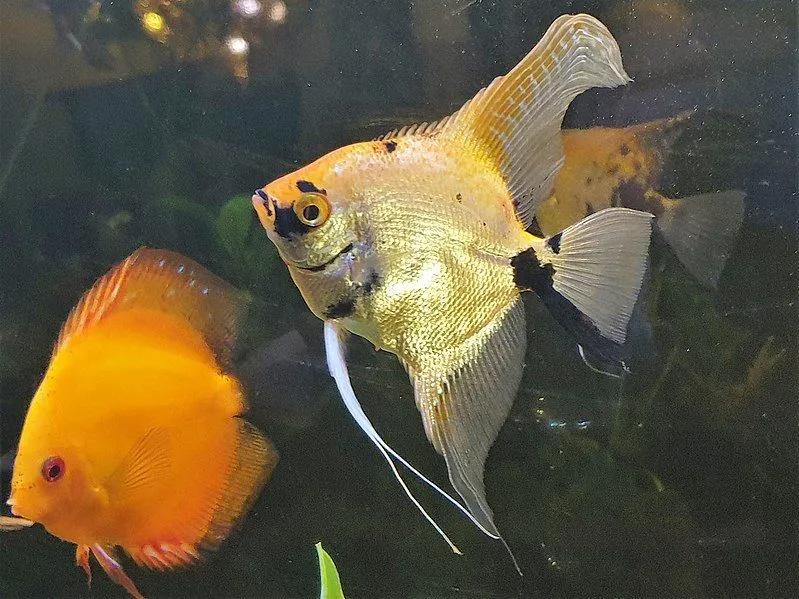 Are you looking for a perfect fish for your tank? Then the Freshwater Angelfish is the species you have been looking for! This freshwater fish is a popular tank fish with vertical stripes, friendly nature, and more. They belong to the Pterophyllum family. Though they have a fixed water temperature range, the Freshwater Angelfish is a fish breed that requires little care otherwise. In the wild, you can find them in tropical rivers and freshwater lakes all over the world, but especially in Colombia, Brazil, Guyana, French Guiana, and Peru. In captivity, the P Altum is a favorite of the people.

Depending on the species, they have a variety of Angelfish lifespan, Angelfish size, shapes, and variations amongst them. With over 90 species of this animal, there is no shortage as to the variety of this tropical family of fish. Some are as large as 13 in long, whereas others are less than 7 in long. There is also great variation in their care, behavior, tank requirements, pair, breeding, type of water, and other aspects of Angelfish care.

What type of animal is an Angelfish?

Angelfish is a type of fish.

What class of animal do an Angelfish belong to?

Angelfish belong to the fish class.

How many angelfish are there in the world?

There are about 90 species of marine Angelfish.

Where does an Angelfish live?

Angelfish lives in the ocean. Some of the other variety of Angels can be discovered in every ocean in the world

What is an Angelfish's habitat?

Angelfish live nearly entirely in calm, slow-moving water. The majority of these fish have dazzling colors that allow them to blend in with the brightly colored reefs, algae, and other features of their coral reef environment.

Who do Angelfish live with?

Young freshwater Angelfish often live in a group, but adults prefer a solitary life.  When angelfish reach maturity, they become extraterritorial and violent towards another fish.

How long does an Angelfish live?

In the wild, Angels have been recorded to live up to 10 years. In captivity, if taken care of well, Angels can live up to 15 years too.

Mature angelfish readily pair up and spawn. They clean an even vertical surface to lay their eggs on and scare away other fish. Spawning occurs when the female lays a series of eggs on the already prepared facade, which the male fertilizes. The breeding age of Angelfish between the ages of 6-12 months. We have to set up a freshwater aquarium large enough to prepare breeding Angelfish.

Angelfish's conservation status is not extinct. Most species have been marked by the IUCN Red List as a species of Least Concern. The Emperor, the French, the Yellow, and Blueface Angelfish are a few species with that designation.

These fish are uniquely cute with their tall, pointed fin and their beautiful sparkling scales. Marine Angelfish can sometimes be red, gray, blue, or yellow in color, with a variety of colorful markings and lines. Angelfish in freshwater can be silvery-blue in color and have dark, longitudinal streaks

Angelfish, demonstrate social status using chemical signals carried in the bile and urine they release into the water. The bright-colored body of marine Angelfish provides them camouflage in the coral reefs in the ocean and plays important role in communication.

How big is an Angelfish?

How fast can an Angelfish swim?

How much does an Angelfish weigh?

Most Angelfish are weighed at up to 2 lb. The weight of Angelfish depends upon their species and body length.

There is not any specific name of male and female species.

What would you call a baby Angelfish?

Baby angelfish, also known as fry, live inside the eggs for a while after hatching, feeding on the remaining yolk in the egg sac. Angelfish fry grow to be free-swimming shortly after detaching from their eggs when they take their nutrients from water and plants.

Some species in the cichlid family are known for their aggressive nature, but angelfish are not usually violent. Angelfish are a pretty stable breed, so they do well in a tank with other fish with the same disposition. Sometimes they can be aggressive toward one another, particularly when breeding season is on the rise. Sometimes these fish become aggressive due to establishing themselves at the highest rank in the tank. To reduce the aggressive behavior of fish, you have to ensure that the tank is not overcrowded and fish have been provided with adequate hiding places

Angelfish are rewarding species for hobbyists. Even though Angelfish can be difficult to care for, they aren't as difficult as some of their other cichlid relatives, such as the lesser-known discus fish. The Angelfish tank size is large and needs very clean water and appropriate food. The behavior of Angelfish is timid and gets scared easily by loud noises and sudden moves. Even though they have been called group fish, they can become quite aggressive if not held with the appropriate species. Angels are omnivorous, and will not hesitate to eat any smaller fish in their tanks.

One of the most interesting facts about Angelfish is it changes colors as it gets older. A young Angelfish’s blackish stripes may fade into yellow ones as they grow older. Nutrition, breeding, and health activities can also cause color changes.

Fun facts about Angelfish are that a female changes into a male at a certain point in her life, which is known as protogynous hermaphrodites.

Angelfish facts for kids include that the body shape of an Angelfish is thin and flat like a pancake. This facilitates them to slip through the narrow holes and crevices in coral reefs. This way they can escape a predator or access other plant life or algae for nourishment.

Also, Angelfish know their owner and may recall a human figure for months or years. Not just that, but Angelfish form a bond with their owners.

The Emperor Angelfish is one of the larger species at 15.8 in long. Adults are easy to recognize because of their vibrant blueish and yellow stripes.  Their diet is sponge and algae from on and around coral reefs.

The Queen Angelfish is sometimes also called the Blue Queen. It is a large species measuring 18 in long. They can be blue and yellow or blue in color. This fish's primary diet consists of sponges. It also consumes jellyfish.

The French Angelfish is black with yellow circles around its eyes. The habitat of this fish is coral reefs in the eastern region of the Caribbean. Like most of the species, sponges are the main diet of this fish.

Angelfish bred for their brownish-black and white hue are known as Koi Angelfish. The heads of certain fish may have golden color markings. Young people may have a reddish tint under their eyes, which fades as they get older. These are lovely Angelfish, and just like Koi, their shading and hues can differ. Depending on their mood Koi Angelfish change color. When they become stressed, the orange tone becomes darker. The Diet of  Koi Angelfish is a variety of foods including vegetables as well as meaty foods.

Regal Angelfish are saltwater aquarium fish for marine aquariums. This fish feeds primarily on sponges and tunicates in the wild. In the aquarium, these fish feed a varied diet. These fish will grow to be about 9.8 in long and have white and orange lines with blue and black edges.

The peppermint Angelfish is a relatively smaller fish of marine ray-finned fish. Its diet is little known but thought to be made up of worms, crustaceans, sponges, tunicates, and such.

The Pygmy Angelfish is also called the Cherubfish or Cherub Angelfish.The scales are dazzling sapphire-blue along with orange highlights. Plankton, sponge, and different types of filamentous marine algae are eaten by these Angelfish.

The Blue Angelfish may also be known as the Common Angelfish. It has an aqua coloration with a gold tint and yellow edges on the fins and scales. The adolescent Blue Angelfish has a yellowish-brown overall color and pale-blueish markings, which distinguishes it from the parent. These fish eat marine algae, Spirulina, mysis, superior-grade  Angelfish preparations, or frozen shrimps.

Having your own Angelfish

Angelfish may be kept in a group tank as long as tankmates of these fish aren't particularly competitive or fin nippers. High-speed-moving fishes can also frighten Angelfish and compete for food with them. In a 30-gallon aquarium, no more than one pair can be kept. Keeping many Angelfish necessitates specialized husbandry, large tanks, constant commitment, careful preparation, and a dash of chance. The Angelfish's territoriality necessitates the imposition of these criteria. It is best to keep no more than two Angelfish in a single tank.

We can put Boesemani Rainbow Fish, Corydoras Catfish, Dwarf Gourami, Zebra Loaches, and similar animals with the Angels. Angels prefer water with a pH between 6-7.5. Where the pH difference between both the bag and Angelfish tank water is higher than 0.4, susceptible fish are much more likely to struggle and possibly die as a result of the transition. These fish can survive for 10 years or more and tend to be housed in ponds of other fish of their genus. Angelfish can reach up to 6 in long and therefore should be stored in a tank no less than 20 gallons in size. As a result, Angelfish tanks should be large - the larger, the better.

These are tropical fish that flourish in warm water conditions, with temperatures between 75-82°F. Their water conditions are often acidic, with little to no salinity. Water conditions in which they live are swampy, with a fine sandy substrate and lots of aquatic vegetation and mosses for hiding.

Here at Kidadl, we have carefully created lots of interesting family-friendly animal facts for everyone to discover! Learn more about some other fish including rainbow cichlid, or electric blue Jack Dempsey.

You can even occupy yourself at home by drawing one on our angelfish coloring pages.