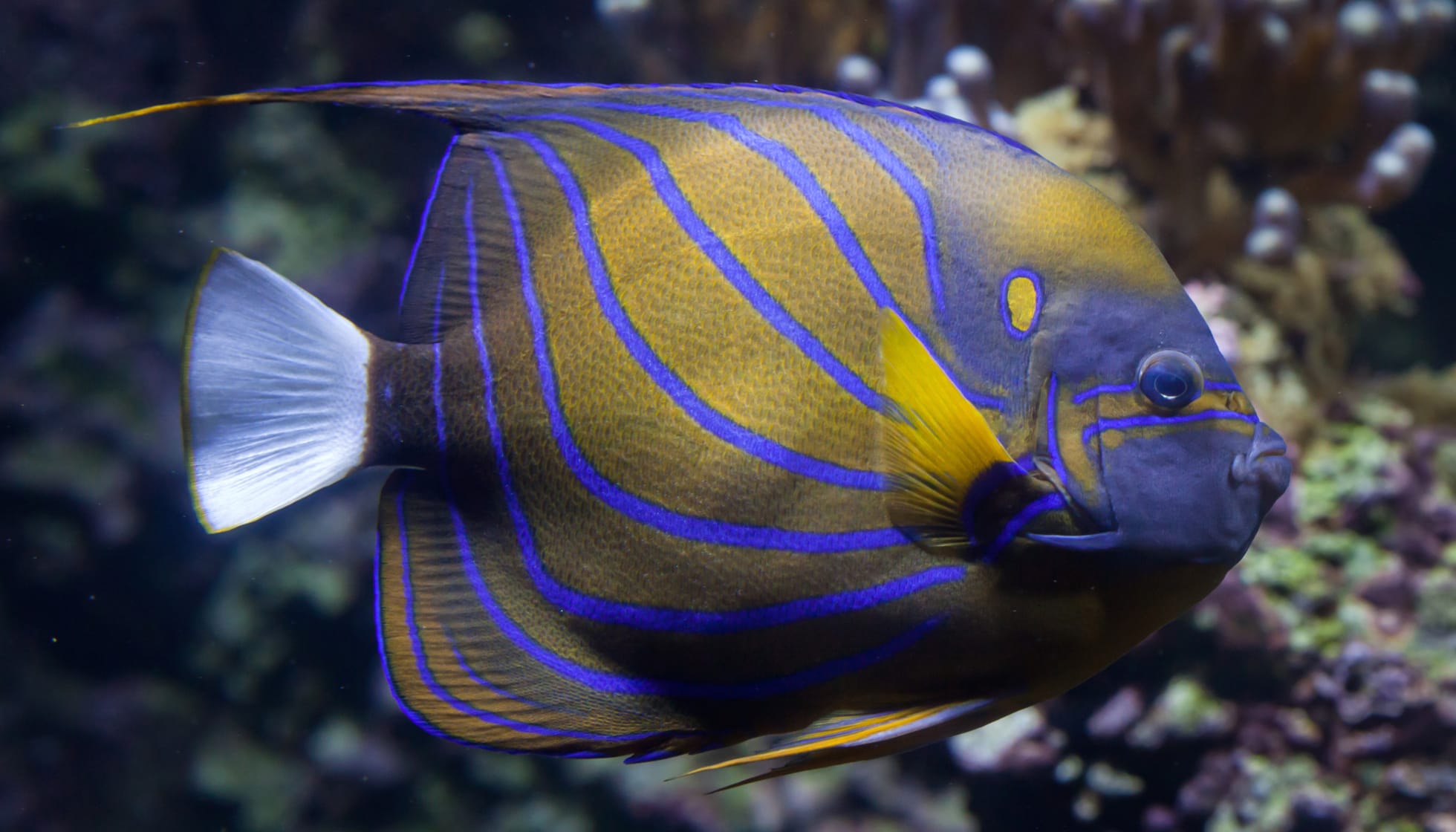 The blue ring angelfish is a colorful blue and yellow marine fish that originates in the Indo-Pacific oceans. Some places around which the annularis angelfish can be spotted include East Africa, New Guinea, and Japan. It has the scientific name Pomacanthus annularis, where the genus Pomacanthus states that this fish lives around marine coral reefs. The fish gets its name from the blue ring that can be seen above its operculum. It has a mostly orange or yellow body that is contrasted with bright blue stripes. Interestingly, the young fishes have contrasting white and blue stripes instead of the distinct lines noticed in the adults.

The beautiful look of the juveniles and the adults has made this fish a common aquarium pet. Sri Lanka plays a dominant part in raising this fish for the pet trade. However, people need to be very careful while keeping this fin in an aquarium as it requires a lot of space. This fish also has a habit of nibbling on things, including a live rock or corals placed in its environment. In the wild, it mainly eats coral polyps, filamentous algae, sponges, and marine invertebrates, but it can be fed with usual fish foods when kept in an aquarium. Keeping the annularis angelfish can be quite engrossing, especially for those who love bright and colorful fishes. Hence, keep reading to find spectacular blue ring angelfish facts.

Want to learn more about animals? Check out the articles on spiny dogfish and catfish to take a peek into the world of fish.

What type of animal is a blue ring angelfish?

What class of animal does a blue ring angelfish belong to?

The blue ring angelfish (P. annularis) belongs to the class Actinopterygii, and to the genus Pomacanthus.

How many blue ring angelfish are there in the world?

As a fish that is abundantly found in its natural habitat as well as in aquariums, it will be very hard to put an exact number to the population of this fish.

Where does a blue ring angelfish live?

The blue ring angelfish is native to the Indo-West Pacific oceans, which includes places like New Guinea, Sri Lanka, East Africa, north to southern Japan, around the Solomon Islands, Indonesia, and near the Philippines. It is also found in aquariums all over the world as it is a common part of the exotic pet trade.

What is a blue ring angelfish's habitat?

The annularis angelfish (Pomacanthus annularis) mainly inhabits coral reefs and rocky coastal areas. It is a marine fish; hence it does live in brackish water. The fish lives at an average depth of 9.8-98.4 ft (3-30 m), and the juveniles have a preference for shallow water. You can also spot the young fishes in more shallow in-shore areas, whereas the adults prefer to live in caves.

Who do blue ring angelfish live with?

Even though it is known that the annularis angelfish males do maintain harems where it controls multiple females, not much is known about its life apart from the breeding season. Nevertheless, it has been noted that the younger fish tend to live alone while the adult fish may prefer to live in pairs. When kept in an aquarium, it is important to keep an eye on this fish. The pomacanthus annularis blue angelfish is regarded as a semi-aggressive species that can bully other small fishes. It is crucial to find tank mates that are compatible with this fish. Refrain from placing it with other angelfish as it can soon turn into a fight. Some tank mates that it can live with include dottybacks, 6-line or 8-line wrasses, damselfish, lionfish, groupers, and soapfish. This fish should specifically be placed in a fish-only aquarium as it may nibble and attack shrimps or other invertebrates.

How long does a blue ring angelfish live?

The average lifespan of the Pomacanthus annularis blue angelfish is around 16-25 years when kept in captivity. Not much is known about the lifespan of these marine fishes when it is present in a wild habitat.

The blue ring angelfish young is born as a female, and it later changes into a male fish. This phenomenon is known as protogynous hermaphroditism or sequential hermaphroditism. These fishes reproduce through spawning, and fertilization takes place when the male and the female fishes release the eggs. It is believed that the annularis angelfish breeds in harems and the males are quite territorial. However, the male fishes will breed with one female at a time. The fish prefers to start spawning as the light grows dim, usually as dusk starts to fall. It takes about 15-24 hours for the eggs to hatch, and the young fish grow up on their own without parental care. Breeding the annularis angelfish is quite hard as these fishes do not like to mate in aquarium habitats.

Currently, the annularis angelfish (P. annularis) is listed as of Least Concern in the International Union for Conservation of Nature (IUCN) Red List.

If you look at the fish from the front, you will see two blue stripes that cross the eyes. These fishes have brush-like teeth that help in munching through sponges and coral polyps. An interesting thing about this fish is that the juvenile blue fish looks slightly different. Rather than having just blue lines, the juvenile blue-ringed angelfish has white stripes running down its black body. The caudal fin is also said to be transparent in juveniles, and it whitens as it grows up. During metamorphosis, the curved blue lines appear on the pelvic fins and back of the fish's head.

The colorful nature of the blue-ringed angelfish definitely makes it appealing and cute.

Not much is known about the communication habits of the blue ring angelfish, but the fishes are predominantly known for using tactile and chemical perceptions to get around the ocean. These fish are considered semi-aggressive in nature, and they can seriously bully small passive fishes.

How big is a blue ring angelfish?

As a medium-sized fish, the adult blue ring angelfish can reach an average size of 7.8-17.7 in (20-45 cm). The blue-ringed angelfish is often compared with the butterflyfish as it has a similar appearance, but the latter fish is smaller than the marine angelfish and attains a size of 4.7-8.7 in (12-22 cm).

How fast can a blue ring angelfish move?

A lot of studies are yet to be done about this particular fish; hence we don't know about the swimming speed of the blue ring angelfish.

How much does a blue ring angelfish weigh?

The exact weight of the blue ring angelfish isn't known, but we can assume that the medium-sized fish doesn't weigh much.

What would you call a baby blue ring angelfish?

Just like other fish babies, the baby of a blue ring angelfish is called a fry.

The blue ring angelfish diet mainly consists of invertebrates and coral polyps. It frequently feeds on other things like zooplankton, sponges, tunicates, and nektonic fishes. The fish also munch on filamentous algae in their natural habitat. When it comes to aquarium feeding, this fish will appreciate foods like brine shrimp, fish, or other common fish food. If you want to keep your fish happy, try to find food containing sponges as the blue ring angelfish likes to feed on this. These fishes will also eat Japanese nori or other vegetables when given in moderate quantities. The feeding schedule for adults is around two times a day, while juveniles should be fed more frequently.

No, the ringed angelfish is not a poisonous fish. Also, this isn't a fish that is eaten by anyone, rather it is kept as an aquarium pet.

Marcus Elieser Bloch, a German naturalist and physician, was the first to note the blue ring angelfish in 1795, and he called the fish, Chaetodon tricolor. This fish is also known as the blue king angelfish.

In the scientific name of the fish Pomacanthus annularis, and the term annularis stands for the blue ring present on the fish's gill cover or operculum.

The blue ring angelfish is not the tiniest of fish that you can have. As it is mainly found in the oceans, you need to give the fish ample space to move around. The ringed angelfish can be put in a tank with a space of a minimum of 70 gal (318.2 l) or more. We prefer a tank of at least 150-250 gal (681.9-1136.5 l) to give the fish an ample amount of space. You will need to add more gallons if you are looking forward to adding more fish. Refrain from adding any other angelfish to the mix, as it can get aggressive pretty soon.

The blue ring angelfish is found natively in coral reefs. However, that doesn't make the fish totally reef safe. While setting up a reef-based aquarium, you will need to make sure that the reef pieces are similar to ones found in their natural habitat. Also, there is a high chance that the fish may end up eating large coral polyps. The best coral to use with a blue ring angelfish is the small polyp stony corals, also known as the SPS corals.

You can even occupy yourself at home by coloring in one of our free printable blue ring angelfish coloring pages.