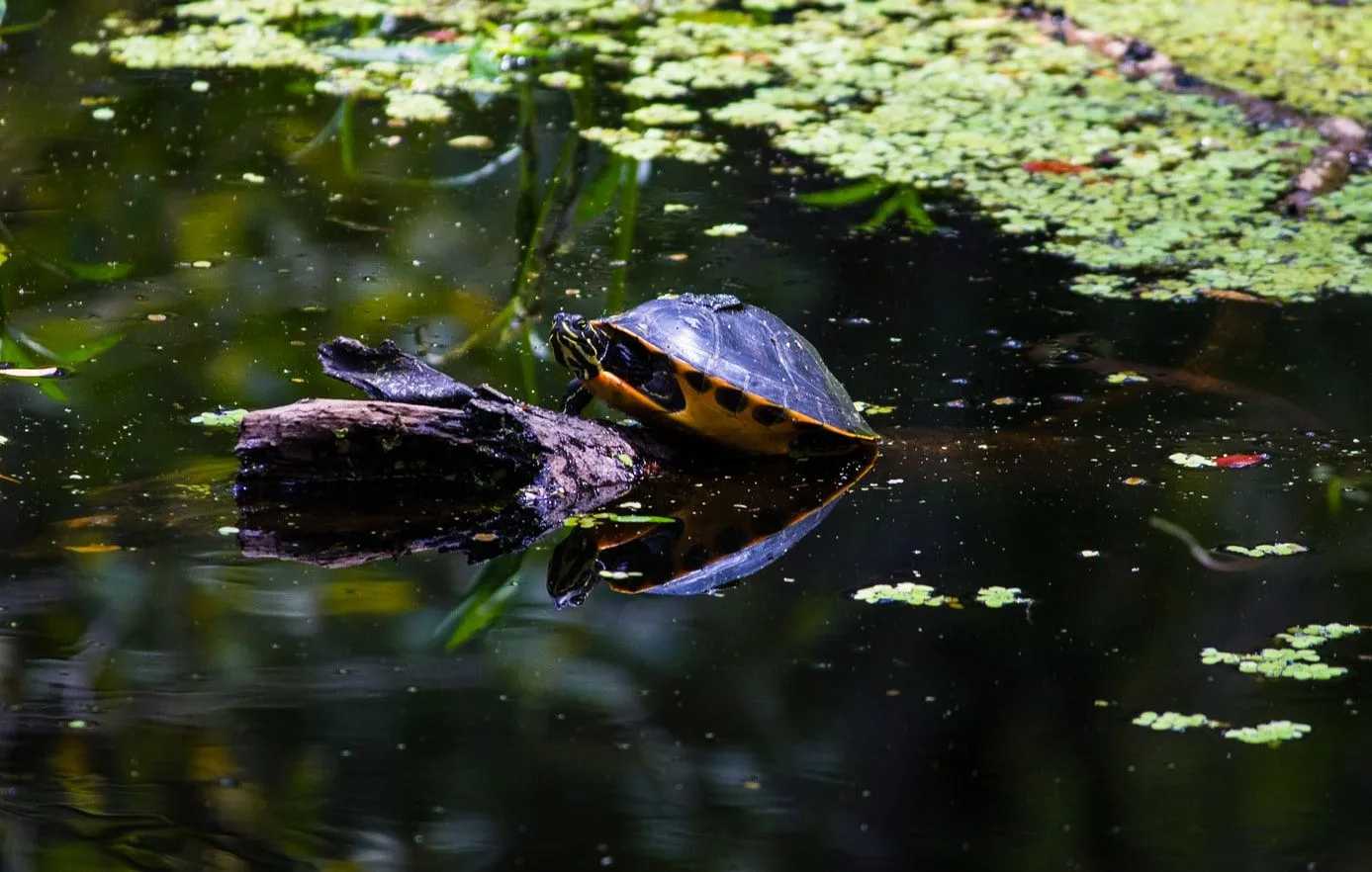 The suitable habitat for this smallest turtle is wet meadows, spring fed bogs, and wet pastures with soft muddy bottoms.

What type of animal is a bog turtle?

Bog turtle scientific name is Glyptemys muhlenbergii. It is a semi-aquatic turtle that can swim as well as walk. The bog turtle size is about 4.5 in, and it is, therefore, one of the smallest turtles to exist on the planet. It is endemic to North America and is considered a critically endangered animal as of now. Why is the bog turtle endangered? This is owed to the fact that these species of animals are very sensitive to any change in their environment. This has caused their northern population as well as southern population numbers to swindle. This is caused largely due to excessive changes in their habitat owing to pollution, changes in drainage patterns, among other such issues. Due to this, many people have risen their concern over the northern populations and southern populations of this animal which is largely endemic to the United States.

What class of animal does a bog turtle belong to?

A bog turtle is essentially a reptile that can be marked by its tendency of laying eggs over giving birth to young ones. Also, it has slimy and scaly skin. They have a dark carapace or upper shell, which has reddish or yellow shades. The males generally have a flatter carapace and a long thick tail. However, the females have a wider carapace along with a short, thin tail. Bog turtles are diurnal and do most of their work in the day, such as hunt and eat food. However, they don’t work during the hottest hours of the day or during colder mornings. This can be because of their habit of hibernating when cold arrives.

How many bog turtles are there in the world?

Bog turtles are critically endangered, and there are consistent efforts made for the conservation of bog turtles by the US Fish and Wildlife Service. There are about 2,500-10,000 bog turtles in the world, although the exact number is unknown as of now. The number of bog turtles has consistently decreased because of population, environmental factors, among other such problems. This has caused a lot of tension within the world since their population has now dwindled to a few thousand.

Where does a bog turtle live?

If a bog turtle is adopted or domesticated, it can be common to find it in a house with its owners. However, in the wildlife, a bog turtle lives in wet unpolluted regions. They are very concerned about their habitat because it is crucial to their lives. They are found in various wetlands, including north Carolina, north Jersey, Massachusetts, south and northwestern areas of Tennessee, western and south Carolina, Maryland, including other parts of the Eastern United States. This species is endemic to North America. Their population colonies are present around 250 miles apart and are known as northern population and southern population.

What is a bog turtle's habitat?

Bog turtles often aim at open meadows fenced by wooded areas and water. They are found in many marshes, sphagnum bogs, wet pastures, mushy meadows, and shrub wetlands, among other such wetlands. They tend to live in calcareous wetlands, areas that are rich in quick lime, calcium carbonate, and/or calcium. In Connecticut, United States, these species are found in the western parts of the state in scattered colonies near water sources. For their habitat, bog turtles strive on humid areas that have abundant grass or sphagnum moss around the forest floor. It is also important that those areas also have abundant sunlight so that the bog turtles can get their much-needed sunlight and raise their body temperature in such habitats.

Who do bog turtles live with?

Bog turtles can live alone or live in groups of about 20 turtles in areas where water is adequate. They are native to the eastern parts of the United States and can be solitary at times. If they are domesticated, bog turtles can also live with their owners. Then, they would live in houses where they are taken care of. With their low population rates, it is unlikely that anyone would now be allowed to be kept as pets in Eastern United States as well as other regions in the country.

How long does a bog turtle live?

Lifespan of the bog turtle range between 20-30 years of age. However, if left in its natural habitat, it can live for up to 50 years. Their age can be highly affected by their habitat because their habitat affects their lives highly. Without proper habitat conditions, they can get ill and also die. Increased vegetation changes, pollution, or altered drainage can highly affect the longevity of the bog turtle since they rely a lot on that. This also owes to why they are critically endangered species and why their population rates have reduced so much in the past few years that their existence has been threatened.

The bog turtles gain sexual maturity between 9-15 years of age. They generally start mating in the early spring, after they come out of hibernation from the waters. After breeding season, the female digs a nest and lays its eggs in the sphagnum moss. A female bog turtle can lay from one to six eggs in one breeding season laying about 40 eggs in her lifetime. The eggs are laid in sphagnum moss or tussocks or the sunny areas of the bog. These nests are often attacked by the skunks and raccoons who hunt bog turtles and their eggs.

The bog turtle species is critically endangered as the population has dwindled tremendously over the last few years. This problem has affected the northern population as well as the southern populations. The threatened status is because of their depleting habitat due to human activities. The bog turtles are excessively dependent on their habitat, and any change in it can reduce their life expectancy and kill them. There is also hunting of bog turtles by many humans which, although illegal, has caused a lot of deaths of the bog turtles over the years. The US Fish and Wildlife Service had listed these animals as threatened in 1997. Since then there are efforts have been made towards the conservation of these species of animals and to move them out of the threatened category.

The bog turtle has a dark brown shell and skin with bright yellow or orange spots on the sides of their head. These spots set them apart from others of their species and make them look different and easily identifiable. In addition to this, their upper shell or carapace is rectangular and domed. It tapers near the head and gets broader as the tail is approached. The carapace has easily identifiable scales as well. There is either a yellow or orange blotch present on each side of its head. With their small size and their appearance, the bog turtle can appear to be very cute. This is one of the reasons why it is considered a great pet option. In addition to this, Bog turtles also have a very cute appearance. This can be added on by the fact that they can fit the palm of your hand and are one of the smallest turtles. This is also why many people admire the bog turtle for its cuteness.

The bog turtle usually communicates through scent and low voices. The big turtles don’t get aggressive or loud.

How big is a bog turtle?

A bog turtle is a very small species and is one of the smallest turtles. It is about five percent the length of a small leatherback sea turtle. They are so small that they can even fit the palm of your hand easily.

How fast can a bog turtle swim?

Bog turtles spend quite a part of their life in water since they are semiaquatic species. However, the bog turtle doesn’t know how to swim well. The bog turtle can only swim for a short duration and usually do so when they have to hibernate in the winters.

How much does a bog turtle weigh?

The bog turtle is the smallest turtle species. If you’re wondering about the bog turtle size, you will be shocked. They weigh only about 110 grams on average, which is very little for a turtle.

What would you call a baby bog turtle?

Bog turtles are large omnivores and eat things like insects, worms, frogs, snakes, berries, seeds, slugs and snails. Animals like foxes, raccoons, and skunks are the predators of an adult bog turtle. Raccoons and skunks are also known to visit the nests of bog turtles and feed on them. Since the hatchlings of the bog turtles are only about one inch long, they are preyed on by many other mammals and birds as well.

The bog turtle is not very aggressive in general but they are very territorial and that can be a case when they get violent. When a male turtle watches another male turtle enter its territory, it gets very violent and tends to attack and gets therefore aggressive towards the intruder.

The bog turtle is a small and intelligent species, they can become great pets. Due to their endangered status, it wouldn't be ideal to keep them as pets. Their habitats are being destroyed due to human activity so therefore it would be best to protect their environment.

What do bog turtles do in winter?

Bog turtles are known to hibernate in water during colder periods. They bury quickly into the waters and then bury themselves there. They can dig up to 6-18 in of mud to hibernate.

What size are bog turtles when born?

Although the size of bog turtles is extremely small when they grow up, the baby bog turtles are about one in or 2.5 cm big when they first hatch. As compared to their adult size, it is relatively bigger.

Here at Kidadl, we have carefully created lots of interesting family-friendly animal facts for everyone to discover! You can even occupy yourself at home by drawing one on our Bog turtle coloring pages.