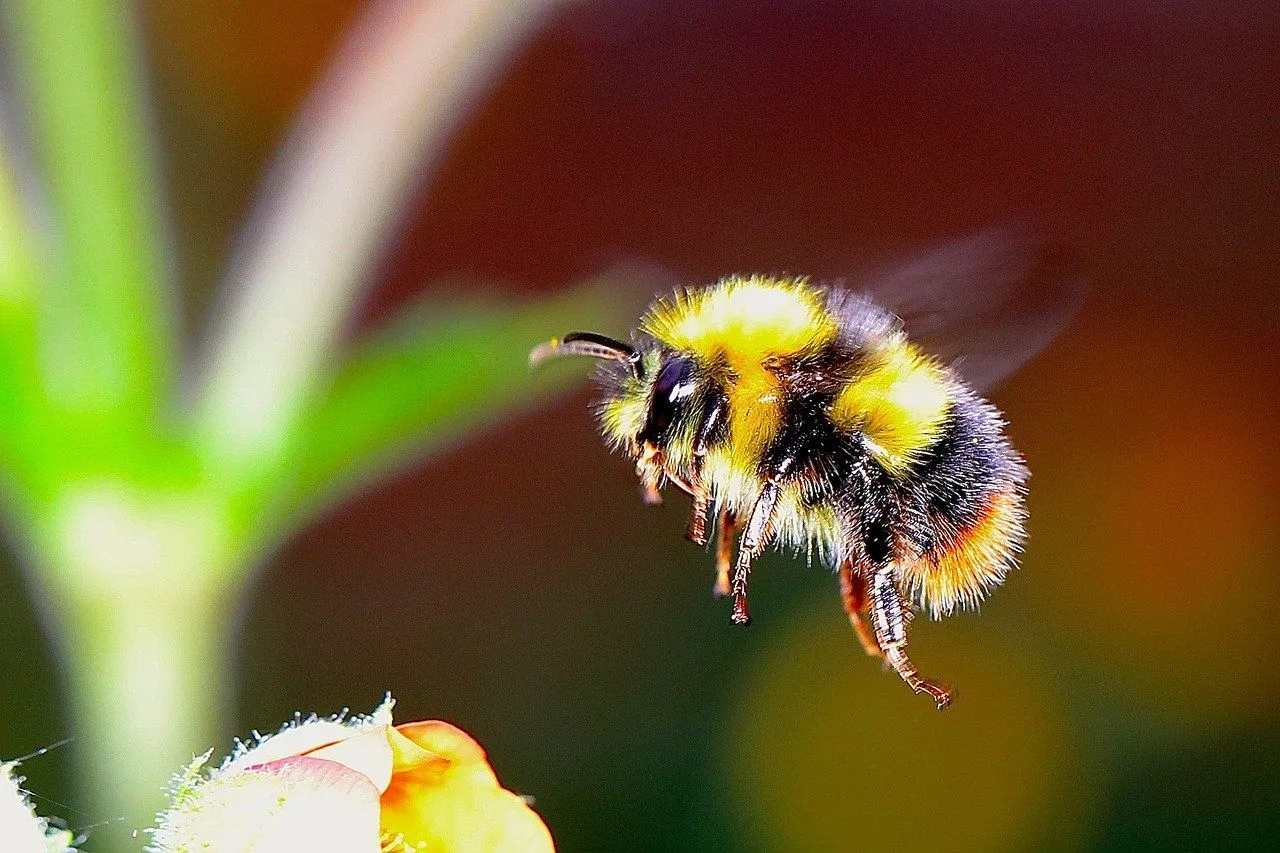 Bumblebees are bees from the Apidae family that belongs to the Bombus genus (honey producer bees). Bumblebees are distributed in 250 different species and are found worldwide. These bees can survive cold climatic conditions like in winter, unlike other bees who can only survive the summer season. Their bodies regulate temperature while the long and strong bristles help prevent heat loss from their bodies, hence keeping them warm during winters. Bumblebees can absorb solar radiation by a shivering method, raising their body temperature and thus efficiently serving the purpose during harsh winters.

Here on our page, we have lots of amazing facts about the bumblebee that everyone will enjoy. Let's look at these interesting facts and if you like these, do also read our stingless bees facts and solitary bees facts.

What type of animal is a bumblebee?

A bumblebee is an insect species that belongs to the category of bees, specifically the Bombus bee.

What class of animal does a bumblebee belong to?

Bumblebees are of the Arthropod phylum that belongs to the class of Insecta.

How many bumblebees are there in the world?

Where does a bumblebee live?

Bumblebees can be found in any area where the availability of nectar and pollen from flowers is not an issue. This includes areas rich with flowers like gardens, meadows, and woodlands. Urban and suburban settings are places best suited for them as they are conducive and helps them build nests easily. Bumblebees are native to California but can be found all over America, Canada, Europe, and Asia. New Zealand hosts four species of Bumblebees.

What is a bumblebee's habitat?

As there are approximately around 250 different species of Bumblebees, it may not be a surprising fact that they can be spotted just about anywhere in the world. Their habitats range from the United States to Europe and everywhere that they can get pollen and nectar from flowers. Bumblebees prefer to build their nest closer to the ground under abandoned woods, trees, and plants.

Who does bumblebee live with?

Bumblebees are social organisms and hence prefer living in a group also called a colony. The queen bee lays eggs, while males (often called 'the drones') and worker bees look after the nests and take care of the young ones. They are not honey-producer bees and often reside in the colonies of the much smaller honeybees or other species of bees. Queens are known to take over other colonies by killing the queens of that colony and then laying eggs there.

How long does a bumblebee live?

Bumblebee's lifespan depends upon many factors. While worker bees tend to live up to 12-28 days, male bees die shortly after mating. The queen bee lives for a good 18-19 weeks, but a queen bee is also known to live longer, up to 24 weeks to build a nest and take care of her eggs until the colony's demise.

In the months of summer (specifically in July and August), young queen bees mate with male drones, and after fertilization, the queen builds her nest and then lays the eggs. Most of bumblebees build their nests underground so they can be safe from predators as well as excessive heat. The queen and the female workers look after eggs in the nest, which later hatch into larvae. Worker bees guard the nest and continue building the colony for their safety.

Bumblebees have the status of Least Concern. A study shows that although the body of bumblebees is made in such a way that they can survive cold weather, they are not completely immune to the harsh winter conditions of December. During this time of the year, their egg tends to freeze due to the severely dropping temperature. This is the main reason why the queen hibernates hidden in their underground nest.

Bumblebees are fuzzy and large black bees with yellow bands all across their body. These bees have short, stubby wings and are often larger than the average honey bee. They have short and soft fur on their body that is attached to a plump head. They are different from honey bees as they have bigger tongues, making it easier for them to release nectar from a flower, which they suck out of what appears to be a closed tube. On the other hand, the honey bee can only take nectar from an open flower. Most people tend to like bees due to their appearance and their tiny size, and same is the case with bumblebees. A recent study shows that the sting of a bumblebee is quite dangerous and painful, which can also lead people to avoid them. Bumblebees can sting aggressively and repeatedly, although they tend to ignore humans.

How big is a bumblebee?

Adult bumblebees can range up to 1.6 in (40 mm) in length. This bee is ten times smaller than an average to medium-sized bird and about half the size of the bumblebee hummingbird.

How fast can a bumblebee fly?

Bumblebees can fly up to 3.3 yards per second which means this bee can cover the length of an entire football field in around 29-33 seconds.

How much does a bumblebee weigh?

The weight of bumblebees can range around 0.03 oz (0.85g). These bees are agile and tiny insects with short wings.

There are no different names for male and female members of the bumblebee species.

What would you call a baby bumblebee?

Baby bumblebees are called larvae or pupae when young. The bumblebee undergoes three different stages before it becomes an adult bee. The transformation from an egg into larvae, and after that into pupae, and finally into an adult bumblebee takes about three weeks.

The primary food for bumblebees is pollen and nectar from flowers. These bees feed on nectars and take their pick from flowers across the world. They have large tongues, which makes it easier for them to suck nectar and pick pollen from a closed flower bud.

Although the common bumblebee is not an aggressive insect by nature, the female can sting when she feels threatened. They are generally friendly and docile. The male bumblebee cannot sting, and only the female can, doing so when threatened. Although their sting is not fatal, it sure is excruciatingly painful, albeit a rare occurrence for humans. They cannot kill you unless you are allergic to the bee's venom. You can treat a bumblebee sting by first scraping off the stinger, sanitizing the affected area, and then promptly applying a cold compress to ease the pain.

The bumblebee cannot be a good pet to a human being as these creatures reside in groups or colonies that cannot live alone, and if indeed planning on bringing home a hive, they need to be handled by expert hands. However, if you'd like to watch a bumblebee in action, it is quite okay to watch them feed on the nectar of flowers from a safe distance and with possible protective suits or clothing. Remember that the bumblebee's sting can be very painful and should be avoided at all possible costs.

Driven solely by a queen bee, bumblebees are all about cultivating discipline, order, and loyalty. They collaborate in raising their young and split work equally.

Bumblebees are equipped to secrete and deliver a waxy substance to construct their colonies in the best way possible and ensure the safety of all eggs while at it.

There is also a sci-fi action film based on the idea of a bumblebee titled 'Bumblebee' about a giant alien robot named Bumblebee due to his resemblance to the actual insect. Charlie Watson is the human protagonist of this film. Bumblebee's real name was B-127.

Bumblebees cannot and do not make honey. The bumblebee collects nectar from all flowering plants but does not convert it into honey like its honeybee cousins.

How does a bumblebee fly?

Although the bumblebee has small wings, their wings beat very fast, roughly 200 flaps per second. This brilliant maneuver helps them fly as fast as birds. The bumblebee can take flight at high speeds even while carrying an object along.

Here at Kidadl, we have carefully created lots of interesting family-friendly animal facts for everyone to discover! For more relatable content, check out these scorpion facts and hornet facts.

You can even occupy yourself at home by coloring in one of our free printable bumblebee coloring pages.