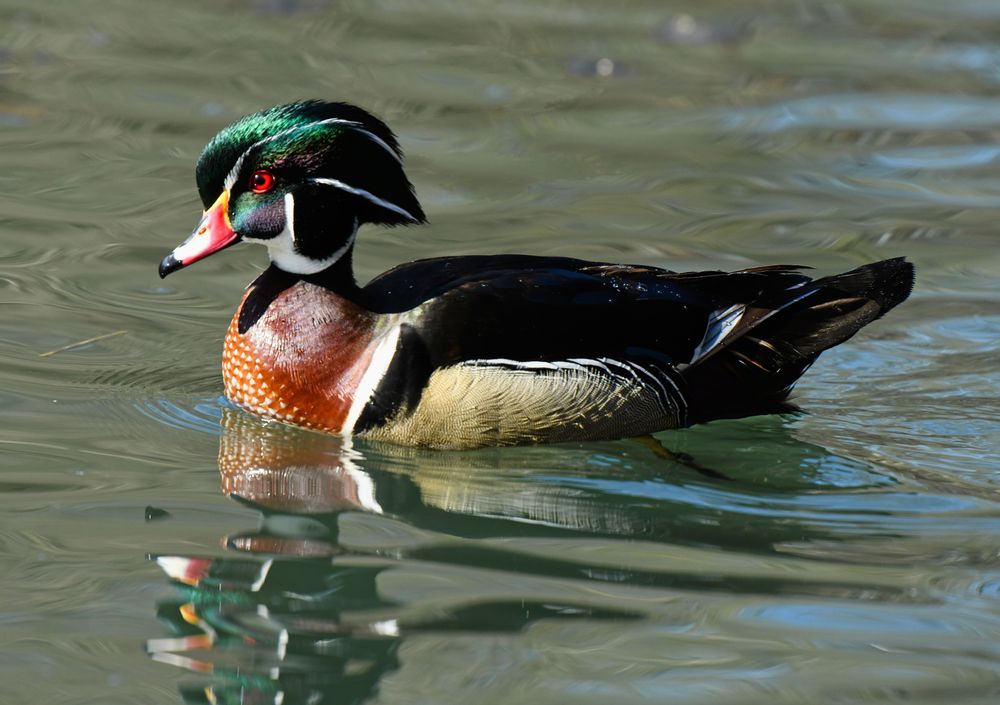 Do you find ducks fascinating? Here we have all the information on Carolina wood ducks. The Carolina wood duck (Aix sponsa) is a North American species of bird. They are also known as a wood duck or a Carolina duck. These ducks are one of the most beautiful species of waterfowl due to their colorful plumage. These birds can mainly be seen in parts of North America. They are migratory, but they don't leave the continent even when migrating. You can easily differentiate a male from a female due to the difference in their plumage. They can mostly be seen around water bodies covered with vegetation or downed trees, like alder or willow trees. Carolina wood ducks feed on various aquatic and terrestrial seeds and insects. Many people hunt these beautiful ducks during the waterfowl season in fall or winter.

Read on to know about the nesting, feeding, breeding habits of Carolina wood ducks. If you like this article, then also check out the crested duck and ring-necked duck.

What type of animal is a Carolina wood duck?

The Carolina wood duck (Aix sponsa) is a species of duck.

What class of animal does a Carolina wood duck belong to?

The Carolina duck belongs to the class Aves of animals, just like the muscovy duck.

How many Carolina wood ducks are there in the world?

Where does a Carolina wood duck live?

Carolina wood ducks are seen in many parts of North America. Most of these birds can be seen around southern parts of Florida, North Carolina, Texas, Cuba, the Gulf of Mexico, and Manitoba east of Nova Scotia. A small Pacific coast population can be seen breeding from California, United States to British Columbia, Canada. These ducks are known to be partially migratory. The population living in the northern parts of their habitat range moves to the southern parts extending to Mexico in the winter.

What is a Carolina wood duck's habitat?

The primary habitats of these birds are lowland wooded swamps, forests, beaver ponds, and freshwater marshes. They can also be found in all kinds of water bodies, from rivers to creeks. These ducks prefer water bodies covered with shrubs and downed trees like willow trees or alder trees, and other aquatic vegetation.

Who does a Carolina wood duck live with?

How long does a Carolina wood duck live?

The general lifespan of these North American ducks falls within 3-15 years of age.

The breeding season of this bird occurs from late summer to winter. They have been seen to be monogamous or serially monogamous in nature. There are many ways the males and females behave to attract the opposite sex during courtship behavior. After copulation, the female bird lays about 6-15 eggs on average. There might be a second brood if the first brood was laid early in the breeding season or if the first brood was destroyed for some reason. The females only incubate the eggs for the next 25-37 days. The young ducklings leave the nest only 24 hours after hatching from the eggs. They start feeding themselves from then on. Only the female bird broods the young ducklings for about the next 14 days. The ducklings become fully independent at about 56-70 days of age.

The Carolina wood duck (Aix sponsa) is a small to medium-sized bird species. It is the most beautiful among all waterfowl species. These ducks can be spotted easily due to their colorful plumage and crested head. These ducks show conspicuous sexual dimorphism.

Male Carolina wood ducks are bright chestnut and green colored with beautiful patterns on almost all their feathers. The head of a male wood duck is glossy green and chestnut-colored with white stripes. They have a chestnut-colored breast and buffy flanks. The male has a bright red bill and eyes. When molting before the breeding season, the male wood duck loses its bold white stripes and pale sides.

Females are much less vibrant than male birds. The female wood duck has an overall grayish-brown plumage with white-colored speckled breasts. They have delicate patterns around the eyes and a white eye ring. The young ducklings look similar to females.

These North American ducks are extremely beautiful. They also typically display shy and reserved behavior, which adds to their charm.

How big is a Carolina wood duck?

How fast can a Carolina wood duck fly?

These ducks can take a smooth flight even through dense woodlands. They can reach a flight speed of about 31.7 mph (51 kph) when migrating.

How much does a Carolina wood duck weigh?

What would you call a baby Carolina wood duck?

A baby Carolina wood duck (Aix sponsa) is known as a duckling or hatchling.

These birds are omnivorous in nature. Their plant-based food consists of fruits and seeds. They eat seeds and acorns of smartweeds, maple, waterlily, ash, and elm. They also eat animals including beetles, flies, moths, and butterflies.

Carolina wood ducks are not known to be dangerous or aggressive towards humans or otherwise. They are a rather shy and reserved species of duck.

It's not known whether these ducks would make good pets or not because there are no records of these birds living as pets.

Many people consume Carolina wood ducks. They have described the taste of these ducks as similar to a prime rib.

The males accompany female Carolina wood ducks when selecting a cavity for their nest. A tree with an already available cavity is preferred by these ducks. The female selects a nest cavity near canopy openings and within 1.2 mi (2 km) of an open water source. The males wait for their partners nearby as the female examines the tree cavity for the Carolina wood duck nest. They have also been seen to choose nesting boxes.

How did the wood duck get its name?

The scientific name of Carolina wood ducks is Aix sponsa. The name in English means 'waterbird in a bridal dress'. They got this name due to their beautiful plumage. Their English name, Carolina wood duck, comes from their endemic geographic range as they can be seen in North Carolina. About 18 more species of ducks, like the ruddy duck, American wigeon, and mallard, can be seen in North Carolina.

Can wood ducks be domesticated?

Domesticating wood ducks is illegal and you would need federal or state permission to keep them. Even if you do get permission, domesticating them is not easy. They require a secure and quiet surrounding with proper food and unlimited access to water.

Here at Kidadl, we have carefully created lots of interesting family-friendly animal facts for everyone to discover! Learn more about some other birds from our tinamou fun facts or wandering albatross fun facts for kids pages.

You can even occupy yourself at home by coloring in one of our free printable bird watching coloring pages.