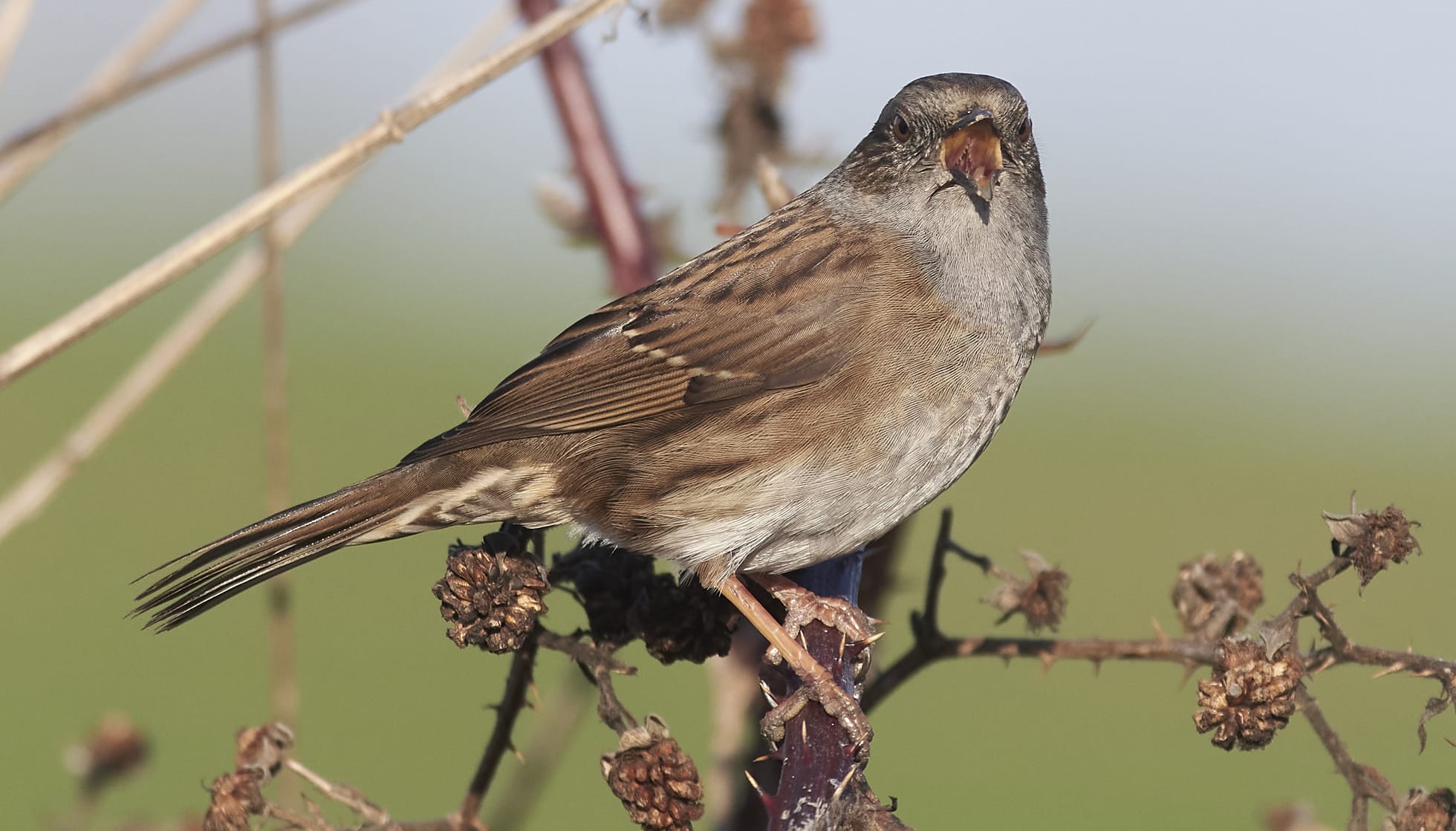 The dunnock is a species of small bird. Its other names are hedge sparrow, hedge accentor, and hedge warbler. It’s also known by its scientific name, Prunella modularis. Accentor is derived from Latin and means sing with another. The name dunnock is derived from Old English and means little brown. The dunnock’s streaky brown and grey feathers give it a dull appearance.

This species is usually seen alone or in pairs. It has a quick, shuffling walk and it often flicks its wings as it walks. The dunnock is a territorial bird. If two males find themselves in the same territory, they can become quite agitated. The distribution of this species is widespread across Europe. Dunnocks are a very common British garden bird, and can also be seen in woodland or scrubby areas. They’re also found in some Asian and Middle Eastern countries.

They can usually be seen near flower beds, bushes, hedges, or hedgerows in gardens and woodland. They can be a bit shy and prefer perches that are close to the ground or protected by undergrowth. They search the ground and plant cover for insects, spiders, worms, and seeds, which are their main food.

You may also check out the fact files on Boreal Chickadee and Sunbittern from Kidadl.

Deforestation And Predation By Sparrowhawks

What type of animal is a dunnock?

The dunnock (Prunella modularis), also called the hedge sparrow, is a species of a small bird. As its name suggests, it is a bird that is often found in hedgerows and shrubs across Europe and parts of Asia.

What class of animal does a dunnock belong to?

The dunnock belongs to the class Aves as it is a species of bird.

How many dunnocks are there in the world?

The International Union for Conservation of Nature (IUCN) Red List tracks extinction risk to different species of wildlife around the world. According to this list, the number of mature dunnocks in the world is between 25,000,000 and 43,999,999. Their number is decreasing.

Where does a dunnock live?

The dunnock usually lives in the woods. Females make their nests in bushes or small trees. The dunnock’s nest is bulky and shaped like a cup. It is usually at a height of 59-78.7 in (1.5-2 m) off the ground. The nest is made using dry leaves, twigs, moss, and other bits of plants. To keep their chicks warm, they line the inside of the nest with moss, feathers, and fur.

What is a dunnock's habitat?

The dunnock can be found in bushes, hedges, or hedgerows in the woodland or shrubland. You may also see it in a garden or park, especially around March. It likes to move about under the safe cover provided by vegetation (this is why it is also called the hedge sparrow).

Who do dunnocks live with?

During the breeding season (April to July), the dunnock will search for a mate. But it doesn’t always mate in pairs. Female dunnocks can mate with more than one male at a time. So rather than living in pairs, dunnocks live in groups of three to four with shared territories. All the males of a group help with feeding the baby birds. The rest of the year, dunnocks spend most of their time alone.

How long does a dunnock live?

The life span of the dunnock is around two years.

Dunnocks reproduce by laying eggs during the breeding season.

The total number of dunnocks in the world is still quite large, but a decline has been noted in the British population. Deforestation and reduced farmland are taking away the dunnocks’ habitat. However, they are not considered to be Endangered at this time. Their conservation status is Least Concern.

Dunnocks have brown feathers, with a grey head and breast. The sides of the head are blue and gray. The back is streaked. They have a thin bill and orange legs. They often flick their wings and tail as they walk. With similar size and coloring, sparrows and dunnocks can be easily confused. Both are frequent visitors to gardens and parks.

While male and female sparrows have different markings, male and female dunnocks look the same. The male house sparrow has a thick bill and a black bib. It has a brown head with a grey crown. The female house sparrow also has a relatively thick bill, pale brown crown, and no bib. The sparrow’s legs are a pale flesh color. Unlike sparrows, the dunnock’s head and breast are blueish gray in color. Its thinner bill and orange legs also distinguish it from the sparrow.

Despite its drab coloring, the little dunnock is a very cute and pretty bird. Its song is quite bright and buoyant and can enliven any garden.

Modularis in the dunnock’s scientific name, Prunella modularis, is derived from the Latin modulari, which means “to sing”. Dunnocks communicate mainly through vocal calls. The alarm call of the dunnock sounds like a loud tseep. They make a different sound when in flight, which sounds more like a 'ti-ti-ti-ti'. The dunnock song is high pitched and loud and can be described as a squeaky warble. They will often sing this song from their perch in an open space in a garden or woodland.

When they need to defend their territory from other males, dunnocks will often flick their wings and get very excited. Male dunnocks might also fight with each other to establish their dominance within the group.

How big is a dunnock?

How fast can a dunnock fly?

There is no recorded speed for how fast a dunnock can fly.

How much does a dunnock weigh?

What would you call a baby dunnock?

A baby dunnock is called a chick.

During spring, which is their breeding season, dunnocks mainly eat spiders, worms, and caterpillars. You can see them on the ground or low branches, going in search of food among the leaves and roots of bushes and hedgerows in gardens. In the autumn and winter, they mostly eat seeds and berries. The search for food in winter is often harder and starvation is a real threat. Bird feeders set up in low, shaded areas of gardens can be a helpful source of food for dunnocks in the winter months.

No, dunnocks are small and quite harmless to all except the insects which they consider food.

Dunnocks are wild birds. In the United Kingdom where they are commonly found, wild birds, their eggs, and their nests are protected by law. You should not keep such a bird indoors or damage its nest or habitat in any way. Other countries may have different laws for wildlife than the British. But in general, wild birds and their chicks will probably not have a good life if they are removed from their natural habitat and family.

However, you can set up a bird feeder or watering station in your garden to attract more garden birds including the dunnock. By regularly topping up the bird feeder with fresh food, you can encourage the dunnock to visit often and make its nest close by. In this way, dunnocks can keep their freedom and also become your wild pets.

Dunnocks are famous for their odd breeding habits.

The dunnock population tends to have more males than females. These birds are known for mating in groups and sharing territories. This allows each male to have a chance at producing offspring.

Is a dunnock the same as a hedge sparrow?

Yes, hedge sparrow is another name for the dunnock.

How many broods do dunnocks have?

Female dunnocks can lay two or three broods in a year. Each brood has three to five blue eggs. Eggs need to be incubated for 12-13 days, after which the chicks are born, covered in black down. Male and female dunnocks will jointly take care of the chicks until they grow up.

Here at Kidadl, we have carefully created lots of interesting family friendly animal facts for everyone to discover! For more relatable content, check out these laysan albatross facts and king eider facts pages.

You can even occupy yourself at home by coloring in one of our Dunnock coloring pages.