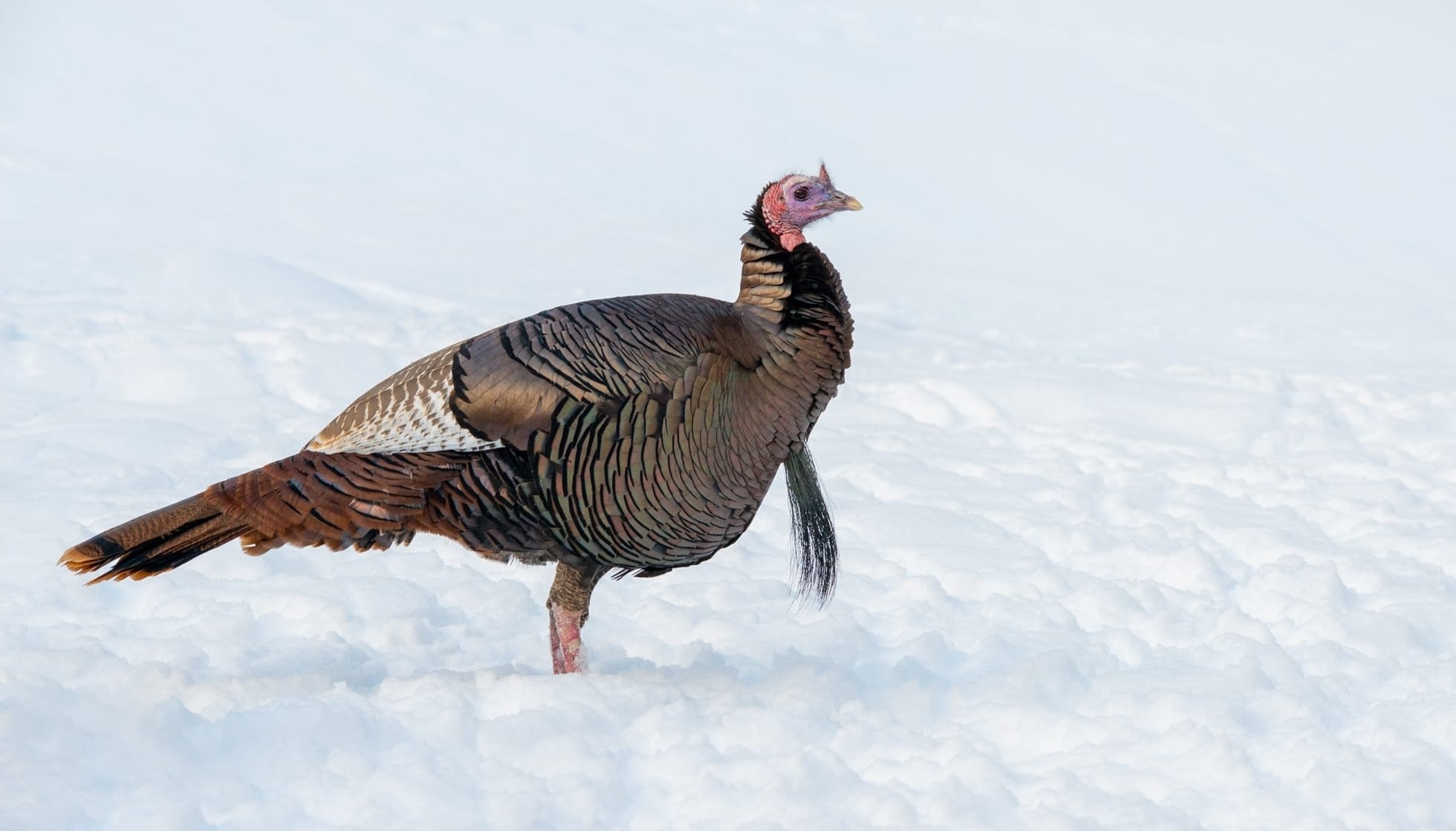 Wild turkeys are commonly found in the eastern United States, Southern Canada, and Central Mexico. Their habitat includes places like fields and orchards. They have dark plumage with brown stripes over the black flight feathers and a short, round tail.

Here, we have many amazing and interesting facts about eastern wild turkey that you will enjoy. Let's take a look at these facts and information and do read our wild turkey and turkey facts.

What type of animal is an eastern wild turkey?

A wild turkey (Meleagris gallopavo) belongs to a species of turkey that is commonly found in North America.

What class of animal does an eastern wild turkey belong to?

Wild turkeys belong to the class Aves. They are a species of wild birds found in the pastures and fields of the eastern United States, where plenty of insects and fruits are available.

How many eastern wild turkeys are there in the world?

Wild turkeys have an estimated population of 6.9 million individuals, and as per the IUCN Red List reports, they are at Least Concern, and their population is still increasing.

Where does an eastern wild turkey live?

What is an eastern wild turkey's habitat?

The eastern wild turkey habitat contains places like pastures, fields, orchards, and seasonal marshes where plenty of food is available to fulfill their diet. They also find them in hardwood and mixed conifer-hardwood forests, where plenty of insects are available for their foraging.

Who do eastern wild turkeys live with?

A wild turkey is a social animal that lives in groups or pairs. They often assemble in large groups in a small area to forage seeds. During the winter, they form bands, and each band has some dominant hierarchies. Bands protect their territories from other bands.

How long does an eastern wild turkey live?

Even though the average life span of a wild tukey is said to be one to two years, there are instances where they have lived more than that. The oldest eastern wild turkey lifespan was 13 years. So we can say that they can live up to 13 years but that depends on its surrounding factors.

Male turkeys often try to attract hens by gobbling and strutting with their tail feathers fanned out, wings lowered and dragging on the ground, erected back feathers, and their head was thrown back with an inflated crop. These gobbles are so loud that they can be heard from 1 mi (1.5 km) away.

The Southern wild turkey's breeding season occurs in late January, and the northern ones' breeding season comes in late February. They reproduce one brood per season and lays 4-17 eggs. The incubation period lasts for 25-31 days, and the poults born are precocial, so they can walk freely and feed themselves within 24 hours of hatching. Male turkeys do not help the female in taking care of the young poults.

Hens build their nest in shallow depressions on the ground covered by dense brush, vines, tangles, deep grass, or fallen treetops. The female scratches the nest area then lays the eggs in the same nest. They begin nesting from mid-April to June.

A wild turkey has the status of Least Concern. This is because they are a stable species of birds whose range is spread all across Northern America. Their population is 6.9 million and does not face any grave danger or threat. According to the reports made by IUCN Red List, their numbers are still increasing, so there is nothing to worry about their population.

The eastern wild turkey tom has a dark plumage with brown stripes over the black flight feathers and is barred with white. A black-colored breast tuft and a hornlike snood, red wattle, and caruncles. It has long pinkish-gray or silver-gray legs, a long head and neck, and large fan-shaped tails. Its wings are small and round. It has tail feathers that have broad tips with rusty or white.

The heads of an adult male are red, blue, or white. It depends on the season, and it is larger than a female. Males typically have a beard, a tuft of coarse hair growing from the center of the breast, and the tail feathers are of the same length in adults, while tail feathers of young poults are different. The preen gland is also larger in toms compared to hens.

Wild turkeys may not look cute as their appearance is rather dull, and many people may find them scary too. Their hornlike snood, wattle, and caruncles give them a scary look. However, some people will find them cute and even keep them as pets just like white turkey.

Wild turkeys use various kinds of vocalizations to communicate with each other. Some of these eastern wild turkey sounds are 'clucks', 'putts', purrs, yelps, 'cutts', gobble, whines, cackles, and 'kee-kees'. Adult toms also make a drumming sound using the air present in their air sack, and they produce a special spit sound by creating a sharp expulsion of air from this air sack. At the same time, an adult eastern wild turkey hen will produce yelp to let gobblers know their location.

Adult toms also make gobbling and strutting motions with their tail fanned out, wings lowered and dragging on the ground, erected back feathers, and their head was thrown back with an inflated crop.

How big is an eastern wild turkey?

How fast can an eastern wild turkey run?

Wild turkeys are really fast runners as well as strong fliers. Despite being big and fat, they can achieve a flight speed of 55 mph (88.5 kph) and can run up to 35 mph (56.3 kph). During twilight, they fly off to the trees and roost well off the ground.

How much does an eastern wild turkey weigh?

The male wild turkeys are called toms or gobblers, while the females are called hens. A hen is usually smaller than the gobblers. Gobblers are about 39–49 in (99–124.4 cm) while hens are about 30-37 in (76.2-93.9 cm) long. Hens build the nest, incubate and raise poults on their own. Their nesting season begins in mid-April to mid-June.

What would you call a baby eastern wild turkey?

Wild turkeys are omnivores. Their food diet is made up of vegetables like acorns, nuts, seeds, buds, leaves, and fern fronds. Ground-dwelling insects like worms, amphibians, small snakes, and salamanders are also considered as their food. They forage in large groups in a small area to forage on seeds. They usually forage two to three hours after dawn and before dusk.

Wild turkeys have a dominant nature, but when humans provide them seeds or food, they become docile to them. Because of this fact, they lose their fear and start asserting dominance over humans and can cause damage. to prevent this behavior from developing, you shouldn't hesitate to scare or threaten a bold, aggressive turkey with loud noises, swatting with a broom, or water sprayed from a hose

Please check local laws and regulations regarding these animals as pets.

Eastern wild turkey hunting brings millions of dollars to the states' Natural Resources Department. These birds are loved and very popular for being game birds.

The feathers of hens are rather dull and are only available in shades of brown and gray, while males have a variety of colored feathers. Male eastern wild turkey feathers have areas of red, purple, green, copper, bronze, and gold iridescence. There are about 5000-6000 feathers on their body.

Males perform a ritual to attract hens; this ritual is called strutting. In this, they keep their tail feathers fanned out, wings lowered and dragging on the ground, back feathers erect, and their head thrust back with an inflated crop. This breeding begins in March and April, which is when turkeys are still flocked together in winter areas. The nesting season usually begins in mid-April to mid-June.

The Rio Grande wild turkey subspecies range from Texas to Oklahoma and Kansas.

During twilight, they fly off to the trees and roost well off the ground. Their ability to run fast and fly helps them in reaching the tops of trees or canopy present in a forest for roosting.

Benjamin Franklin wanted to have wild turkey as the national symbol instead of the bald eagle, but the bald eagle won the voting of the committee by only a single vote.

What is the world record eastern wild turkey?

How can you tell the difference between eastern and Osceola turkeys?

Here at Kidadl, we have carefully created lots of interesting family-friendly animal facts for everyone to discover! For more relatable content, check out these Nicobar pigeon facts and great grey owl facts for kids.

You can even occupy yourself at home by coloring in one of our free printable Eastern wild turkey coloring pages.