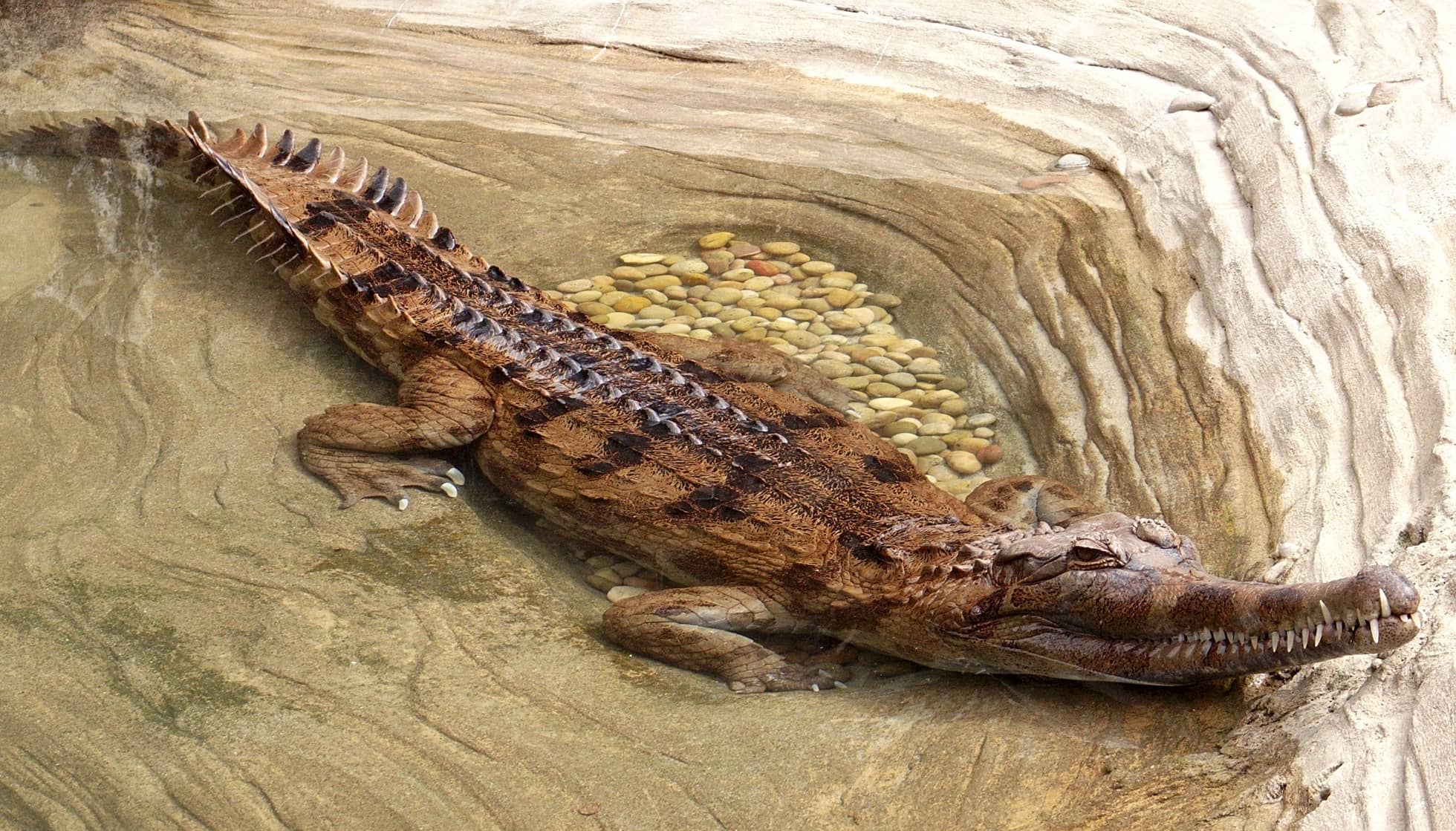 The False gharial is a freshwater crocodilian native to Southeast Asia, mainly Peninsular Malaysia, Sarawak, and Kalimantan, Sumatra, and Borneo in Indonesia. The False gharial is also called Malayan gharial,  False gavial, and Sunda gharial. Malayan gharials are threatened with extinction throughout their range due to habitat loss. Also, the animal is hunted by humans for skin and meat, and the eggs are collected for consumption. The Malaysian and Indonesian governments have taken conservation steps to prevent the extinction of these reptiles in the wild.

Scroll down to know more exciting facts about False gharial vs gharial. If you would like to know more about other animals, consider reading our articles on the green anaconda and the caiman.

What type of animal is a False Gharial?

A False gharial is a crocodile-like reptile native to Peninsular Malaysia and Indonesia.

What class of animal does a False Gharial belong to?

False gharials belong to the reptiles class, and these are the freshwater crocodilians of the family, Gavialidae.

How many False Gharials are there in the world?

Where does a False Gharial live?

A Malayan gharial (Tomistoma schlegelii) lives in freshwater rivers, lakes, and swamps. It is found in Indonesia, Peninsular Malaysia, Sarawak and Brunei.

What is a False Gharial's habitat?

A Malayan gharial is found in different habitats throughout its range, including blackwater streams and rivers, lakes, lowland freshwater swamp forests, peat swamps, and flooded forests. Its preferred habitat is peat swamp with low elevation, high pH, and slow-moving muddy water. It is also found on the outer edges of rain forests near rivers and in secondary forest habitats defined by river channels and banks and a lack of peat mounds. This species prefers terrestrial areas for sunlight and also as a nest.

Who do False Gharials live with?

There is no information on the species with whom the False gharials prefer to co-habit. However, it is presumed that they live on their own.

How long does a False Gharial live?

An estimated lifespan of a Malayan gharial in the wild is 60-80 years, while the captive lifespan details are not available. It is presumed that the captive species have a shorter lifespan.

Very little information is available on the natural breeding behavior of Malayan gharials. The female Malayan gharial reaches sexual maturity once it grows 8.2-9.8 ft (2.5-3 m) long. The male approaches the female by swimming around it, accompanied by hitting with the tail. Then, the male climbs the female and wraps its tail around and under the female for mating. They prefer mating in the rainy season, and they are known to breed twice a year. From captive breeding initiatives, it is understood that abundant vegetation improves breeding as it provides better cover and nesting material for the females.

Malayan gharials are mound-nesting crocodilians. A month or more after mating, the females start building nests known as mounds. They construct the mounds on land under the shade of a tree near water using sand, peat, twigs, tree seeds, and dried leaves. Females usually lay eggs after one to two weeks after beginning to nest. Typically, the clutch size is 20-60 large eggs with a measurement of 3.7 in (9.4 cm) long, 2.4 in (6.1 cm) wide, and weighs around 0.34 lb (154 g). Usually, eggs are laid above the ground level, and the temperature in the nest is known to fluctuate between 26-32 degrees Celsius. After the eggs are laid, the females add more vegetation to the top of the nest to protect the eggs and hatchlings from the predators like mongooses, reptiles, wild pigs, wild dogs, monitor lizards, and humans before abandoning the nest. The hatching period of eggs is 90-115 days, and the hatchlings move independently after birth.

Malayan gharials are critically endangered species and are classified as Vulnerable on the International Union for Conservation of Nature (IUCN) Red List of Threatened Species.

Malayan gharials are dark reddish-brown on the upper body with black or brown spots and cross-bands on the back and tail. Juveniles resemble adults but with black spots on the sides of jaws, body, and tail. The Malayan gharial has the slimmest snout compared to the slender snout crocodile and freshwater crocodile. Its long and thin snout is filled with 76-84 sharp and pointed teeth, like a gharial, making it easy to prey on fish. However, unlike the gharial, the Malayan gharial's snout expands towards the base and is similar to true crocodiles.

Malayan gharials are not cute. They look scary.

Significantly less information is available on the mode of communication among the False gharials. Though most crocodilians use different calls to communicate with their species, such calls are not observed in False gharials, and they mate in silence. From their mating behavior, it is presumed that they communicate visually and by the sense of touch and smell. All crocodilians' tough outer skin possess extraordinary sense organs covering much of their body, including the tail, legs, head, and jaws. With these sense organs, they detect the change in pressure caused by the touch and the movement of prey in water. This sense will primarily help them for hunting in muddy water.

How big is a False Gharial?

False gharials can grow up to 16 ft (4.9 m) long. Generally, the measured length of males is reported to be in the range of 11 ft 10 in - 12 ft 10 in (3.6-3.9 m) while the females measure 10 ft 9 in (3.27 m). Like other crocodiles, males are longer and heavier than females. These species are considered the longest crocodilians in the family, Gavialidae, but are smaller than the saltwater crocodiles in the family, Crocodylidae, which usually grow up to 20 ft (6.1 m) long.

How fast can a False Gharial move?

How much does a False Gharial weigh?

Information on gender-specific names of this species is not available. Generally, you can call it a male gharial and a female gharial.

What would you call a baby False Gharial?

Usually, the baby gharial is referred to as young gharial or juvenile. Also, you can call it a hatchling, as the baby takes birth from the hatching of eggs.

Like a gharial, the False gharial is a carnivore and primarily prey on fish and small aquatic animals. However, its diet also includes crab-eating macaques, deer, wild pigs, dogs, otters, snakes, birds, turtles, and monitor lizards.

The False gharials are not venomous.

Do you think many people would like to domesticate a crocodile as a pet? The answer is no. Based on the habitat and diet preferences, we can firmly say that a False gharial cannot be domesticated in human habitats and is considered illegal as it is a critically endangered species.

Another interesting fact is that the false gharial skull is the longest of any existing crocodilian. It measures 33 in (83.8 cm) long, with its lower jaw measures up to 41 in (104.1 cm).

Malayan gharials are not aggressive and are not considered dangerous species. There is no recorded evidence to confirm that they attack and eat humans. However, the mugger crocodile, which shares the river systems with gharials, is known to attack humans, and there are chances of considering them as a false gharial attack.

There is no information on the basis of naming this species as False gharial, but it is interesting to know how this species has got the name gharial. When the male gharials reach sexual maturity, they develop round and significant bulging on the tip of their slender snout. This bulging resembles an earthen pot known as ghara and formed the basis of the species' common name, gharials.

False gharials differ from the common gharials in physical appearance and geographical locations. False gharial (Tomistoma schlegelii) is found in the river systems of Southeast Asia. The Gharial (scientific name, Gavialis gangeticus), also known as fish-eating crocodile, is found in river systems of the northern Indian subcontinent, like the Ganges in India, the Brahmaputra River in northeastern India and Bangladesh, the Irrawaddy River in Myanmar, and the Indus River in Pakistan. The False gharial grows smaller than a Gharial and differs in color, i.e. the False gharial is dark reddish-brown, while the gharial is olive-colored, but they both have a slender snout. One most important fact is that, unlike the gharials, the young Malayan gharials do not receive proper parental care.

Here at Kidadl, we have carefully created lots of interesting family-friendly animal facts for everyone to discover! Learn more about some other reptiles from our Aldabra giant tortoise facts, and Olive Ridley sea turtle fun facts pages.

You can even occupy yourself at home by coloring in one of our free printable false gharial coloring pages.