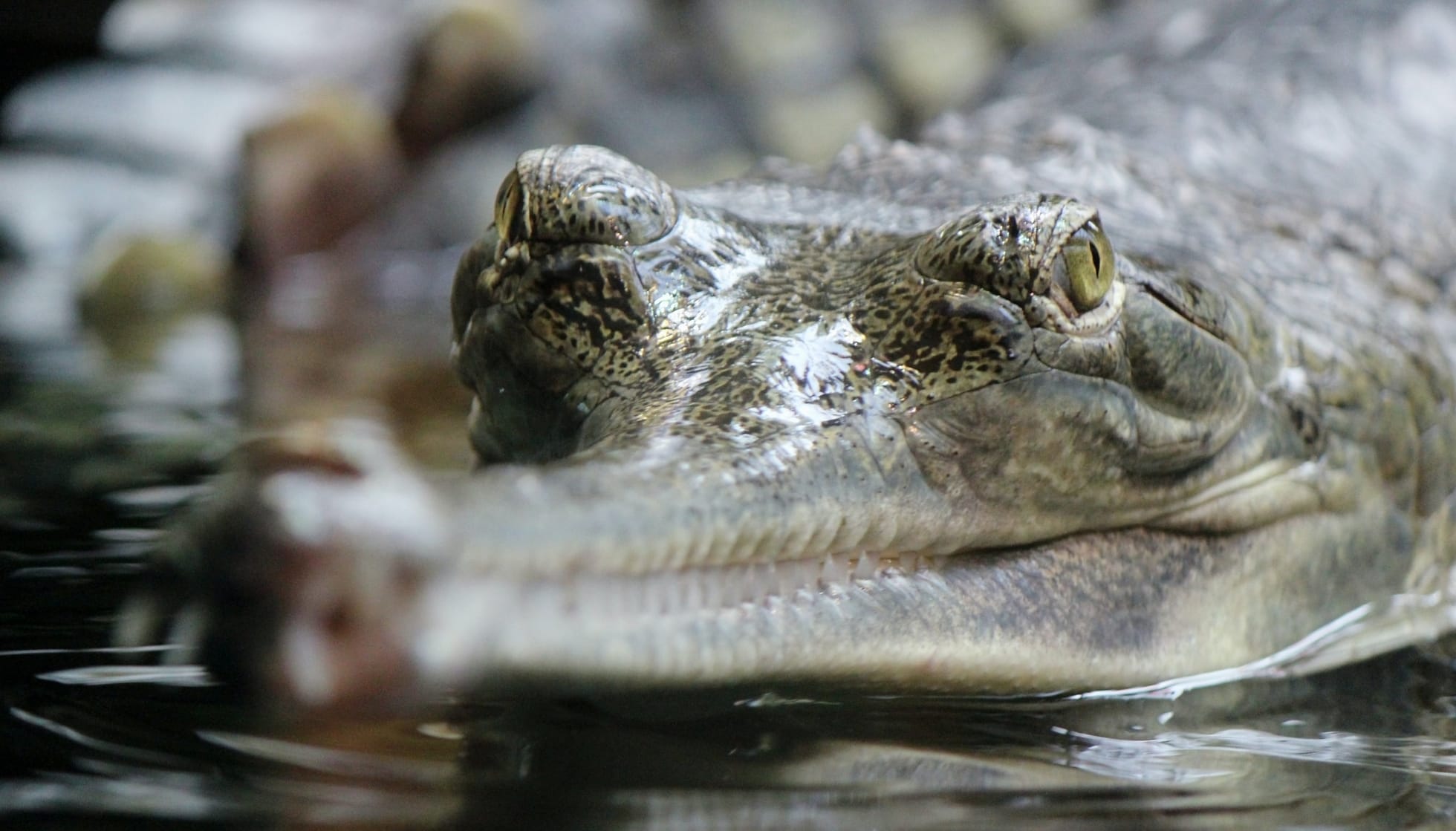 The gharial (Gavialis gangeticus) is an Asian crocodilian species belonging to family gavialidae and class reptilia.  They are distinguished from other Asian crocodiles by the presence of a long, thin snout. The name 'gharial' stems from 'ghara,' an Indian term that means 'pot' because the male gharials have a characteristic bulbous growth at the tip of their snout and it resembles the traditional Indian pot.

The gharial is one of the largest reptiles among all the crocodile kinds. The Indian gharial crocodile is believed to have evolved in the northern part of the Indian subcontinent and is found in freshwater river systems with swift-flowing currents. With a geographic range that historically covered Pakistan, India, Nepal, Bangladesh, and Myanmar, the gharial crocodiles diverged from other crocodilian species more than 40 million years ago.

The gharial is known to have shared a common ancestor with the false gharial (Tomistoma schlegelii) about 20 million years ago. The false gharials have slight differences with the Indian gharial, but they have the characteristic crocodile snouts and are mostly found in the waters of Indonesia, Malaysia, and Brunei.

Want to know more about these animals with long noses? Then read on for more of gharials' facts!

What type of animal is a gharial?

The gharial or the gavialis is a type of Asian crocodilian species. Gharial is the common name and the scientific name is Gavialis gangeticus. The adult gharials stand out due to their long snout. A distinction between the female gharials and male gharials can be made by the presence of a bulging growth on the tip of the male's snout called 'ghara.'

What class of animal does a gharial belong to?

Gharials are one of the many reptiles belonging to class reptilia.

How many gharials are there in the world?

The International Union for Conservation of Nature (IUCN) Red List categorizes the gharial as critically endangered and there are thought to be less than 250 of them remaining in the natural habitat. Extensive habitat loss and intrusive human activities have caused the gharial populations to witness a massive decline since the 1940s and to give them the status of a critically endangered species.

Where does a gharial live?

The Indian gharials are aquatic crocodilians known to live in clear, deep, and fast-flowing freshwater river systems with steep and sandy banks. Adult gharials can also be spotted in still and deep pools of water that form at river confluences and sharp river bends. They particularly prefer sandy banks for the purpose of breeding and basking. However, the young gharials differ in this respect because they are found in the rapidly flowing stretches of shallow water, mostly smaller streams or quiet backwaters. Since the gharials are not terrestrial animals, they hardly ever leave the water except for nesting and basking. In fact, they are often found to bask and nest on sandbars in the middle of rivers.

What is a gharial's habitat?

Historically, the Gavialis gangeticus has been known to primarily inhabit some of the major river systems of five countries: the Ganges (India and Nepal), the Indus (Pakistan), the Brahmaputra (India, Bangladesh, and Bhutan), the Mahanadi (India), and the Ayeyarwaddy (Myanmar). However, the gharials have become extinct from several areas where they were previously found and the surviving population is mostly confined to the water systems of two countries, along the Narayani river in Nepal and along the Son, Girwa, and Chambal rivers in India.

Who do gharials live with?

Gharials are not categorically solitary or social crocodilians. However, groups of gharials consisting of several females, an adult male, and subadults have been observed to congregate and bask together. Such groups are usually dominated by adult males. The usual basking months for groups of young, adult, and subadult gharials are December and January. Adult males and females are seen to confederate by mid-February. Besides, the gharials share common nesting grounds with the mugger crocodiles (Crocodylus palustris). While the gharials lay eggs on sandy soil near the water, the mugger crocodiles use the same ground but move farther away on rocks and steep embankments for building nests.

How long does a gharial live?

The exact lifespan of the gharials is not known. The only record of their longevity is that of a captive gharial at the London Zoo that lived for around 29 years. Besides, they are thought to have a pretty long lifespan owing to their large body size.

With regional differences, the mating season of gharials is between November and February and they breed once a year. When the male and female gharials meet, each uses its snout to rub the other and the males usually follow the females around his territory. The female raises her head towards the sky, an indication that she is ready to mate. The pairs remain submerged in water for about 30 minutes during copulation. Fertilization is internal (takes place inside the body of the female). Gharial eggs are laid in the dry season between March and May, prior to which, the females site a steep sandbank to dig a nest, which is basically a hole. These nests are situated about 10-16 ft (3-5 m) away from the water. A female gharial lays 28-60 eggs in the nest, usually at night. An incubation period of 60-80 days follows after which the young gharials hatch, just before the monsoons in July. The females protect the hatchlings for several weeks or at least until the monsoons subside.

The gharials have been given the status of Critically Endangered in the International Union for Conservation of Nature (IUCN) Red List. These critically endangered crocodilians are also listed in Appendix I of The Convention on International Trade in Endangered Species of Wild Fauna and Flora (CITES). In India, the Wildlife Protection Act of 1972 grants protection to the gharial crocodilians. Likewise in Nepal, these reptiles are under the full protection of the National Parks and Wildlife Conservation Act of 1973. Several reintroduction programs and captive breeding efforts have also been undertaken in India, Nepal, and other countries in an attempt to save the gharials. But despite all these gharial conservation endeavors, these reptiles continue to be prey to the senseless activities of humans leading to a fast decline in the numbers of these natural predators.

The gharials are among the largest crocodilians in the world. The average length of a gharial's body is around 19.69 ft (6 m). The females are usually smaller than males. The most spectacular physical attribute of the gharials is the presence of a long and slender snout that is specialized for catching fish. In fact, gharials are known as 'fish-eating crocodiles.' The shape of the snout keeps changing during the course of the lifetime of a gharial, usually becoming narrower and longer as the individual ages. Gharials have around 106-110 razor-like and sharp interlocking teeth in their jaws, out of which five are pre-maxillary (related to the upper jaw), 23-24 are maxillary, and around 25-26 are mandibular (related to the lower jaw) teeth. The males have a distinctive 'ghara' or bulbous growth at the end of their snouts. Further, since gharials are terrestrial, they have well-developed webbed feet and powerful, muscular tails for movement in the water. Gharials move on land by sliding on their bellies. The top of adult gharials is greenish-brown to dark brown in color and the lower side is white to yellowish-white. The young gharials usually have dark bands on their tail and body which gradually fade away with age. The body of gharials is covered in smooth scales.

Gharials have integumentary sense organs. It means that their sensory organs are located all over their scaly body in the form of tiny pits. These pits are helpful for detecting changes in water pressure or picking up vibrations, aiding the gharial predators in their search for prey. Integumentary sense organs in the head region are advantageous in allowing quicker transmission of nerve impulse. Night vision is made possible due to the presence of a reflective layer behind their eyes. Gharials also have good auditory sense and can pick up sounds of low frequencies.

How big is a gharial?

How fast can a gharial swim?

No exact figure is available but the gharial's powerful tail endows it with remarkable swimming abilities.

How much does a gharial weigh?

A female or male gharial does not have any distinct name.

What would you call a baby gharial?

Baby gharials do not have a specific name but can be referred to as 'juveniles.'

Gharials are not dangerous to humans. They can neither kill nor eat humans because their thin teeth and narrow jaws are unsuitable for attacking large animals.

Since gharials are not known to be aggressive or harmful to humans, but they are a wild animal so aren't ideal to be a pet.

The male and female gharials have different times of attaining sexual maturity; females reach sexual maturity when they are around eight years old and for males, it is 15 years.

The males have a lid of cartilage on their nostril called 'gharal' which produces a loud buzzing sound when flapped, used for courting females and defending territory.

Gharials are poached for their eggs, meat, skin, and the 'ghara' of the males.

Gharials are quite the dedicated parents. The females diligently protect their eggs during incubation and once the eggs hatch, the female protects the young ones from the river and predators. While males are not known to actively protect the young, they may carry the hatchlings on their back

Why are gharials endangered?

Gharials are endangered due to several reasons, such as damming and diversion of rivers leading to habitat loss, fishing and depletion of fish, agriculture and livestock herding on the river edges and sandbanks, and poaching of gharial eggs for their supposed medicinal properties.

Here at Kidadl, we have carefully created lots of interesting family-friendly animal facts for everyone. You can even occupy yourself at home by drawing one on our gharial coloring pages.