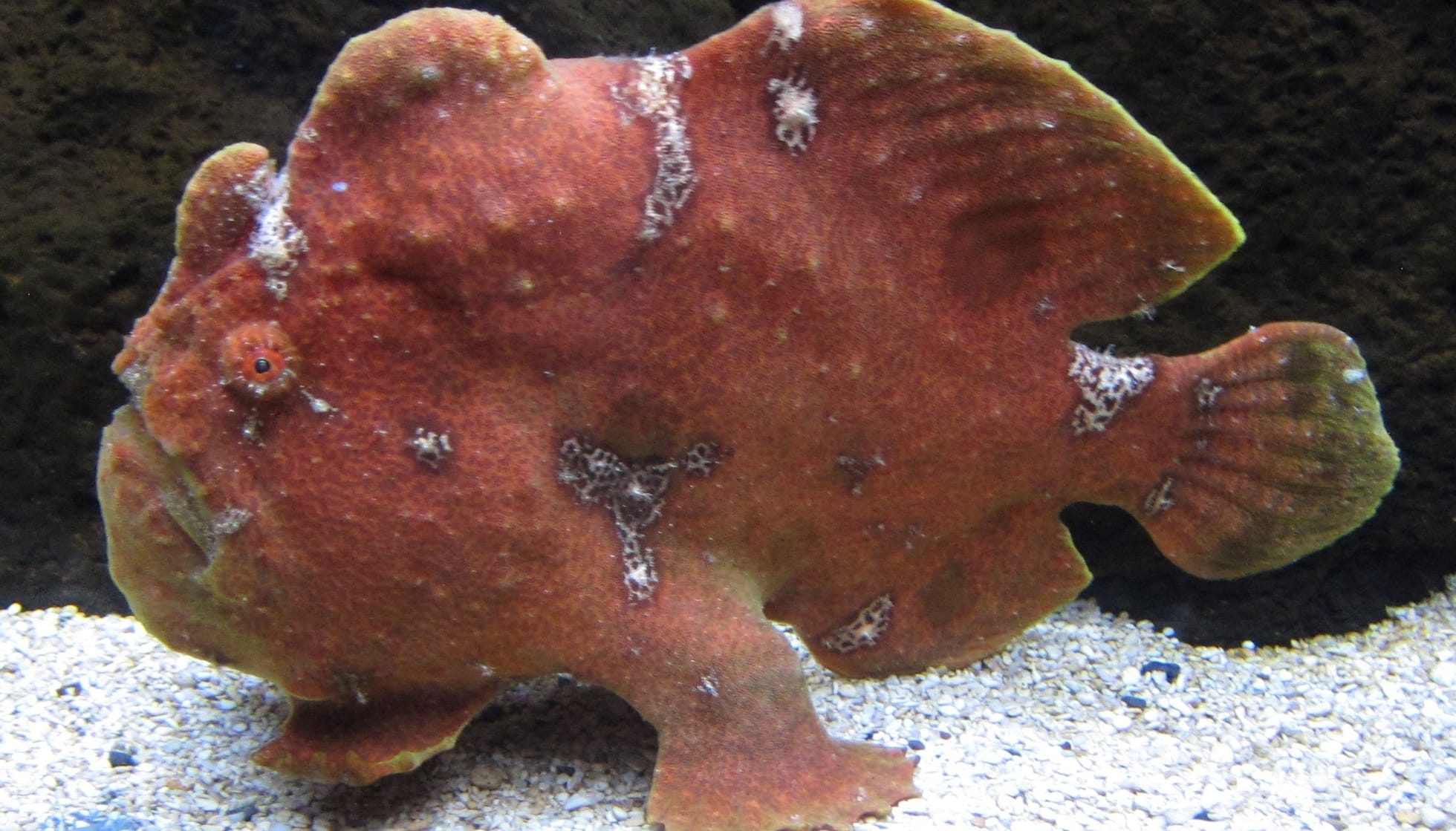 The Giant frogfish (Antennarius commerson), known as Commerson's fish, is of the Antennariidae family. This marine fish species is one among the 45 species of frogfish. They are poor swimmers and, they camouflage well around sponges. As they change colors according to the substrate they are around, their body has a wide range of colors. Their coloration includes black, gray, red, yellow, orange, cream, or brown. This characteristic allows them to camouflage well in their surroundings and escape predators. They resemble sponges as their body is sometimes covered with protrusions. The weight of these fish species is unknown. They cover a wide range of water bodies across Asia, Africa, North America, and Australia. These species can grow up to 15 in. They are carnivorous and attack any small fish they come across. They lure their prey using their dorsal fins. These fish species are found in public aquariums. It is a hard job to care for them.

You may also like to read our articles on blobfish and frilled shark facts if you enjoy this article.

What type of animal is a Giant Frogfish?

The Giant Frogfish (Antennarius commerson) is of the Antennarius genus. These fish species are carnivorous. The Commerson's frogfish lifestyle is mostly benthic. These fishes use camouflaging and mimicking techniques to capture prey or stay away from predators. They do not swim a lot. Instead, they walk or hop on their pelvic fins.

What class of animal does a Giant Frogfish belong to?

The Giant Frogfish is of class Actinopterygii of animals.

How many Giant Frogfish are there in the world?

The exact number of these frogfish species is unknown.

Where does a Giant Frogfish live?

These species are found in the Indian and Pacific oceans.

What is a Giant Frogfish's habitat?

These frogfish species occupy tropical and subtropical water, coral reefs, lagoons, sponges, and sheltered rocks. They are also found around jetty pillars, underwater ropes, or other structures at the depth of 230 ft (70 m) underwater.

Who do Giant Frogfish live with?

These frogfishes of the family Antennariidae live on their own.

How long does a Giant Frogfish live?

They survive up to 20 years in the wild.

These species come together only during mating season. The female starts swelling, which creates buoyancy and gets the attention of nearby males. The male nudges the female, and both reach the surface of the water. The female produces the eggs, which are then fertilized. The eggs that are released form a gelatinous raft. The male leaves as the female tends to attack them. Some females leave the raft to float, while others may carry and guard them until the eggs hatch. For about two months, the juvenile fish is pelagic, and they later settle on a coral reef.

The status of these frogfishes is still not evaluated as they are not threatened by overfishing. Some threats they might face are pollution and habitat loss.

The body of the giant frogfishes is expandable and globular. They have smooth skin that is covered with dermal spinules. The skin is covered with various types of protrusions, and they also have dark ocelli (tiny eyespots) that are similar to ones on a sponge. They can feed on prey as large as their body because of their large mouth that is prognathous. The body changes to a wide range of coloring depending on the environment. The different colors include black, gray, brown, orange, yellow, or cream. The illicium (first dorsal spine) is used to lure their prey and looks like a pink or brown-colored shrimp or small fish. The illicium is twice as big as the second dorsal spine. The second spine is straight and mobile, while the third spine is net towards the back. These two are attached to the head by a membrane. These spines are distinctive and are well-separated from a dorsal fin. Behind the fins, they have small and round gill openings. The pelvic fins help them 'walk' underwater. They have angled pectoral fins.

These frogfish species have sharp protrusions so, they do not look cute.

This frogfish species communicate by touch, smell, and chemical release.

How big is a Giant Frogfish?

How fast can a Giant Frogfish swim?

These frogfish species are slow swimmers. The exact data on their speed is not available.

How much does a Giant Frogfish weigh?

The weight of the frogfish species is not available.

There are no specific names given to these male and female frogfish species.

What would you call a baby Giant Frogfish?

There is no specific name given to the baby giant frogfish. They are usually referred to as juveniles.

Their diet consists of fish, crustaceans, and congeners. They have a large mouth so they can prey on species that are as big as themselves. They have also shown cannibalistic characteristics.

The giant frogfish is a popular variety of aquarium frogfish species. They need weekly care. They can be kept with non-aggressive and also bigger fishes.

The juvenile of the frogfish species is often confused with the Antennarius pictus and Antennarius maculatus. However, the A. pictus has ocelli all over the body and has three spots on their caudal fin. The A. maculatus has an orange or red edge on all the fins and several warts on the skin.

The giant frogfish do not change their color quickly like a chameleon but rather they take weeks to change.

As they can camouflage and lure their prey using deception, they are known to show aggressive mimicry. Apart from mimicking a sponge, or a coral, the frogfishes are capable of mimicking the venomous black urchins.

When they need to swim underwater, they use the technique of jet propulsion. First, they gulp some water and then, under pressure, release it through their back fins. This allows them to propel forward.

They are bright yellow-colored when they are young. These juveniles mimic toxic nudibranchs.

The frogfish was declared as 'the spawn of satan' by the mayor of Bitug, Indonesia.

The frogfishes are not poisonous and do not taste well.

The most ancient relatives of the frogfishes are the southern Australian handfishes. There is a group of 14 handfishes that are related to the frogfish.

The Lembeh strait, Indonesia has the highest diversity of these giant fish species.

How fast can a Giant Frogfish strike?

Even though these species are known to be slow-swimmers, they are ambush predators. This frogfish can hunt fishes that are as big as them. The giant frogfish camouflage really well in their surroundings, which only use to trap or lure their prey. Their upturned, big flexible mouth allows them to push their jaws and strike the prey in milliseconds. These fishes are the fastest strikers in the animal kingdom.

Do Giant Frogfish have teeth?

No. The giant frogfishes have no teeth. The big mouth expands up to 12 times the body size. In just about six milliseconds the giant frogfish creates a vacuum in water and swallow their prey in one piece.

Here at Kidadl, we have carefully created lots of interesting family-friendly animal facts for everyone to discover! Learn more about some other fish including Altum angelfish, or gulf toadfish.

You can even occupy yourself at home by drawing one on our Giant frogfish coloring pages.