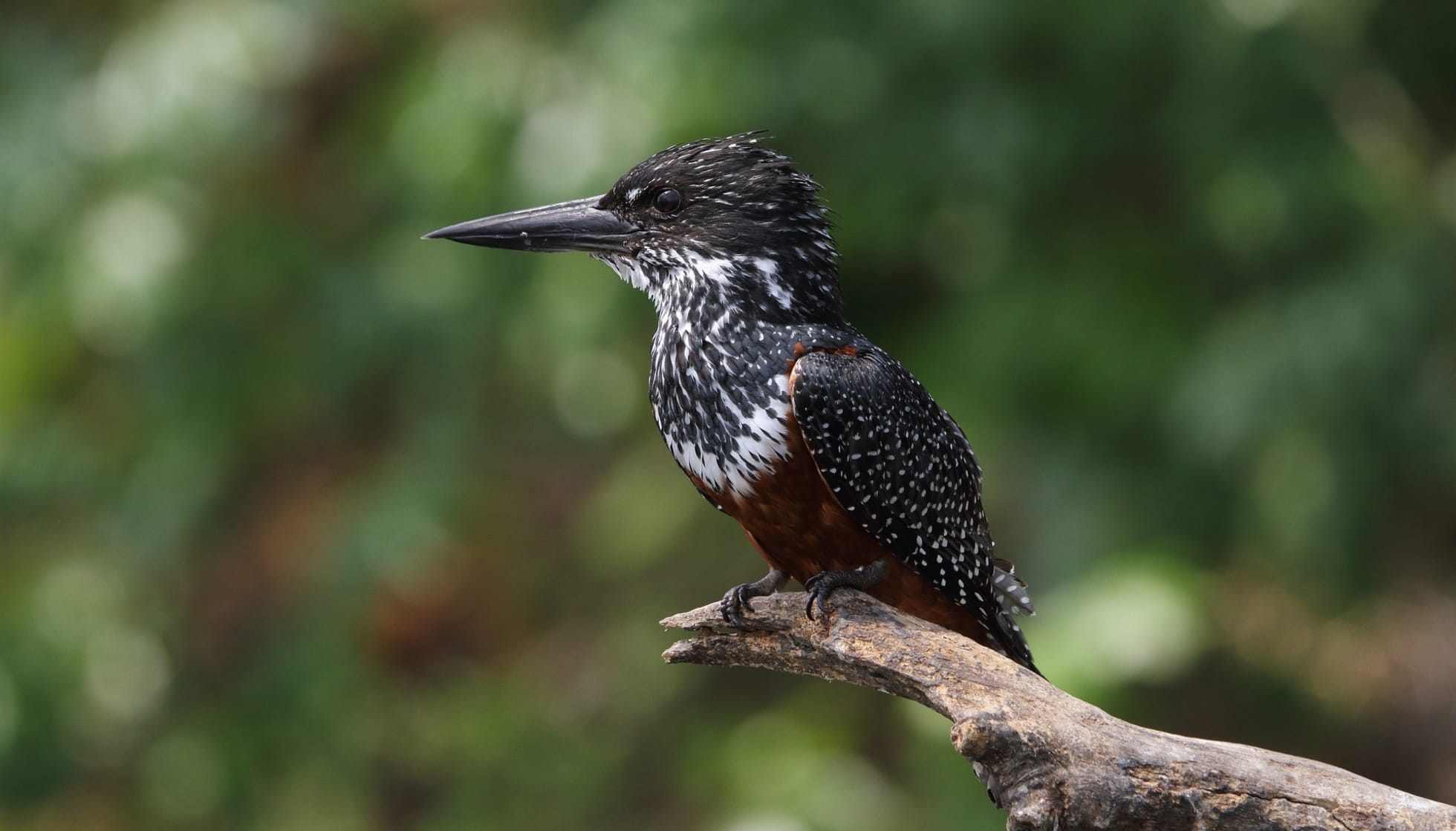 The giant kingfisher, Megaceryle maxima, is a stunning kingfisher belonging to the family Alcedinidae. They have two magnificent subspecies, namely M. m. maxima and M. m.  gigantea. These beautiful birds have white spots on their plumage with white-colored spots all over them. They have a wide crest, black bills, and legs that are dark in color, and there are certain distinctions between the male kingfisher and the female kingfisher. This kingfisher population is abundant in South Africa, south of the Sahara and it is a resident-breeding bird that lays its eggs in a constructed nest in a tunnel. This beautiful creature's length varies between 16-18.8 in (42-48 cm). Their weight ranges between 8.9-14.9 oz (255-425 g). Their diet includes fish, frogs, toads, and river crabs mainly. This kingfisher has a distinct style of catching prey which is quite surprising. They sit on a high perch and swoop inside the water to catch food!

If you found these facts captivating, you must read on to know more about these stunning kingfishers in detail like their habitat, reproduction, appearance, and much more!

If you like reading about these giant kingfishers, then why not read our articles about the belted kingfisher and common kingfisher as well?

Pesticides And Loss Of Habitat

What type of animal is a giant kingfisher?

The giant kingfisher, Megaceryle maxima, is a kingfisher species that is large in size that inhabits the continent of Africa. It belongs to the family Alcedinidae and is a member of the genus Megaceryle. They are carnivorous birds whose diet consists mainly of fish, frogs, toads, river crabs, small reptiles, and insects. These birds sit on a perch and dive steeply into the water from it to capture prey.

What class of animal does a giant kingfisher belong to?

How many giant kingfishers are there in the world?

The exact population size of these magnificent creatures is not known yet. However, this kingfisher species is abundant and prevalent across its range.

Where does a giant kingfisher live?

This bird can be spotted in savannahs and woodlands along streams, rivers, lakes, dams, and mountain streams with forested regions on the edges. It may also be found near stagnant pools, in dried-up rivers, as well as in estuaries, coastal lagoons, seashores, and mangroves.

What is a giant kingfisher's habitat?

One subspecies of this bird, M. m. maxima, chooses to live in a forested savanna, whereas M. m. gigantea is found in tropical rainforests. Except for the arid southwest, this resident-breeding bird can be spotted throughout much of Africa, south of the Sahara. Northern and eastern Botswana, northern Namibia, Zimbabwe, South Africa, and central and southern Mozambique are all home to this species.

Who do giant kingfishers live with?

The giant kingfisher, Megaceryle maxima, is a solitary bird. These birds are highly territorial about their homes as well. They reside in their range of territory, alone, and only fly around nearby.

How long does a giant kingfisher live?

The giant kingfisher, Megaceryle maxima, has a life span of between six and 14 years.

The giant kingfisher is monogamous in nature, meaning that the male bird of this species goes through the reproduction process with only one mate and vice versa. During the breeding period, these birds perform courtship displays which include certain types of flights, calls, and plumage displays. These birds mate throughout the period of July-January, particularly August-October. Their nest is constructed in a tunnel in a riverbank, a cliff, or a sand quarry. The tunnel is about 2 ft (60.9 cm) long and the opening of the nest is covert as it is beneath lots of plants. The female kingfisher lays between three and five eggs. The incubation of these eggs is done by both male and female kingfishers, which takes about 25-27 days. After the eggs hatch, the male kingfisher disposes of the eggs shells on the nest. The chicks are fed many times during the day, mainly with fish. Then the male stops feeding the chicks, but the female continues to do so for five days extra. The fledglings are able to dive at the age of 37 days.

The conservation status of the giant kingfisher is currently Least Concern as per the IUCN's Red List. Their population is abundant and widespread in their range of locations.

The giant kingfisher bird looks stunning due to its spotted plumage. They have either a chestnut breast or a white-spotted black breast, depending upon the gender. They look quite cute sitting on a high post.

It makes a loud, noisy, sharp 'kakh' or 'kee-o, kee-kee-o' call when flying. When annoyed, this bird makes a loud, blaring, harsh call, comprising either a singular 'kek' or a series of 'kek-kek-kek' sounds. Its gentler call sounds like 'kah-kah-kah', along with short, sharp 'keriri' sounds.

How big is a giant kingfisher?

The giant kingfisher ranges in length between 16-18.8 in (42-48 cm). It is four times the size of the Eurasian tree sparrow!

How fast can a giant kingfisher move?

The exact speed of this species of birds is not known. However, we do know that they are skillful fliers with a powerful flight as they can swoop in water to catch prey. They dive in shallow and steeply to catch fish. They go quickly go underwater to catch their fish, swallow it head-first upon capture, and then return to their perch!

How much does a giant kingfisher weigh?

Birds of this species have no specific names according to their gender.

What would you call a baby giant kingfisher?

Babies of this species can be referred to as chicks, hatchlings, or fledglings.

The diet of these birds consists of marine animals, frogs, toads, and river crabs mainly. They sometimes like to feed upon small reptiles and insects as well. Their predators are not known, but we know that the predators of the kingfisher birds include snakes, raccoons, domestic and wild cats, and foxes.

No, these birds pose no threat to humans. However, they do produce a loud noise if they are disturbed.

No, these birds can't be kept as pets and neither are they kept for sale in pet stores. They are a solitary species that prefer to be on their own in the sky.

The beak of a kingfisher is elongated and pointed, making it ideal for catching fish and other non-ground-dwelling prey.

Kingfisher birds are not rare in the UK, in fact, they are abundant in numbers. There are precisely 4,800 and 8,000 breeding pairs throughout the UK.

The beak of a kingfisher bird is elongated and pointed, making it ideal for catching animals in water and any other non-ground-dwelling prey. They also have excellent eyesight. Above everything, these birds possess stunning plumage patterns that are captivating to the eye.

Comparisons with other kingfishers

Here at Kidadl, we have carefully created lots of interesting family-friendly animal facts for everyone to discover! For more relatable content, check out these giant cowbird facts and giant ibis facts for kids.

You can even occupy yourself at home by coloring in one of our free printable Giant kingfisher coloring pages.