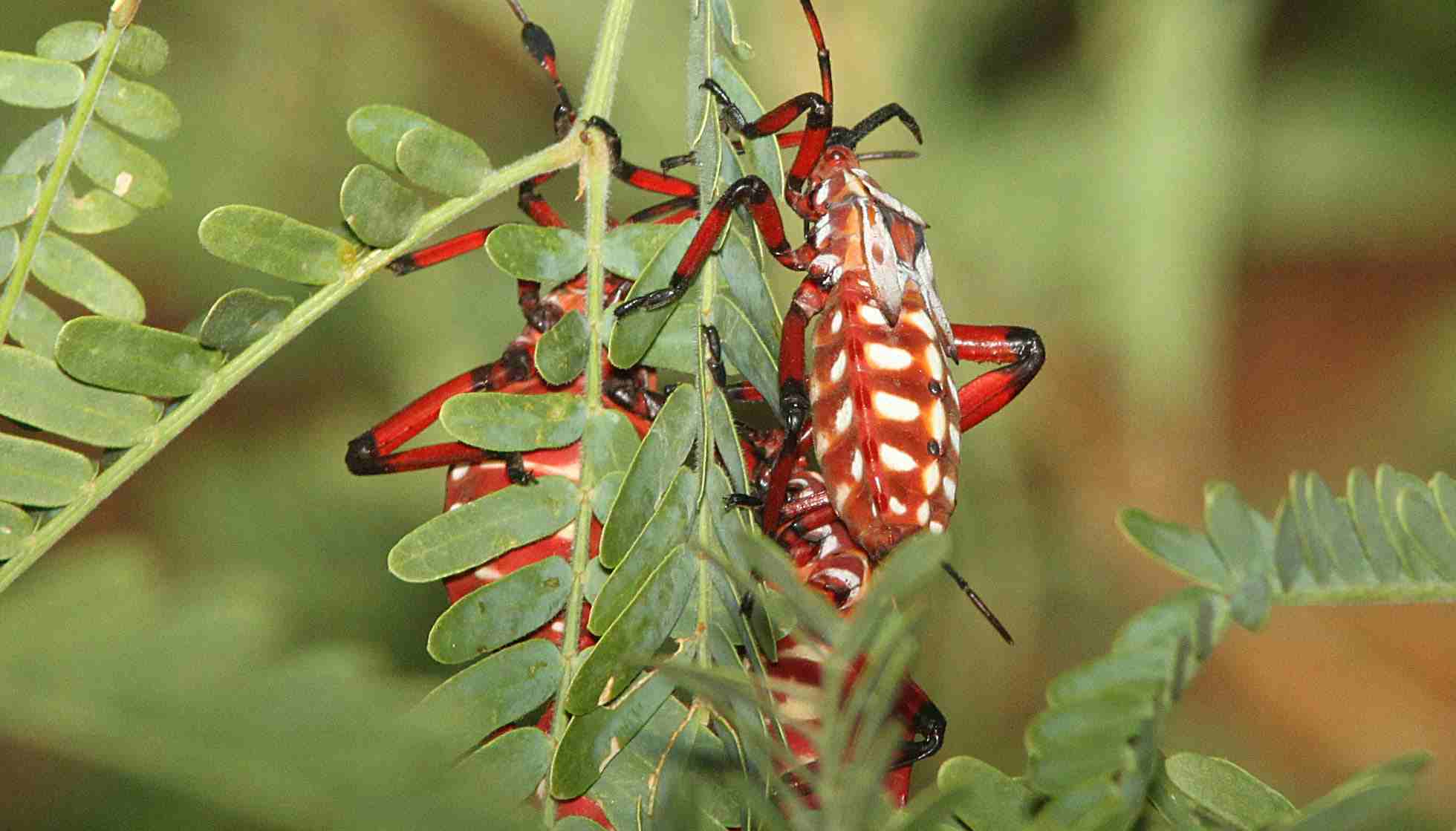 The giant mesquite bug (Thasus neocalifornicus) is a species of bug that belongs to the order of Hemiptera. They are commonly called true bugs. Their name originates from the fact that these large insects feed upon mesquite trees in Mexico and America's southwest regions. They are insects that are a member of the family Coreidae (leaf-footed bugs) and the genus Thasus. These insects are univoltine as they only reproduce once in a year. They are quite colorful and have earthy brown, white, black, orange, bright red, and green hues. Even so, they can be noticed easily. These large insects can easily be preyed upon by predators because of their size. This species can be spotted in the Sonoran Desert from Arizona to Baja California Sur, Texas, and Sinaloa and Sonora. Their length range is 0.59-1.57 in (15-40 mm). They feed upon the mesquite tree as well as inhabit mesquite trees, as their name suggests.  These true bugs do not cause any kind of harm to the tree. In fact, they help the tree. Want to know more? We suggest you keep reading!

If you like reading about giant mesquite bugs, you might also love our green stink bug and ghost ant animal facts as well!

Sugary seed pods and the sap of mesquite trees

Texas, The Sonoran Desert From Arizona To Baja California Sur, The Tucson Region Of The Usa, Sinaloa

What type of animal is a giant mesquite bug?

The giant mesquite bug (Thasus neocalifornicus) is a bug that belongs to the family Coreidae leaf-footed bugs and the genus Thasus. They are a herbivorous species that has colorful and patterned wings.

What class of animal does a giant mesquite bug belong to?

This true bug belongs to the class Insecta.

How many giant mesquite bugs are there in the world?

The exact population of this species hasn't been evaluated yet, but these bugs are abundant in their populations at the locations they exist in.

Where does a giant mesquite bug live?

This insect inhabits mesquite trees of the Sonoran Desert from the southwest region of Arizona to Baja California Sur in Mexico. Their populations are determined by season. These colorful tree-dwelling creatures have also been spotted in Sinaloa and Sonora of Mexico and in Texas. The majority of their overall population occurs in the Tucson area of the US, and around Mexico's Baja California Sur's southern tip.

What is a giant mesquite bug's habitat?

As their name suggests, this colorful insect is spotted on mesquite trees commonly. However, they can also be spotted around landscape plants in a garden. During the summer, they have been observed migrating to the mesquite tree's base.

Who do giant mesquite bugs live with?

This bug (Thasus neocalifornicus) can be commonly spotted in the months of May to August in the southwest region of the desert on a mesquite tree. They are seen usually in family groups with adults and nymphs living together.

How long does a giant mesquite bug live?

Their breeding season starts in October with the female adults laying sets of 12 eggs beneath the bark of the mesquite tree. In the season of spring, these nymphs hatch. The nymphs are heavily patterned and their colors are more vibrant. The nymph of these insects does not possess wings. The blue stubs on the nymph will later develop into wings.

The conservation status of these bugs has not yet been evaluated by the IUCN as they have an abundant population.

These insects are red and black. Nymphs have vibrant colors which get hidden behind their wings when they become adults. Males have large legs at the back that have bumps and females' legs are smooth and thin. The legs of the male as well as of females both have black and red stripes. These colorful creatures also have antennae with flattened discs near the tip of them. At the back part of the wings, there are pale yellow veins crisscrossing.

These bugs are quite cute thanks to their vibrant shades and harmless nature. Their nymphs are especially very cute because of their extra vibrant colors.

These insects emanate a smelly gas so as to ward off their predators. They communicate via pheromones, to which, the nymphs do not respond.

How big is a giant mesquite bug?

The speed of these bugs is not known. However, we do know that these bugs are tree-dwellers that can climb trees efficiently.

How much does a giant mesquite bug weigh?

The exact weight of giant mesquite bugs has not been evaluated yet. They are a comparatively larger size than other insects such as the yellow jacket wasp.

Adult male and female bugs don't have a specific name according to their gender.

What would you call a baby giant mesquite bug?

Babies of adult giant mesquite bugs are known as nymphs or young.

These insects feed upon sugary seed pods and the sap of mesquite trees. Their major predator is the pallid bat. They ward these bats off by emanating smelly gas. This bug eats enough to grow and because of its feeding, it most likely helps to induce greater tree growth. Mesquite twig girdlers and borers are the bugs that kill mesquite trees as they chew through the wood of these trees.

No, these cute little insects are not harmful to humans or any other animals.

These red and black bugs make good pets if their food needs are taken care of.

This insect is the only member of the Thanus genus to exist in the United States of America.

No, these red and black colored creatures do not bite

Why do giant mesquite bugs die?

These patterned bugs have a short lifespan of eight months. So, it is natural for them to die after few months. However, some humans kill them if they are present in large numbers because of the smelly gas they emit.

Here at Kidadl, we have carefully created lots of interesting family-friendly animal facts for everyone to discover! For more relatable content, check out these wheel bug facts and stick bug facts for kids.

You can even occupy yourself at home by coloring in one of our free printable Giant mesquite bug coloring pages.